OPINION: It’s time for a new US border policy

Numbers suggest the world is facing an unprecedented “displacement crisis” 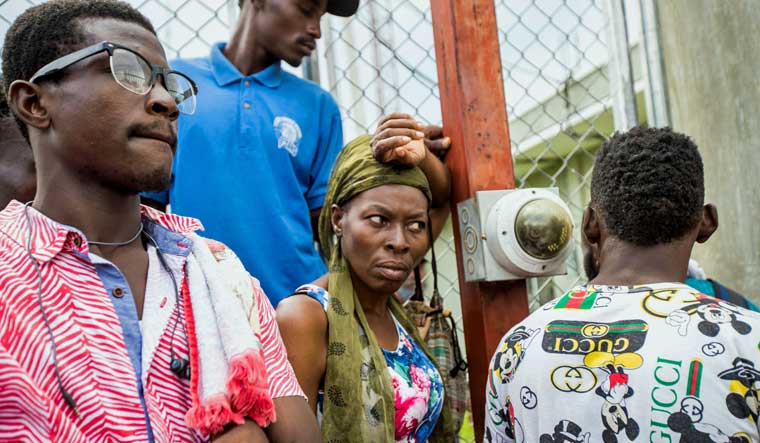 Haitian migrants who were flown out of Texas by US authorities wait outside of Toussaint Louverture International Airport for processing by Haitian authorities, in Port-au-Prince, Haiti September 22, 2021 | Reuters

Overturning Trump’s cruel border legacy has proved more challenging for the Biden Administration than many had hoped for. A report by the Pew Research Center stated the number of migrants encountered at the US-Mexico border is at a 21-year high, with nearly 200,000 encounters by US Border Patrol in July 2021 alone. The recent spotlight on the cruel treatment and abuse by Border Patrol agents towards the thousands of Haitians living in an encampment in Del Rio, Texas came as a shock to many, as have reports of mass deportations and detentions. Critics and advocates have been assessing the situation in Haiti to understand the reasons behind Haitians fleeing their country in such great numbers, looking at this situation as a unique case study. But to understand what is happening with Haitians at the US-Mexico border, a wider discussion about US immigration policies, the motivations behind these policies, and what alternatives exist beyond the strict punitive modality of enforcement is needed.

Let’s start with the numbers. The last time the US saw the number of border crossings higher than current numbers was in March 2000, before 9/11. A quick glimpse of the border crossings in the years pre and post 9/11 show similar migratory patterns, with numbers rising in the spring and summer months. This suggests that US border crossing patterns were similar to current numbers, countering the claim made by political pundits that the U.S. is facing an “unparalleled” border crisis. While today’s numbers are high in comparison to what was seen during the Trump years and subsequent pandemic, this is largely due to restriction of entry and the backlog of thousands of people waiting to apply for asylum.

A deeper look at the numbers gives us an even more interesting picture. The World Migration Report states that just under 3.5 per cent of the world’s population moved across a border in 2020, a number that has been largely unchanged in a decade. Studies showing averages of migratory movements going back centuries has remained between 2.8 per cent and 3.5 per cent. These numbers paint a very different picture from what political hysteria often leads us to believe, that “floods” of people are moving currently, when in fact, 96 per cent of the global population doesn’t move at all.

The caveat of course is, in times of actual crises, when people are forced from their homes. The United Nations High Commission for Refugees (UNHCR) reports that 2020 had the largest number of forcibly displaced ever recorded, with over 80 million people fleeing war, violence, and persecution. Refugees have sought safety from countries that span the globe, from Myanmar and South Sudan to Syria, Afghanistan, and yes, Haiti. These numbers don’t include climate-induced migrations or those due to natural disasters, suggesting that the world isn’t currently faced with a “migration crisis,” but rather is faced with an unprecedented “displacement crisis.”

Most of the world’s refugees do not seek asylum in countries like the US, UK or Europe, despite what populist leaders might say. The UN reports that 86% of the displaced seek refuge in low-income countries which neighbour their countries of origin. Countries such as Bangladesh, Jordan and Uganda each host millions of refugees, and have for decades. The high numbers of people currently requesting asylum at the US-Mexico border raise the question of why there isn’t a more concerted humanitarian effort by the US, Mexico or the UNHCR to screen and process asylum-seekers as required by international law.

International law dictates that countries who are signatories to the 1951 Refugee Convention must allow anyone who seeks asylum the right to enter their country to apply. The Trump Administration did nearly everything in its power to circumvent and outright rebuke these laws, passing a dizzying number of restrictive immigration policies. Arguably, the most damaging directive was the Zero Tolerance policy, which stated all migrants crossing the southwest border were to be criminally prosecuted and detained, regardless of whether they were seeking asylum and forcibly separated children from their parents. While child separations were halted after few months due to public outcry, aspects of the policy currently remain in place to this day, including the “Repeat Offender” clause. The clause requires criminal prosecution and even detention of migrants who have been deported once already and who are caught reentering. The catch to this policy: it includes the thousands of people who were expelled due to Title 42, another Trump-era policy that required immediate deportation of border crossers for due pandemic-related reasons. The Biden Administration upheld Title 42 despite pushback from legal advocates, thus not only barring due process of asylum seekers but criminally charging and detaining them if they choose to reenter.

The US does not live in a bubble but is part of an international community. The number of migrants seeking asylum at their border is not unique to this time or place. Immigration reform should include not only basic compliance with national and international asylum laws but should also move away from criminalizing migration as a whole, unburdening a system obsessed with detaining and forcibly deporting people. Some recommendations include the following:

First, the US should join the majority of democratic nations of the world in signing the 2018 UN Global Compact for Refugees and the Global Compact for Safe and Orderly Migration, ensuring the rights of all people are being acknowledged and respected. Second, the US should implement more humane and effective alternatives to detention, such as reinstating the case management programs, used in previous administrations and other countries. And finally, a more robust refugee processing system along the US-Mexico border should be considered, with assistance from the UNHCR. There is certainly danger in proposing such an intervention, as refugee camps are known for creating large-scale protracted encampments where people are often dependent on aid for decades. But if the alternative is that people are falling prey to detention, expulsion, or lack of shelter, perhaps it is worth visiting this idea.

Kelsey LeBrun Keswani is the co-founder of RAIN (Refugee Assistance and Information Network). Currently, she is a PhD candidate for migration studies and political science at Institute of Social Sciences University of Lisbon, Portugal