Nearly million deaths, $8 trillion costs: US wars after 9/11 in numbers

Figure of $8 trillion does not include the money spent on aid to Afghanistan, Iraq 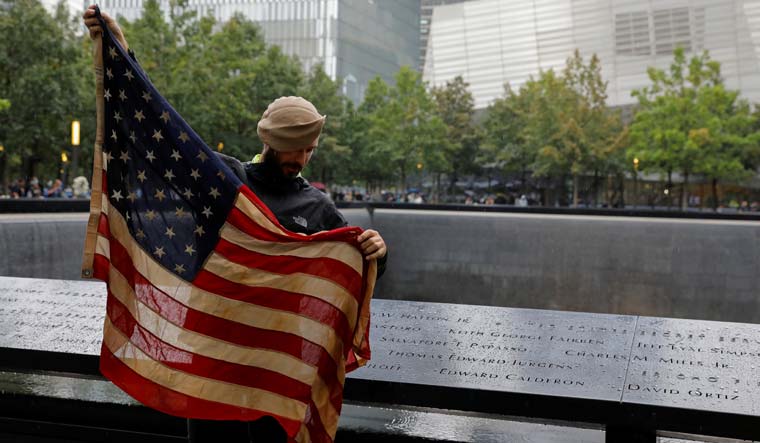 Jeremy Provancher, who served in Afghanistan with the Army 275 Ranger Regiment, carries a U.S. flag that was used in Afghanistan, as he visits the 9/11 Memorial | Reuters

The terrorist attacks on the US on September 11, 2001, can be considered a watershed moment in the 21st Century. Its importance in defining the future course of global events is, perhaps, on par with the Russian revolution or the fall of Nazi Germany and atomic annihilation of Nagasaki and Hiroshima.

Two major wars, interventions by the US and NATO in numerous other countries, rise of new terror outfits and new geopolitical alliances and rivalries have marked the responses to 9/11 in the past 20 years.

In 2010, a group of scholars at the Watson Institute for International and Public Affairs at Brown University in Rhode Island began work to chronicle the costs of the US interventions in Iraq and Afghanistan and related violence in Pakistan and Syria. The team, called 'The Costs of War Project', recently released figures of the costs incurred by the US and others in responding to 9/11.

The budgetary costs of the post-9/11 wars incurred by the US federal government was estimated by The Costs of War team to be over $8 trillion. Successive US governments, including the Joe Biden administration, have sought $5.8 trillion to react to the 9/11 attacks. This includes expenditure on war zones, homeland security and interest payments on war borrowing.

"The research team’s $8 trillion estimate accounts for all direct costs of the country’s post-9/11 wars, including Department of Defense Overseas Contingency Operations funding; State Department war expenditures and counterterror war-related costs, including war-related increases to the Pentagon’s base budget; care for veterans to date and in the future; Department of Homeland Security spending; and interest payments on borrowing for these wars," Brown University said in a statement.

Future medical care and disability payments for veterans would likely exceed $2.2 trillion, according to The Costs of War project, making for a figure of about $8 trillion in current dollars. The Costs of War project noted the figure of $8 trillion does not include the money spent on humanitarian assistance and development in Afghanistan and Iraq or expenditure by US allies.

The Costs of War project notes the death toll in the wars after 9/11 is between 897,000 to 929,000 people. This includes "US military members, allied fighters, opposition fighters, civilians, journalists and humanitarian aid workers who were killed as a direct result of war, whether by bombs, bullets or fire".

A total of 7,052 US military personnel have died in the post-9/11 conflicts, with Iraq (4,598 deaths) and Afghanistan (2,324) accounting for the most fatalities. Highlighting the role played by private 'contractors' in the conflicts, a total of 8,189 contractors have lost their lives in these conflicts. Again, Afghanistan (3,917 deaths) and Iraq (3,650) account for the most fatalities.

Civilians account for the largest category of deaths. Civilian fatalities are estimated to be between 363,939 to 387,072, with Iraq accounting for approximately 208,964 deaths, the highest figure for a single country.

The Costs of War project states this figure exceeds people displaced in all conflicts since 1900, with the exception of the Second World War. The researchers caution the figure of 38 million is a "conservative" estimate, noting the the actual number could be closer to 49 million-60 million, rivalling the refugee numbers seen in the Second World War.