For a photojournalist, death can come from anywhere in a conflict zone

Staying alive in a conflict zone is a test of luck, caution and ground realities 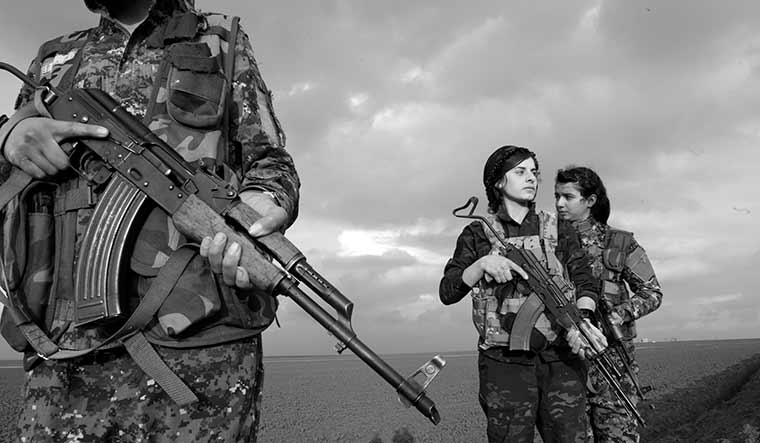 I have never worn a bullet-proof vest or an armoured helmet on my assignments in warzones. I have been to conflict zones in Iraq many times and North-Eastern Syria in 2019.  I have missed the peak of gunfights as my assignments were either scheduled either before or after the active fighting on the frontline. But believe me, in a conflict zone, the danger of dying from ambush, collateral damages or getting kidnapped for ransom can come in any form at any time.

Under such conditions, taking a step back before taking two steps forward, can spare you to tell more stories.

Conflict zones are generally chaotic places. If you are an outsider, you stand out and moving around on your own is impossible as language is a barrier. Hence, journalists covering in these areas are either embedded with the government forces which is seen as a relatively safe method. The foreign correspondents' visuals you see on television are mostly broadcasted from safe places or from within their compounds in the fortified cities. But the job of a photojournalist is not easy, whether you work for a news agency or news magazine—if you are assigned to cover such events, you ought to be in the middle of the action. You can not show ground realities sitting inside a hotel room.

In such situations, you are completely dependent on the translator and security contractors you have hired. The camera is considered a lethal weapon by perpetrators as you are going to tell the atrocities of the war to the world. A photojournalist covering a conflict is always caught between the crosshairs of the warring parties.

Conflicts zones like Iraq, Syria and Afghanistan are playgrounds for extremists and experimental grounds for many nations trying to gain influence on their people or in the region. In such a situation, it's best for a photojournalist to do a bit of groundwork and understand the geopolitics before jumping into action. Every person you meet can bring you a sense of suspicion and every time you go to meet a new person could seem like the last day of your life. Honestly, if you are that alert, you might survive another day to tell stories.

Many times, it is only luck that can save you. Our trip to Syria was delayed by one week. In 2019.  When we checked into the only decent hotel in the city centre, my translator pointed out the window and told me, “that black smoke on the wall down your room is because of a car bomb".  Three car bombings in the city had killed six people and injured many a week before. Prior to that, Turkey had been shelling this border town for weeks. Had our travel not been delayed by a week, we would have been caught in a blast.

But the photojournalist mentality is such that regretted not being there a week earlier!

My first trip to Iraq was to cover the conflict when US troops were pulling out of the country in 2011.  At the time, all of Baghdad was facing constant bombings. Even the secured green zones saw regular rocket attacks.

I was not embedded with any fighting forces not had I gotten any journalist accreditation. Stories were done with the help of our sources. Whenever my translator and driver spoke in Arabic, I felt fearful. Because, those days no one trusted each other in Iraq. But, I was lucky to have a  good driver who rescued me repeatedly from being arrested by security forces by calling me an 'important'  person inside the green zone. Many times he alerted me to hide my camera while we were crossing dangerous regions inside Iraq.

Photojournalists covering assignments in conflict zones usually go through a hostile environment training before embarking on assignment but in war zone assignments you are not sure when you will become a story while you put your life at risk to tell a story of the war and its effects.