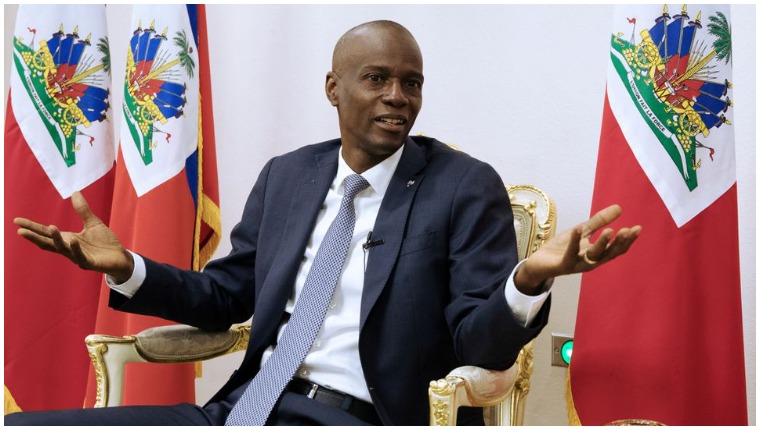 Haitian President Jovenel Moise was assassinated after a group of unidentified people attacked his private residence on Tuesday.

Moise's wife, First Lady Martine Moise, is hospitalised.  Interim Premier Claude Joseph condemned what he called a “hateful, inhumane and barbaric act,” adding that Haiti's National Police and other authorities had the situation in the Caribbean country under control.

Moise, who is survived by his wife and three children, was virtually unknown before he became president in 2017.

Under Moise’s rule, the Caribbean nation, which was already in a tumultuous situation, went into a spiral of instability and violence. Haiti, the world’s first Black-led independent republic, has witnessed several foreign interventions, coups and dictatorships. Few of its attempts in establishing democratic rule have failed.

Moise entered the political scene, promising people that he would fight corruption and end unemployment. During Moise’s term in office, Haiti saw an increase in kidnappings, gang violence and a political standoff.

The police have arrested “presumed assassins” of president Moise, Secretary of State for Communications Frantz Exantus said. Exantus did not give any further details regarding the arrest. Interim Prime Minister Claude Joseph has called the assassination, “a highly coordinated attack by a highly trained and heavily armed group”,

Moise, who was handpicked by former President Michel Martelly as the ruling Tet Kale party’s candidate in the 2015 elections visited all of Haiti’s 145 communes while campaigning. Known to be soft-spoken, Moise wasn’t poor, neither was the elite.

His father was a small-scale farmer and businessman. His mother helped sell their crops and worked as a seamstress, an AFP report reads. Moise campaigned under the nickname, ‘Neg Bannan Nan’ or ‘Banana Man’ in Haitian Creole and during his campaigns, spoke about the banana-exporting venture he started with help of a $6 million loan, which was approved by Martelly’s administration.

Though Moise won the presidential vote in 2015, he couldn’t take office until February 2017. The 2015 results were overthrown after allegations of fraud. Haiti was in a state of political limbo until elections could be held in November 2016, which he won.

Interim Prime Minister Claude Joseph said the police and military were in control of security and has asked for international assistance in Moise’s killing. There is fear of Haiti, one of the poorest nations in the Americas plunging into a state of chaos following Moise’s assassination.

Joseph in the meantime has pledged to work with Moise’s allies and opponents and said that elections, which are scheduled to be held in September should be held. Moise’s opponents had been accusing him of increasing authoritarianism. Amid a surge in coronavirus cases, anti-government protests had been taking place. Authorities on Wednesday shuttered the airports and declared a ‘state of siege’. Moise was killed a day after he nominated Ariel Henry, a neurosurgeon, as the new prime minister, an AP report reads.

There was a dispute over when Moise’s term would end. While Moise and his supporters said that his term ended in 2022 as he took over in 2017, opposition leaders have said that Moise’s term ended in February 2021 as former president Martelly stepped down on February 7 2016. Moise’s government had failed to conduct legislative elections in 2019 and was largely ruling by decree.

After Moise became president, there have been several calls for him to step down, especially after he passed a few decrees, including one that helped create an intelligence agency that answers only to the president and one that limited the powers of a court that audits government contracts.

According to Haitian authorities, an attempt to overthrow Moise and murder him was foiled in February 2021. On February 7, the Opposition called for countrywide protests. And formed a parallel government with Joseph Mécène Jean-Louis, a Supreme Court Judge, as the interim President.

Haiti had been at the peak of political unrest in recent months. Widespread anti-government protests had paralyzed the country. Inflation had been spiking. Gangs were gaining more power in the capital city of Port-au-Prince. On June 29, 15 people were killed in a shooting rampage in the capital city of Port-au-Prince. In June, gangs ransacked and set fire to several homes displacing over 14,700 people.