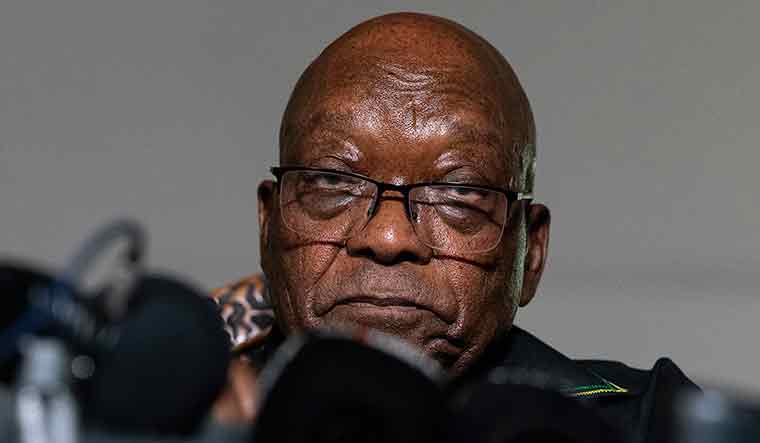 Jacob Gedleyihlekisa Zuma rose to the presidential post in 2009 as the fourth democratically elected president of South Africa and remained in office till 2018. His reign is riddled with many complexities and corruption charges. His rise to power and resignation as the president came with a lot of drama intertwined.

Cyril Ramaphosa was elected to succeed Zuma as president of the African National Congress (ANC) and the following months saw pressure for Zuma's presidency which ended with ANC recalling him as the president. Upon facing the no-confidence motion in the parliament, he resigned in February 2018.

Zuma had faced many legal challenges before, during, and after his presidency ranging from rape cases, embezzlements, corruption, and fraud among many others. Earlier on Thursday, Jacob Zuma turned himself in and is currently serving his 15-month sentence for contempt of court. The constitutional court handed him the sentence over his refusal in responding to corruption probes.

Of all the corruption issues charged against him, the most prominent is the involvement of the Gupta family. This family, with their roots in Uttar Pradesh, migrated to South Africa in 1993. The prominent members of this family are the three brothers--Ajay, Atul, and Rajesh Gupta as well as Atul's nephews Varun.

Their enterprise mainly comes under Oakbay Investments Ltd, established in 2006, under which they had companies in various industries ranging from mining to real-estate to news and media. Their relationship with Zuma, popularly known as Zuptas, has caused issues over the years and without doubt is a complicated one.

The prominent issue that came to light was the Sun City wedding in 2013 where the family plane carrying the wedding guests landed on the Waterkloof Air Base, a military base normally reserved for visiting heads of state and diplomatic delegations. In 2017, they were called out for the Vrede farm project where a chain of leaked emails connected the Guptas to government funds which were directed into the personal account of Atul Gupta. Later in 2018, the Bell Pottinger got caught up in the 'white monopoly' issue, leaving one of the UK’s leading PR firms knee-deep in scandals. The Guptas were called out for allegedly causing racial tensions by creating fake Twitter pages that emphasised the power of white business and even popularised the hashtag #whitemonopolycapital. The firm was reportedly paid £100,000 a month by Oakbay Investment and the whole debacle was said to divert the issues at hand, which was the corruption claims between the Gupta family and Zuma.

On the other hand, Bongi Ngema-Zuma, one of the former president’s wives, worked as a communications officer at JIC Mining Services, one of Guptas’ enterprises. Reportedly her 3.8m rand Pretoria mansion was paid by the Guptas. Duduzile Zuma, his daughter, was a director at Sahara Computers, the first undertaking by the Guptas in South Africa. Similarly, Duduzane Zuma, his son, served as the director of some Gupta-owned companies. Both have stepped down from their roles following public pressure.

The Gupta family for long has been at the centre of attention with their alleged accusations of exerting power over cabinet appointments which the family outright denied, despite many coming forward. Several of the lucrative contracts with state-owned conglomerates were signed with companies in the Gupta enterprises.

The South African prosecutors have called in the Gupta Brothers as they were allegedly in the centre of a web of corruption since the time of Zuma’s presidency. The chief investigator, Hermione Cronje has told the public that a red notice has been issued by Interpol against two of the brothers, Rajesh and Atul along with their wives. The third brother, Ajay, who is not named on the red notice is linked to yet another pending case. The former is sought out for their connections in a $1.76 million contract paid to Nulane Investments, a company linked to the Guptas to conduct an agricultural feasibility study. The South African courts have frozen their assets and the brothers are currently said to be in self-exile in UAE while the rest of the family is in India.