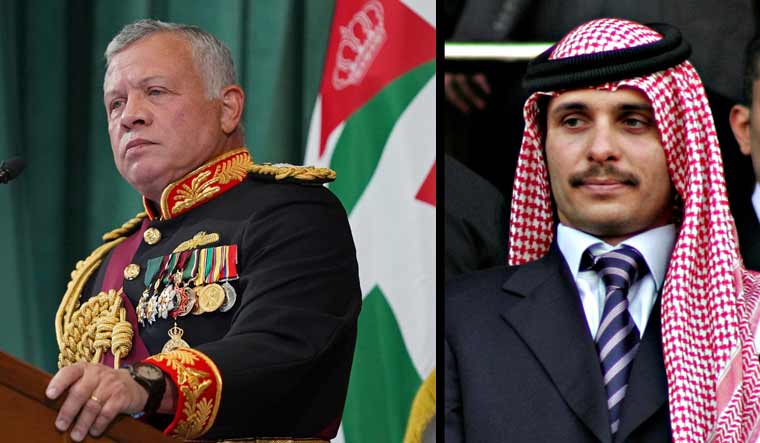 The house arrest of Jordan’s former Crown Prince Hamza bin Hussein on Saturday by the military, on allegations that his actions threatens the country’s “security and stability”, has led to an outpouring of support for King Abdullah by allies including the US, Saudi Arabia, UAE, Egypt, Bahrain and even Israel’s defence minister.

Jordan’s military confirmed that it had ordered Prince Hamza to stop actions that could be used to target Jordan’s “security and stability”, after the prince himself uploaded a video saying he had been placed under house arrest. In the video, Prince Hamza accuses Jordan’s leaders of corruption.

“I am not the person responsible for the breakdown in governance, the corruption and for the incompetence that has been prevalent in our governing structure for the last 15 to 20 years and has been getting worse... And I am not responsible for the lack of faith people have in their institutions,” he said in the video message.

"It has reached a point where no-one is able to speak or express opinion on anything without being bullied, arrested, harassed and threatened."

According to the BBC, the move to detain Hamza came after he met with tribal leaders and reportedly garnered their support. The “Herak”, a pro-democracy gathering, have been protesting corruption in Jordan since the 2011 Arab Spring. Protests against corruption by Herak members in recent weeks have been met with crackdowns and arrests.

Hamza, 41, was removed from his title as crown prince in 2004 by King Abdullah, his half-brother who has ruled the kingdom since 1999. King Abdullah named his own son Hussein as heir apparent. The ruling Hashemite dynasty claims lineage from the Prophet Muhammad.

As a key US ally, Jordan promptly received the support of the Joe Biden administration. “We are closely following the reports and in touch with Jordanian officials. King Abdullah is a key partner of the United States, and he has our full support,” U.S. State Department spokesman Ned Price said in an email, Reuters reported.

Israeli Defence Minister Benny Gantz said that Israel was prepared to assist Jordan as necessary, though he described the incident as an internal issue for Jordan. “A strong and flourishing Jordan is a security and economic interest for us, and we need to do what we can to help them,” Gantz said, Times of Israel reported.