Trump likely to be acquitted in impeachment trial 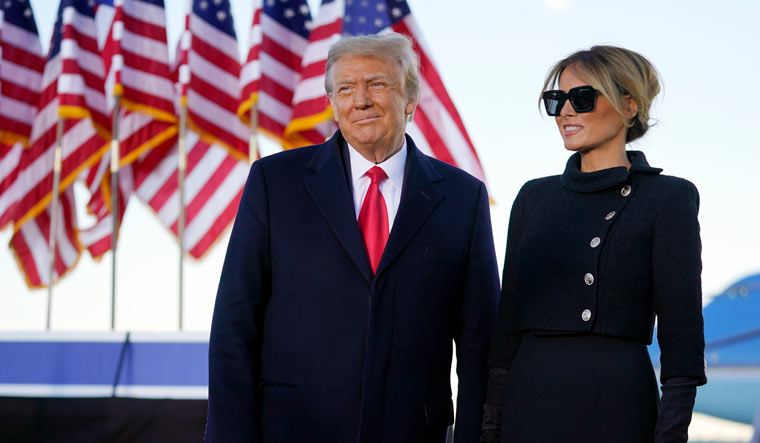 Former US President Donald Trump is likely to be acquitted in his impeachment trial as the Democrats failed to garner enough support required from Republican Senators.

The Democrats who have impeached Trump in the House charging him with "incitement of insurrection," needs two-thirds of the vote for the Senate impeachment. Currently both the Democrats and the Republicans have 50 members each in the 100-seat Senate.

The Democrats need the support of at least 17 Republican Senators to reach the two-thirds majority mark.

Trump is the first US president who facing an impeachment trial after he left the presidency.

This is for the second time in about a year that Trump is likely to be acquitted by the Senate.

I can't see how you get 17. I think that was a test vote, Republican Senator John Boozman said after 45 of the 50 Republican Senators voted for the motion that the impeachment trial of Trump after he left the presidency is unconstitutional.

The article of impeachment was delivered by the House to the Senate Monday night.

The next step, as you all have reported and people watching at home know, is for the Senate to proceed with their trial. He's going to allow them to move forward at the pace and manner that the leaders in the Senate determine.  And I can promise you that we will leave the vote counting to leaders in the Senate from now on, White House Press Secretary Jen Psaki told reporters at her daily news conference.

Republican Senator Kevin Cramer said the Senate should not be wasting its time holding another impeachment trial.

We do not have solid constitutional standing to impeach a former president, and even if we did, this is not the time to use it. As I have said repeatedly, President Trump's comments on January 6 were rash and ill-advised but I do not believe they meet the constitutional standard for impeachment, he said.

Senate Majority Leader Chuck Schumer argued that Trump can be impeached even after he left the office and this he said is constitutional.

The theory that the impeachment of a former official is unconstitutional is flat-out wrong by every frame of analysis: constitutional text, historical practice, precedent, and basic common sense. It has been completely debunked by constitutional scholars from all across the political spectrum, he said.

Former President Trump committed, in the view of many, including myself, the gravest offense ever committed by a president of the United States. The Senate will conduct a trial of the former president and Senators will render judgment on his conduct, Schumer said.

Republican Senator Rob Portman who sided with the Democrats said he voted for allowing debate on this issue and against tabling this important discussion.  As the trial moves forward, I will listen to the evidence presented by both sides and then make a judgment based on the Constitution and what I believe is in the best interests of the country, he said.

Trump may have lost his social media megaphone, but, a week after leaving the White House in disgrace, a large-scale Republican defection that would purge him from the party appears unlikely.

Several party members have shown hesitancy to publicly defend Trump inciting riots at Capitol Hill. Some Republican leadership still believe, despite the mistake Trump made after the November election, the policies Trump championed and victories he won from judges to regulatory rollback to life to tax cuts were too great to allow the party to leave him on the battlefield.

The effort to remove a president who is no longer in office raises serious constitutional questions and threatens to delay national healing. This article of impeachment was rushed through the House of Representatives shortly after the Capitol riot without hearings or any careful consideration of evidence or precedent, he said. PTI LKJ   RDK RDK 01270815