Outrage over Trump's response to the Capitol riots is snowballing 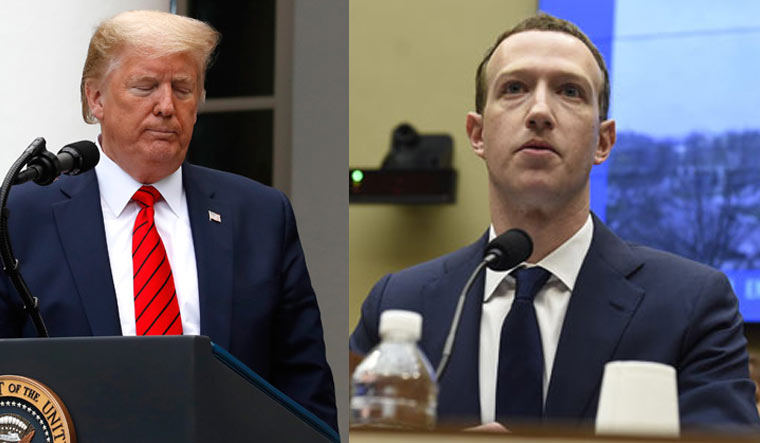 In the extraordinary aftermath of the storming of the US Capitol building, social media platforms that for years have given Trump a large audience and relatively free reign on their platforms are saying, “No more.”

Facebook CEO Mark Zuckerberg has announced that the block on Trump’s use of the Facebook and Instagram platforms would continue for the remainder of his term—13 more days.

“The shocking events of the last 24 hours clearly demonstrate that President Donald Trump intends to use his remaining time in office to undermine the peaceful and lawful transition of power to his elected successor, Joe Biden,” Zuckerberg said in a Facebook post.

“His decision to use his platform to condone rather than condemn the actions of his supporters at the Capitol building has rightly disturbed people in the US and around the world. We removed these statements yesterday because we judged that their effect -- and likely their intent -- would be to provoke further violence.”

“We believe the risks of allowing the President to continue to use our service during this period are simply too great. Therefore, we are extending the block we have placed on his Facebook and Instagram accounts indefinitely and for at least the next two weeks until the peaceful transition of power is complete,” he wrote.

Facebook and Twitter both restricted Trump’s use of their services after, in the aftermath of the incident in the Capitol, Trump released a video message to the American people where he refused to condemn to violence, asking the mobs to go home peacefully but adding “we love you” to them at the end.

Twitter said it would lock Trump's account for 12 hours, extending the ban if he did not delete tweets rejecting the election result and appearing to incite violence (Trump went on to delete the tweets).

Few messages have come directly from the President besides his video and concession. Even on Parler, the right-wing social media platform promising a "Free speech platform", Trump has not directly communicated with his base.

Not just social media platforms, but even business partners have pulled the plug. The Shopify e-commerce facilitator has taken TrumpStore.com offline as well as other sites linked to the Trump Organization and Trump campaign, for violating the company’s policy prohibiting retailers on the platform from promoting or supporting organisations or people that promote violence. “As a result, we have terminated stores affiliated with President Trump,” Shopify said.

The fallout goes beyond distancing from Trump. The Republican Party—whose own members were threatened when Trump supporters stormed the Capitol building, with pipe bombs found at both the Democratic and Republican National Committee headquarters—has also shown unprecedented signs of breaking with Trump.

Republican Adam Kinzinger was the first GOP lawmaker to call for Trump to be removed via the 25th Amendment, which allows the Vice President to discharge the President of his duties if he is deemed unfit for office.

“It’s with a heavy heart I am calling for the sake of our Democracy that the 25th Amendment be invoked,” Kinzinger said in a video message.

It’s with a heavy heart I am calling for the sake of our Democracy that the 25th Amendment be invoked. My statement: pic.twitter.com/yVyQrYcjuD

The 25th Amendment, adopted more than 50 years ago in the wake of President Kennedy’s assassination, provides a mechanism for the succession of the president for his or her replacement in the event he or she proves unfit to serve.     Under the amendment, the vice president and a majority of either the Cabinet or some other body designated by Congress may remove the president from office.

Pence had only recently broken with Trump, refusing the President’s request to overturn the results of the election. Despite the interruption caused by the rioters, Congress later reconvened and voted—306 to 232—to certify Joe Biden as President-Elect.

Following Congress's move—the final step in deciding the election—Trump was forced to issue a statement committing to an "orderly transition" of power on January 20. Trump added, nevertheless, that he disagreed with the outcome of the election and that this was only the beginning of his fight to "make America great again".

The concerns over Trump’s fitness to serve the remainder of his term stems in part from his declining mental state: Multiple reports from inside the White House have claimed Trump refuses to listen to advisors contradicting his view that he won the election.

Senate Democratic Leader Chuck Schumer has issued a statement calling for Trump’s removal from office via the Vice President invoking the 25th amendment.

“What happened at the US Capitol yesterday was an insurrection against the United States, incited by the president. This president should not hold office one day longer,” Schumer said.

Should the Vice-President and Cabinet fail to do so, Schumer called for Congress to reconvene and impeach Trump. With both the House and the Senate now in Democratic control, an impeachment, this time around, could be successful. However, time constraints make an impeachment unlikely, if not impossible.