Amid crucial Brexit talks with EU, Raab flies to India for four-day visit 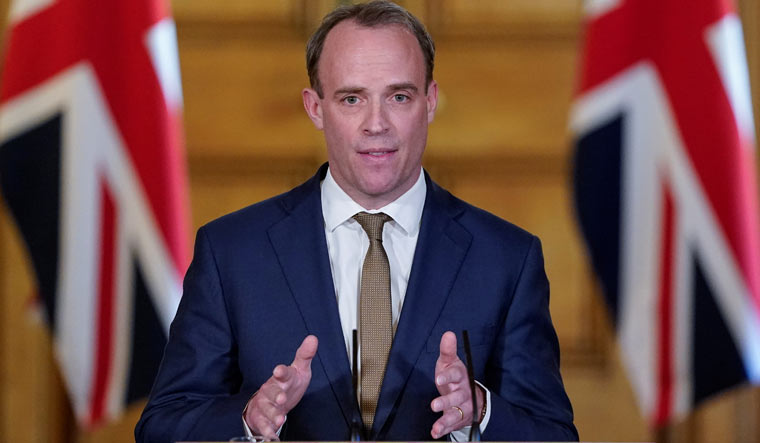 It is all about wooing India. As “eleventh hour’’ negotiations for a post-Brexit deal continue with the European Union, British foreign secretary Dominic Raab flies to India for a four-day tour to bolster older ties.

“Mr Raab’s visit will pave the way for further strengthening of the partnership across trade, defence, climate, migration and mobility, education and health sectors in the post-Covid, post-Brexit context,’’ read a statement issued by the ministry of external affairs.

Raab will hold meetings with External Affairs Minister S. Jaishankar on Tuesday. He will also  meet the Minister of Environment, Forests and Climate Change, Prakash Javadekar and the Minister of Education, Ramesh Pokhriyal. On December 17, Raab will fly to Bengaluru to meet Chief Minister B.S. Yediyurappa.

Prime Minister Narendra Modi is learnt to have extended an invitation to Prime Minister Boris Johnson to be the the chief guest for Republic Day. However, there is no official confirmation of this as yet. The visit also comes as the farmers' protests in India have found echo among the Indian diaspora.

Just last week, the issue was raised in the House of Commons by Opposition Labour MP Tanmanjeet Singh Dhesi. “Many constituents, especially those emanating from Punjab and other parts of India, and I were horrified to see footage of water cannons, teargas and brute force being used against peacefully protesting farmers,” he was quoted as saying. Turning to Johnson, Dhesi asked, "So, will the prime minister convey to the Indian prime minister our heartfelt anxieties, our hopes for a speedy resolution to the current deadlock, and does he agree that everyone has a fundamental right to peaceful protest?”

Dhesi has taken to Twitter to support the protests and has been lobbying MPs on the subject. He has written a  letter to Raab signed by 36 MPs asking for intervention and describing the new laws as a “death warrant”.

While Dhesi’s question underlined the level of international attention that the protests were garnering—beyond just Canada—Johnson’s response left the Foreign Office red in the face. Johnson, appearing to be confused, said, "Our view is that of course we have serious concerns about what is happening between India and Pakistan but these are pre-eminently matters for those two governments to settle.”

The Foreign Office swung into action claiming Johnson misheard the question and that the protests were being watched closely. However, it is unlikely that Johnson is going to get dragged into the issue. Especially, as India has claimed that the protests have Khalistani links. On Friday, protests were organised outside the Indian High Commission in London.  Organised by Sikhs for Justice (SFJ), which India believes have Khalistani links, India had sought to raise matters with the UK authorities.

For the UK, closer cooperation with India will be essential post-Brexit. There will be a push for a free trade agreement with India. Johnson, in a bid to calm feathers ruffled by Theresa May, allowed a two-year post-study visa for international students, making it easier for Indian students to stay on after their studies.

The two countries are also collaborating closely on climate change. For his address on Saturday, Johnson certainly did his homework when he said, "We're going ahead with a massive solar programme, even though we can't hope to emulate the incredible things being done by India, Australia or Morocco for instance," while speaking at the Climate Ambition Summit to mark the fifth anniversary of the Paris climate agreement.