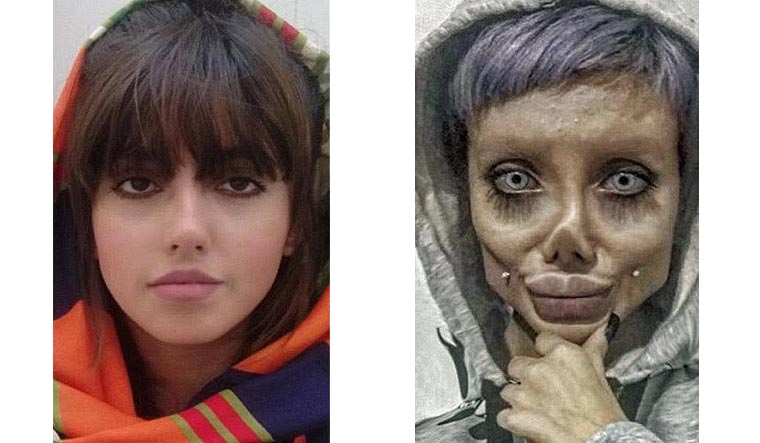 The Iranian teenage Instagram star, known to dress up like a 'Zombie Angelina Jolie' has been jailed for 10 years. 19-year-old Sahar Tabar was arrested in October 2019 for her social media activities.
Tabar, whose real name if Fatemeh Khishvand is from Tehran. She gained a large number of followers on Instagram after she posted images of herself looking like Hollywood star Angelina Jolie's zombie version.
Tabar's stunt was viewed as a joke by many. Iranian journalist and activist Masih Alinejad, on Twitter, called on Hollywood actor Angelina Jolie to help Tabar. “I call on Angelina Jolie to help an Iranian 19-year-old girl who received 10 years prison sentence for using makeup & Photoshop to turn herself into Angelina. The Islamic Republic has a history of tormenting women. We need to be united against this gender apartheid,” she wrote.
“Her mother cries every day to get her innocent daughter freed,” Alinejad wrote.

Tabar, who was convicted of corrupting young people, had revealed her original appearance for the first time in July 2019. “This is Photoshop and makeup. Every time I publish a photo, I paint my face in an increasingly funny way. It is a way of expressing yourself, a kind of art. My fans know that this is not my real face,” she had said. Tabar also faces charges of blasphemy, inciting violence, gaining income through inappropriate means.
And while the Instagram star admitted to having had some procedures like a nose job and lip fillers, she insisted that most of her images were a result of makeup and editing.