‘Transracial adoption is fraught with trauma,’ a Twitter user wrote 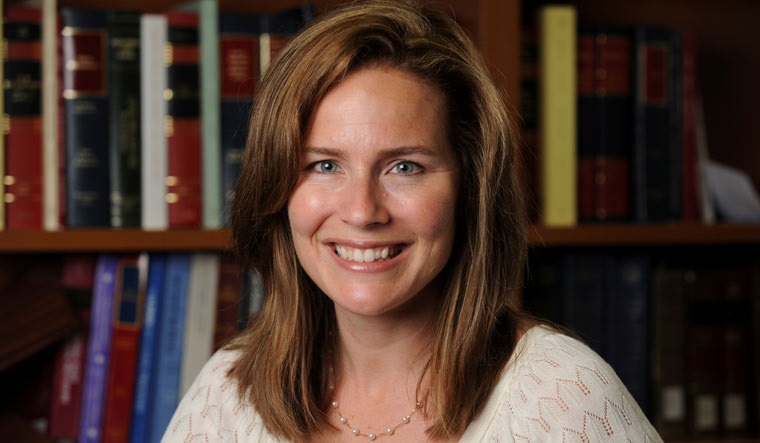 American media, on Friday, reported that President Donald Trump is likely to name Amy Coney Barrett to replace Justice Ruth Bader Ginsburg. 48-year-old Barrett has been attacked by leftists for adopting children from Haiti. One user, Dana Houle, an adoptive parent who supports Democrats wrote on Twitter, "Does the press even investigate details of Barrett's adoptions from Haiti? Some adoptions from Haiti were legit. Many were sketchy as hell. And if press learned they were unethical & maybe illegal adoptions, would they report it? Or not bc it involves her children."

Barrett has strong support from Republican Senators. She is the favourite choice of conservative Christians, who hope to overturn the landmark decision in Roe v. Wade, establishing a woman's right to an abortion. Trump is going ahead with the nomination despite strong opposition from the Democrats. Former vice president Joe Biden, the Democratic presidential nominee.

Though House later deleted the tweet, she wrote, "I shouldn't have tweeted this...Not because it is smearing someone as engaging in child sex trafficking, but because I didn't realise all the rubes out there would take offence to it." The tweet was deleted after Republican Senators Tom Cotton and Josh Hawley lashed out at her. Another adoptive parent, John Lee Brother wrote, "As an adoptee, I need to know more about the circumstances of how Amy Coney Barrett came to adopt her children and the treatment of them since. Transracial adoption is fraught with trauma and potential for harm, and everything I see here is deeply concerning."

Democrats have also used her faith—Roman Catholicism against her as they believe she may not be able to keep her faith and judicial views separate from one another. Joe Lieberman said Friday that it would be a mistake for Democrats to focus too hard on Barrett's Catholicism during potential confirmation hearings. He was reported in a DailyMail report as saying, “You can disagree with somebody based on whether they're pro-life or pro-choice, but when you start to say that you're against them because their religion, in this case, their Roman Catholicism, determines their point of view, you're doing something really abhorrent that I think is bigoted, is un-American, and incidentally, is unconstitutional.”

California Senator Dianne Feinstein, a Democrat, questioned whether Barrett would be able to keep her faith separate from her legal opinions. “The conclusion one draws is that the dogma lives loudly within you,” she said.

On the issue of adoption, American journalist Meghan McCain tweeted, “President Bush politicised adoption and my little sister— my family and America never forgot it (I never forgave). It is historically noted as a dark mark on American political history. Do not do to Amy Coney Barrett’s family what was done to mine, democrats. It won’t end well.”

Barrett hasn’t commented on any of the vicious trolls around her adoption, nor has President Trump, so far.