Extreme events are now commonplace and growing across the globe 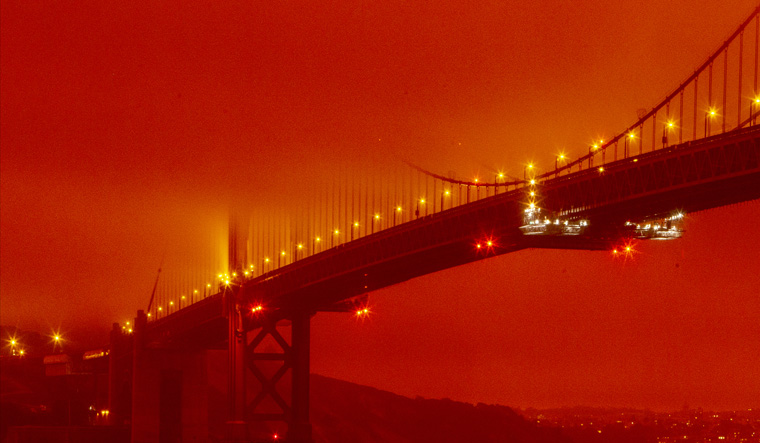 A smoky, orange hue caused by the ongoing wildfires in California | AP

The United States West Coast, with California as a central node, is reeling under unprecedented wildfires, turning skies into "apocalyptic" shades of red and orange. Former US president Barack Obama shared some images, tweeting: "The fires across the West Coast are just the latest examples of the very real ways our changing climate is changing our communities. Protecting our planet is on the ballot. Vote like your life depends on it—because it does." The frequency of extreme wildfire weather has doubled in California over the past four decades.

The fires across the West Coast are just the latest examples of the very real ways our changing climate is changing our communities. Protecting our planet is on the ballot. Vote like your life depends on it—because it does. pic.twitter.com/gKGegXWxQu

Wildfires are currently raging unchecked through California. More than 14,000 firefighters are battling fires. Two of the three largest blazes in state history are burning in the San Francisco Bay Area, though they are largely contained after burning three weeks. California has already set a record with nearly 2.3 million acres (930,800 hectares) burned this year—surpassing a record set just two years ago—and the worst part of the wildfire season is only beginning.

To top it all off, two tropical storms simultaneously formed in the Atlantic Ocean—far earlier than the usual time—taking shape off the coast of West Africa. Rene and Paulette set records for earliest 16th and 17th named storms, as the US National Hurricane Center issued a tropical storm warning for the Cabo Verde Islands. Rene is the Atlantic's earliest 17th named storm on record, breaking the previous record of Rita, which formed September 18, 2005. Tropical Storm Paulette formed in the central Atlantic, far from land.

Such extreme events are now commonplace and growing across the globe. 2020 was the year when Arctic famously became "feverish" and "on fire". In June, the thermometer hit a record of 38 degrees Celsius (100.4 degrees Fahrenheit) in the Russian Arctic town of Verkhoyansk, a temperature that would be a fever for a person—but this is in Siberia, known for being frozen. Much of Siberia had high temperatures this year that were beyond unseasonably warm. From January through May, the average temperature in north-central Siberia has been about 8 degrees Celsius (14 degrees Fahrenheit) above average.

The increasing temperatures in Siberia have been linked to prolonged wildfires that grow more severe every year and the thawing of the permafrost—a huge problem because buildings and pipelines are built on them. Thawing permafrost also releases more heat-trapping gas and dries out the soil, which increases wildfires. Last August, more than 4 million hectares of forests in Siberia were on fire, according to a report by Greenpeace. This year, the fires have already started raging much earlier than the usual start in July. Persistently warm weather, especially if coupled with wildfires, causes permafrost to thaw faster, which in turn exacerbates global warming by releasing large amounts of methane, a potent greenhouse gas that is 28 times stronger than carbon dioxide.

What does the future portend?

The world is getting closer to passing a temperature limit set by global leaders five years ago and may exceed it in the next decade or so, according to a new United Nations report. In the next five years, the world has nearly a one-in-a-four chance of experiencing a year that is hot enough to put the global temperature at 2.7 degrees (1.5 degrees Celsius) above pre-industrial times, according to a new science update released Wednesday by the UN, World Meteorological Organisation and other global science groups.

That is 1.5 degrees celsius is the more stringent of two limits set in 2015 by world leaders in the Paris climate change agreement. A 2018 UN science report said a world hotter than that still survives, but chances of dangerous problems increase tremendously.

The warming that has already occurred has "increased the odds of extreme events that are unprecedented in our historical experience", Stanford University climate scientist Noah Diffenbaugh told San Francisco Chronicle. For example, he said, historical global warming has increased the odds of record-setting hot extremes at more than 80 per cent of the globe, and has doubled or even tripled the odds over the region of California and the western US that has experienced record-setting heat in recent weeks.

The world already has warmed nearly 2 degrees (1.1 degrees Celsius) since the late 1800s, and the last five years are hotter than the previous five years, the report said. The speed-up could be temporary, or it might not be. "There is both man-made warming and natural warming from a strong El Nino weather pattern in the past five years," said World Meteorological Organisation Secretary-General Petteri Taalas. "The probability of 1.5 degrees (celsius) is growing year by year," Taalas told The Associated Press. "It is very likely to happen in the next decade if we don't change our behavior."

The report spotlights unprecedented wildfires in the Amazon, the Arctic and Australia. California is fighting record wildfires as the report was issued. Drought and heat waves substantially increased the risk of wildfires, the report said. The three largest economic losses on record from wildfires have all occurred in the last four years.

So far, this year is the second hottest on record and has a 37 per cent chance of surpassing the global record set in 2016, according to the US National Oceanic and Atmospheric Administration.

-Inputs from PTI via AP