"We want a new election, a new government and a new life" 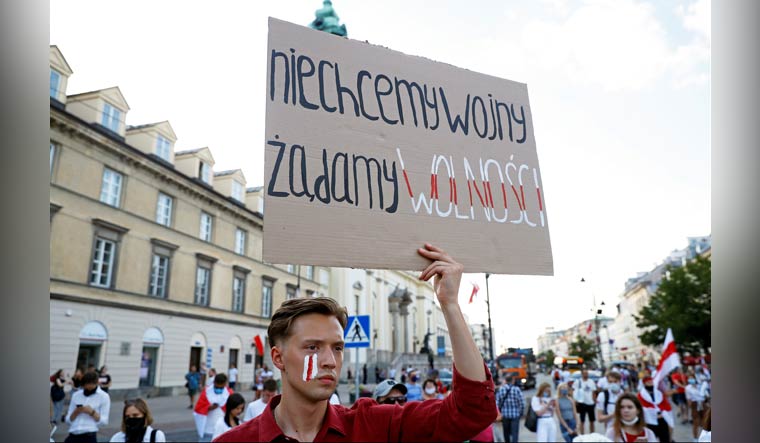 A man holds a placard reading "We don't want war, we demand freedom" during a march in solidarity with the Belarusian people after results of presidential election, in Warsaw, Poland, August 14, 2020 | REUTERS

Tens of thousands of people flooded the heart of the Belarus capital of Minsk on Friday in a show of anger over a brutal police crackdown this week on peaceful protesters that followed a disputed election, as authorities sought to ease rising public fury by freeing at least 2,000 who were jailed after earlier demonstrations.

Factory workers marched across the city shouting Go away! in a call for authoritarian President Alexander Lukashenko to resign after 26 years of iron-fisted rule that was extended in an election Sunday that protesters denounced as rigged.

About a dozen soldiers guarding the nearby government headquarters lowered their riot shields in what the demonstrators saw as a sign of solidarity, and women rushed to embrace and kiss the guards.

Earlier, police didn't interfere as the protesters marched across the city, reflecting Lukashenko's apparent attempt to assuage the opposition by stepping back from the violent police crackdowns seen across the country earlier this week.

The release by the Interior Ministry of about 2,000 of the nearly 7,000 people detained was seen as another move to defuse popular outrage. It said more would be freed.

Many who were released spoke of brutal beatings and other abuse by police, and some showed bruises on their bodies. Some of them wept as they embraced waiting relatives.

Demonstrators have swarmed the streets ever since Sunday's election in which officials reported that Lukashenko won 80% of the vote to win a sixth term in office.

His main challenger, Sviatlana Tsikhanouskaya, who fled on Tuesday to neighboring Lithuania, posted a new video in which she disputed the results of the vote and demanded that the government start a dialogue with demonstrators.

European Union foreign ministers are due to meet to discuss possible sanctions against Belarus over the ferocious crackdown that left hundreds injured since Sunday as police have dispersed the largely peaceful demonstrations with stun grenades, tear gas, rubber bullets and severe beatings. At least one person has been killed.

Thousands of factory workers who previously formed the core of Lukashenko's base have joined the protests, denouncing the police crackdown and demanding a new election, raising the prospect of a nationwide strike.

Our entire shop voted against Lukashenko and then we suddenly learned that he won by a landslide, 42-year-old assembly worker Dmitry Glukhovsky said outside the Minsk Automobile Plant, or MAZ.

They not only have cheated us but also beaten us up, and no one is going to accept that.

He said that his assembly shop went on strike Friday to demand a new election. More than 1,000 workers could be seen in the factory's yard, shouting Down! in a call for Lukashenko to resign.

At the Minsk Tractor Plant, or MTZ, about 1,000 workers also rallied to demand Lukashenko's resignation and then marched toward the government headquarters. As they reached the center of the capital, the crowds grew and people stood applauding and motorists honked in support.

"We want a new election, a new government and a new life", said 44-year-old engineer Mikhail Marchuk as he marched along with other plant workers toward central Minsk. We will protest until we win.

Workers also rallied at many other major factories in an unprecedented challenge to Lukashenko, who has been in power since 1994 and earned the nickname of Europe's last dictator for his relentless suppression of dissent.

Clearly nervous, the Belarusian leader warned Friday that the strikes would deepen the damage inflicted by the coronavirus pandemic and could lead to Belarus losing its niche in global markets.