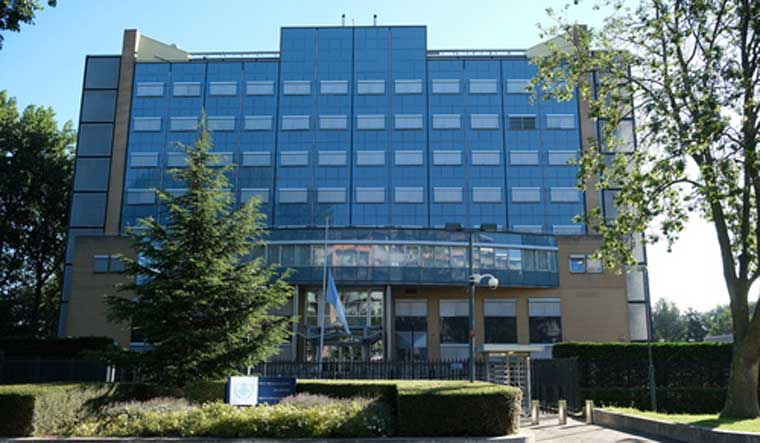 The flag flies at half staff outside the Special Tribunal for Lebanon, in Leidschendam, the Netherlands, Wednesday August 5, 2020 | AP

A UN-backed tribunal has postponed the delivery of judgments in the trial of four members of the militant group Hezbollah charged with involvement in the 2005 assassination of former Lebanese prime minister Rafik Hariri.

The move was a mark of respect to victims of the devastating explosion that rocked Beirut late Tuesday.

The verdicts were to have been read out in the Special Tribunal for Lebanon's courtroom in the Netherlands on Friday, but will now be delivered on Aug. 18.

In a statement, the tribunal says the decision to delay Friday's court hearing was made out of respect for the countless victims of the devastating explosion that shook Beirut on Aug. 4 and the three days of public mourning announced in Lebanon.

The court has expressed its solidarity with the Lebanese people in these difficult times.

Palestinians in the Gaza Strip are participating in a blood donation drive to try and help victims of the explosion in Beirut that has wounded thousands.

Dozens took part in a blood drive in the city of Khan Younis on Wednesday, which was sponsored by the Palestinian Red Crescent Society. Organizers said they will coordinate with the International Committee of the Red Cross to try to get the blood donations delivered to Lebanon.

I donated my blood in a moment of loyalty to the Lebanese people, said Khan Younis resident Abu Diab Ouida.

The Gaza Strip has been under a joint Israeli-Egyptian blockade since 2007, after the Islamist militant group Hamas took power from Palestinian rivals in an armed coup. It remains unclear whether the donated blood will be able to reach Lebanon.

The Hungarian government says it is donating 1 million euros ($1.2 million) for rescue, salvage and reconstruction efforts in Lebanon.

The donation to be made through the Hungary Helps program, which provides assistance mainly to charities of Christian churches and other religious organizations around the world, will be given to Lebanon's Maronite Church.

State Secretary Tristan Azbej said Wednesday that the good friend is known in trouble and the Hungarians are good friends of the Lebanese people.