NATO at a crossroads: How the world's most powerful military alliance is imploding

In Libya, Hong Kong and failure in reining in Turkey, the weakness is as clear as day 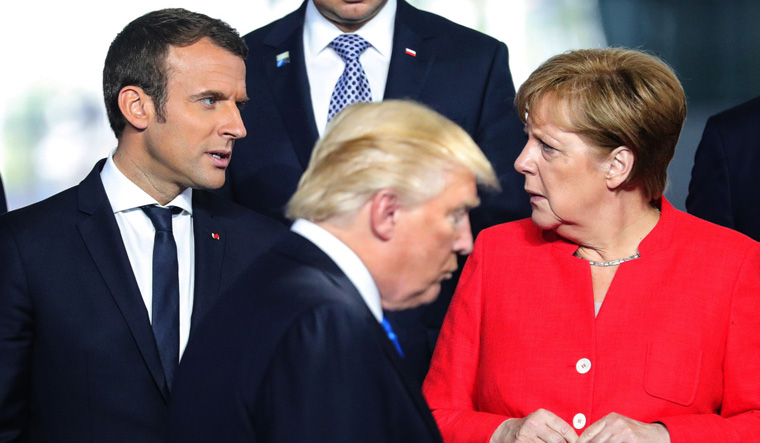 On November 7, 2019, French president Emmanuel Macron described the North Atlantic Treaty Organisation (NATO) as "brain dead", citing, in an interview with The Economist, the US decision to pull out security forces of northern Syria which led to a Turkish invasion. The remarks evoked widespread condemnation from the member nations, but Macron remained steadfast and unapologetic.

The NATO is the world's most powerful defence alliance, with member states like France, US, Britain, Germany and Turkey, set up in 1949, to counter communist expansion under Soviet Union. It originally had 12 members, now it has 30. Article 5 of NATO says that an attack against one of the member states will be deemed an attack against all of the others, and the alliance works on the principle of complete consensus between its members.

In the first week of June, Macron reiterated the remark, as a festering dispute between France and Turkey in the Mediterranean Sea came to a naval standoff. According to the Paris version of the story, Turkish warships assumed a hostile position and flashed their radar lights against French warship Courbet in the eastern Mediterranean. According to France, Courbet was on a NATO mission to investigate whether Turkish vessel Cirkin was smuggling arms to war-torn Libya (where there is a UN arms embargo); They said Cirkin had turned off its transponder, failed to identify itself and did not give its final destination, news agency Reuters reported.

Turkish Foreign Minister Mevlut Cavusoglu accused France of lying. "We have proven this with reports and documents and gave them to NATO," Cavusoglu said. "Our expectation from France at the moment is for it to apologise in a clear fashion, without ifs or buts, for not providing the correct information."

The incident is currently under NATO enquiry. Even so, a balking France has announced temporary withdrawal from the security-oriented naval missions of NATO.

The Mediterranean incident has shone a glaring searchlight on NATO's current struggle to keep order among its ranks, exposing weaknesses and limits when its allies are now increasingly on different sides of global military conflicts.

Libya is the best example of the quagmire that NATO finds itself in. The war-torn country, since 2015, has been divided into two governments: one in the east allied with rebel military commander Khalifa Haftar, and a UN-recognised, Islamist-tolerant Government of National Accord (GNA) based in Tripoli. Roughly speaking, the Tripoli-based government has the backing of Italy, Turkey and Qatar, while Haftar is supported by Russia, France, Egypt and the United Arab Emirates.

The UN Security Council has an arms and military equipment embargo on Libya since February 2011. However, France's Macron has accused Turkey of flouting the restrictions, ramping up its military presence in Libya, and bringing in jihadi fighters from Syria. "I think that it's a historic and criminal responsibility for a country that claims to be a member of NATO," Macron said. "We have the right to expect more from Turkey than from Russia, given that it is a member of NATO."

The US, under Donald Trump, had a confused policy in Libya. The US initially supported the formation of the GNA government in 2015, but soon changed tack, lauding "Field Marshall Haftar's significant role against terrorism and securing oil".

Fissures within the organisation

Turkey has consistently been at the centre of controversies in NATO. Tension between Ankara and the other NATO member nations were at the peak after Turkey invaded northern Syria in 2019, bombing Kurdish positions—the US had essentially greenlit the operation by withdrawing from the region.

Turkey under Erdogan defied NATO to purchase an S-400 missile defence system from Russia; the member nations had protested that this would compromise the alliance's defence security apparatus. Erdogan also vetoed a NATO defense proposal to include Poland and the Baltic nations in its fold, pushing the NATO to recognise Kurdish fighters as security threats.

Tensions have also been high between NATO allies and neighbours Greece and Turkey. Greece and Turkey are also at loggerheads over oil and gas exploration rights in the Mediterranean and over territorial issues in the Aegean Sea dividing the two countries. The two have come to the brink of war three times since the mid-1970s.

Despite concerns about its direction and close ties with rival Russia, Turkey can't be ejected from the military organisation. Legally, there is no mechanism, and decisions require the unanimous agreement of all member nations. In any case, NATO insists that Turkey is too strategically important to lose, and does not want to drive Ankara fully into the hands of Moscow.

UK, for instance, in the post-Brexit scenario, views Turkey as one of its trading lynchpins.

In the case of Turkey too, the US policy ambiguity is clear; Trump, with his emphasis on isolationism and 'America First', has expressed an unwillingness to look beyond the country's immediate interests.

In October 2019, Trump withdrew troops from nothern Syria, much to the horror of its allies, throwing to slaughter at the hands of the Turkish forces the Kurds who have supported the US in its fight against the Islamic State. Later, Trump threatened to "competely obliterate Turkey's economy" if it went off-limits in Syria.

In normal times, the United States by far the most powerful and influential of the allies could be expected to bring its partners into line. But, the last four years, with Trump at the helm in the US, have been extraordinary times for NATO. Trump has publicly berated European allies and Canada for not spending enough on defense budgets. He has pulled out of the Iran nuclear agreement, the Intermediate-Range Nuclear Forces Treaty and the Open Skies aerial surveillance pact, which the Europeans regard as important to their security.

With no firm US hand, divisions among the allies over how Libya should be handled, and a decision-making process that requires everyone to agree even on what they should talk about it's difficult to see when NATO might even debate the Libya embargo question in earnest.

The differences in NATO, and the iciness in relations between the US and EU, have all contributed to a lack of action as China implemented a new security law in Hong Kong.

From Tokyo to Brussels, political leaders have swiftly decried Beijing's move to impose a tough national security law on Hong Kong that cracks down on subversive activity and protest in the semi-autonomous territory. But the rhetoric has more bark than bite. For people in Hong Kong, the question is: Will international anger and statements of concern make any difference? Individual countries have little leverage over Beijing on human rights, experts say. A joint effort could make a difference, but coordinated action seems unlikely given strained ties between the Trump administration and many of Washington's traditional European allies.

The US and EU are moving in different directions in many areas. It is perhaps to China's advantage that that should be so, said Rod Wye, an Asia-Pacific associate fellow at the Chatham House think tank in London, speaking to news agency AP. "In particular, Europeans do not want to be drawn into the U.S.-China trade war," he said. "Expressions of concern are certainly not going to change the Chinese intention one little bit."

A joint US-European report released this week on relations with China described a deep sense of frustration, fatigue, and futility. The stronger China gets, the less willing it has become to even engage perfunctorily with the West on the issue. The report from the Asia Society, the Bertelsmann Stiftung and George Washington University said that concern about human rights abuses in China remains deep, from the new security law in Hong Kong, which went into effect Tuesday night, to the repression of Muslim minorities in the Xinjiang region in western China.

China routinely dismisses all such criticism as interference in its domestic affairs. One of the crimes in the Hong Kong security law explicitly outlaws receiving funding or support from overseas to disrupt lawmaking in Hong Kong or impose sanctions on the city. This issue is purely China's internal affairs, and no foreign country has the right to interfere, Chinese Foreign Ministry spokesperson Zhao Lijian said.

Steve Tsang, who directs the China Institute at London's School of Oriental and African Studies, told AP that if the EU were to join forces on the issue with the Five Eyes alliance—the US, Britain, Canada, Australia and New Zealand—the group would have real economic clout. The EU is China's largest trading partner.

But, he said it was far-fetched for either Britain's Boris Johnson or Trump to work with the EU on the issue. "It is reasonable for Beijing to calculate that both the U.K. and U.S. are paper tigers," Tsang said. "[UK PM] Boris is focused on Brexit. He is happy to cooperate with anyone except for the EU."