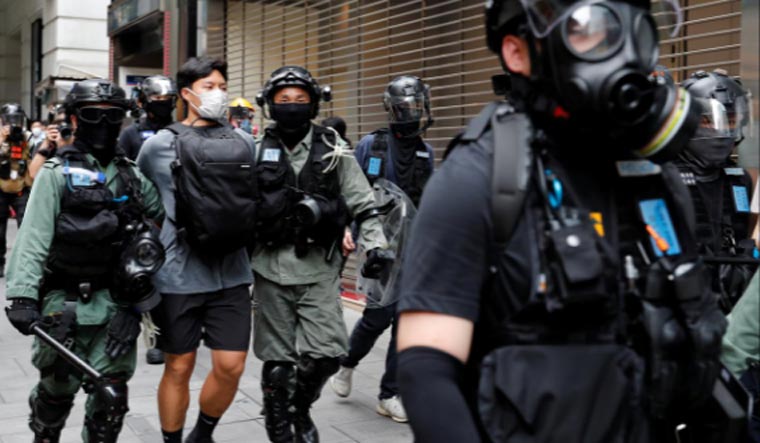 On June 30, China passed the national security law that Hong Kongers dreaded so much and on July 1, the first arrest was made in accordance with the law.

Hundreds of citizens who came out to protest passage of the law were met with the force of the riot police—the police fired pepper spray on the crowd and then dispersed them using water cannons. It is here that the police made their first arrest in accordance with the law—a man holding a black independence flag, and soon afterwards a woman with a sign reading “Hong Kong Independence”.

Critics had been warning that the law will strip the city of its autonomy and precious civil and social freedoms, and will cement Beijing's authoritarian rule over the territory. People convicted of such crimes under the law can face sentences of up to life in prison.

Ahead of the law being formally introduced on Monday, several political and social activists disbanded fearing that they could be targeted once the law was passed.

Several citizens deleted their social media posts; shopkeepers tore down posters that supported some anti-government protests. One protester said that they will now be using a virtual private network to protect himself online and would even consider leaving the city.

As protesters continued chanting and waving flags despite the stricter penalties, the police asked them to back down and unfurled a purple flag warning protesters of being in violation of the new law. As per a police source, the police commanders were told to arrest anyone seen waving or in possession of the independence flags.

In an AP report, Hong Kong’s Chief Executive Carrie Lam was quoted as saying, "This decision was necessary and timely to maintain Hong Kong's stability," following a flag-raising ceremony and the playing of China's national anthem.

Nearly a year ago when Hong Kong citizens were protesting the passage of an extradition bill, protesters had stormed the city's government headquarters, spray-painting messages in Cantonese and English on the walls of the legislative chamber demanding that the extradition bill be dropped.

Currently, protestors cannot vandalise government property to show their objection to the law, as, under the new rule, acts of vandalism against government facilities or public transit can be prosecuted as subversion or terrorism and while anyone taking part in activities deemed as secessionist and subject to prosecution.