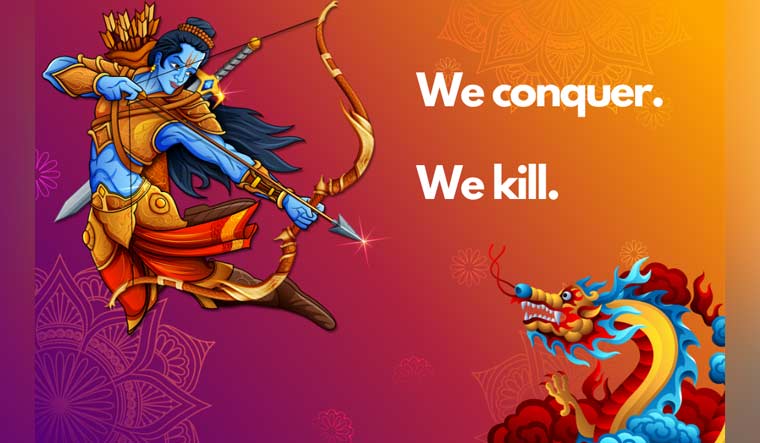 As the news grows steadily more grim along the Indian and Chinese border in Eastern Ladakh near the Line of Actual Control, where 20 Indian soldiers were killed in a skirmish with Chinese forces, triggering nationwide grieving, netizens from Taiwan and Hong Kong have come out in India’s support.

An illustration went viral on Hong Kong social media platform lihkg, which showed Rama aiming an arrow at a Chinese dragon beside the words, “We conquer, we kill”. The image was picked up by Taiwan News, which made it their ‘Photo of the day’. Following this, it went viral on Indian Twitter, making #Taiwan one of the top-trending hashtags briefly.

“Thank you, Taiwan” read a tweet by one Twitter user, which was then retweeted thousands of times.

A post with the image was one of the top threads on lihkg, with many users sharing pro-India images, and several posts on the platform in support of India. Some pointed out India’s historic role as part of the military police in Hong Kong during the British-ruled period of the island, as well as how the Indian Army defended Hong Kong against the Japanese during the Battle of Hong Kong in 1941.

Netizens from Taiwan and Hong Kong alike took to social media to express their support for India in the clash with China. Curiously, many posts replying to the image spoke of a 'Milk Tea Alliance'. The Milk Tea Alliance is an informal term used on social media to reflect solidarity among countries in Asia that have a custom of adding milk to their tea—the notable exception in the region being China—where black tea is more popular. With India, Hong Kong and Taiwan each known for their milk tea, the concept of the milk tea alliance also reflects a larger anti-China sentiment in such countries.

If this tiny island can speak for us, Why cnt a country of 1.3billion, worlds 4th strongest army, 3rd largest economy, speak up for them! Time to junk one China policy!

The internet support comes as tensions between Taiwan and China have been growing, with Chinese warplanes flying inside Taiwanese airspace for the 4th time in two weeks on Wednesday. The war of words between Taiwan and China has intensified of late, with Taiwanese President Tsai Ing-wen's assertion early in 2020 that Taiwan was an independent country and that Beijing must face this reality. Following the COVID-19 pandemic, Taiwan's exclusion from the WHO also sparked calls for WHO reform and greater accountability of the role of China in spreading the virus across the world.

I am a Hongkonger. In WW2, brave soldiers of British Indian Army sacrificed themselves trying to save Hong Kong from hands of evil fascists. Thank you, Indians!#HKStandsWithIndia #IndiaChinaFaceoff

Relations between India and Taiwan have been warming. Several Indians reportedly participated in a motor rally in Taipei on June 13 to thank the country for its successful contamination of the coronavirus. In May, two BJP MPs virtually attended the swearing-in of Taiwan's re-elected president Tsai Ing-wen. That month, Taiwan also donated one million masks to India to help in the national effort against the coronavirus.

Hong Kong too has seen its issues with China flare-up of late, as protests that raged through 2019 gradually resumed after a brief lull during the peak of the coronavirus pandemic in the city. A new bill by Chinese lawmakers that makes it illegal to insult the Chinese national anthem had sparked a new wave of protests, as had a controversial new national security bill.

While 2019’s protests were initially sparked over a bill that would allow for Hong Kongers to be extradited to China to face much-harsher prosecution in certain instances, they later snowballed into a larger pro-democracy movement, in response to accusations of police brutality against the Hong Kong police.

While the extradition bill was eventually shelved, the new national security bill could end up having the same effect, as a Hong Kong lawmaker recently pointed out that it too could be used to extradite Hong Kongers to China to face punishment.