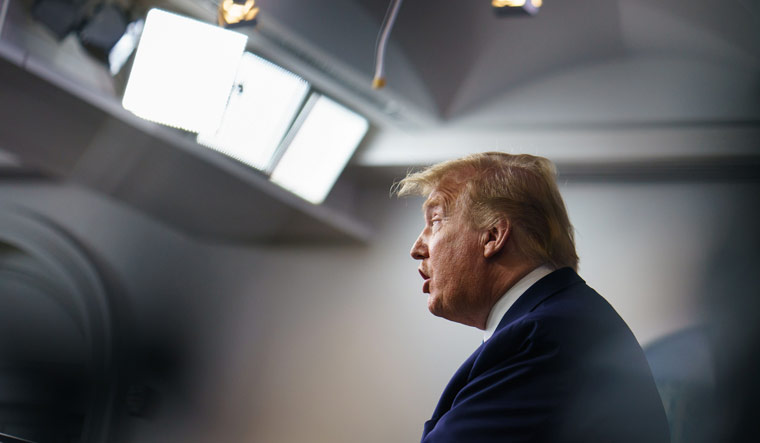 US President Donald Trump's day of reckoning is less than five months away. And, amid a virus pandemic and a racial injustice, his campaign team and top political advisors feel Trump needs to add more hopeful, optimistic and unifying messages to balance his harsh law-and-order rhetoric.

Trump is confronted with a vastly different political reality than he once envisioned. As per a Guardian report, based on an average of 12 polls taken since 25 May, the day George Floyd was killed, his approval ratings stands at 43 per cent, with 54 per cent disapproving.

West Wing advisers and campaign aides have grown increasingly concerned about his reelection chances as they've watched Trump's standing take a pummeling first on his handling of the coronavirus pandemic and now during a nationwide wave of protests against racial injustice. Trump currently is at a low point in his presidency and election campaign. Especially, in light of social media posts like, “When the looting strays, the shooting starts,” which he posted after it was reported that some protesters who were gathered in solidarty against Georgfe Floyd's death were looting stores in certain cities.

On May 28, after Trump tweeted that on-mail ballots were unreliable, Twitter CEO Jack Dorsey flagged it with a fact-check warning. On Friday, Twitter also pulled down a campaign video by Trump's team citing that it received copyright complaints regading the same. Thes incidents seem to have impacted his popularity negatively.

Trump aides feel that the renewed national conversation about racial injustice and the president's big law and order push have animated parts of the Democratic base black and younger voters whose lagging enthusiasm for Hillary Clinton in 2016 cleared the way for Trump's narrow victory.

Trump campaign communications director Tim Murtaugh says that as per their internal data, the president remains strong against Joe Biden. But as per sources, Trump has complained to advisers about the perception that he is lsing to Biden and called upon aides to strengthen his image.

And to this effort, the campaign team moved two veteran political aides into senior leadership roles. And on Friday, the campaign brought on board former communications chief Jason Miller as a senior adviser.

Trump's campaign advisers seem to agree on the need to build some godwill among the African-American community. Casting Biden in a negtaitve light wa the campaign team's original plan. But this went out of the window when the coronavirus pandemic hit American shores. And now, the strategy of playing up an economic win post the pandemic too, seems to be slipping away. Now, discussions to play up the negative side og Biden seem to be renewed.

In the meanwhile, Trump demanded that the campaign prepare to schedule rallies as soon as possible during the summer, aides have cautioned that filling an arena could potentially create risk of negative press if the virus were found to have spread at a campaign event.