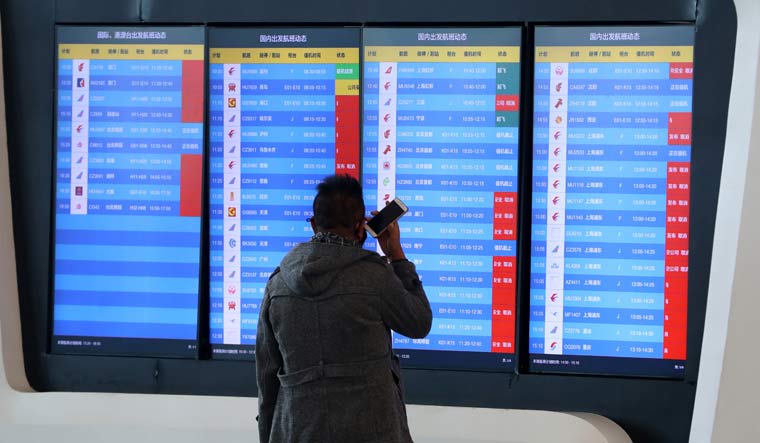 A man stands in front of a screen showing that multiple departure flights have been cancelled after the city was locked down following the outbreak of a new coronavirus, at an airport in Wuhan, Hubei province, China January 23, 2020 | cnsphoto via REUTERS

India on Sunday said it is examining "all options" in consultations with China to provide relief to over 250 stuck Indians, mostly students, in Wuhan, the epicentre of the fast-spreading coronavirus.

The death toll in the deadly new coronavirus in China rose to 56 on Sunday with confirmed cases of viral affliction reaching 2,008, including 23 from aborad.

The pneumonia outbreak was first reported in Wuhan City, central China's Hubei Province, in December 2019. The city of 11 million has been in quarantine since Thursday—with nobody allowed to leave as the government tries to contain its spread.

Apart from Wuhan, 12 other cities have been completely sealed by the Chinese authorities to stop the virus from spreading.

"We are also closely coordinating with Chinese authorities. As of now, we understand that no Indian citizens have been affected by the outbreak and that food and water supplies are available to them," Kumar tweeted.

India on Sunday opened the third hotline in view of "large number" of phone calls from the Indians who are mostly students, the Indian Embassy in Beijing said.

"In view of the large number of calls received in the two hotline numbers set up by @EOIBeijing in connection with the outbreak of coronavirus infection, @EOIBeijing has decided to open a third hotline number +8618610952903," the Embassy said in a tweet.

About 700 Indian students are believed to have been enrolled into several universities in the city and surrounding areas.

The Embassy has also said it is examining all options and holding consultations with China to provide relief to the Indians holed up in Wuhan.

"Over the last two days our hotlines have fielded nearly 600 calls to respond to concerns regarding this difficult situation. GoI and @EOIBeijing are also examining all options, including through consultations with the Chinese authorities, to provide relief to our affected citizens," another tweet by the Embassy said.

The reference to all options was seen as a pointer to explore the option to evacuate the stranded Indians.

Experts have attributed the outbreak to a new strain of coronavirus that has since spread across China and abroad.

Wuhan along 12 other cities have been completely sealed by the Chinese authorities to stop the virus from spreading.

While the majority of the Indian students, mostly medical students reported to have left a few weeks ago to avail the Chinese New Year holidays, over 250 to 300 are still reportedly stayed put in the city causing concerns to them and their parents back home about their safety.

A number of Indian PHD students also studied in different universities in Wuhan and the surrounding areas.

Some students managed to leave before the city just before it was sealed off on January 23.

Meanwhile, a Chinese health official has said home quarantine is enough for the returning Indian students from Wuhan if they have not shown any symptoms but should be kept isolation in a hospital if they showed any signs of coronavirus.

"We have been advocating everyone home quarantine is enough if you do not have any symptoms, do well basic hygiene measures such as so go out wearing a mask, and reduce any party activity, drink plenty of water, and wash hands," Gao Fu, Director General of China's Centre for Disease Control and Prevention, told media here.

Asked about what would be the advice China would give to returning Indian students from Wuhan, he said: "Of course, if students returned to India found themselves to have obvious symptoms of the coronavirus, we should encourage them to go to the hospital, separate them from others swiftly."

"It's the most basic thing you can do to protect against infectious disease, no matter what it is," he said.

In a rare move, the Indian Embassy here on Sunday cancelled the Republic Day ceremony, owing to the rising concern of the virus which has spread to all provinces except Tibet.

China reported having permitted the US to evacuate its diplomats and citizens from Wuhan.

US has a consulate in Wuhan. Roughly 1,000 American citizens are thought to be in Wuhan, a report in state-run China Daily said.

As the US plans to evacuate its citizens from Wuhan, Chinese Foreign Ministry said:  "Following international customary practices, China makes arrangements that are consistent with our epidemic control measures and provides necessary assistance and convenience.

Reports say the US has already shut its consulate in Wuhan and airlift the diplomats and some of the stranded Americans to San Francisco where they would be kept under observation.

Global Times reported that France and South Korea plans to airlift their citizens stranded in Wuhan.