56 have died so far, as China races to contain the spread of the virus 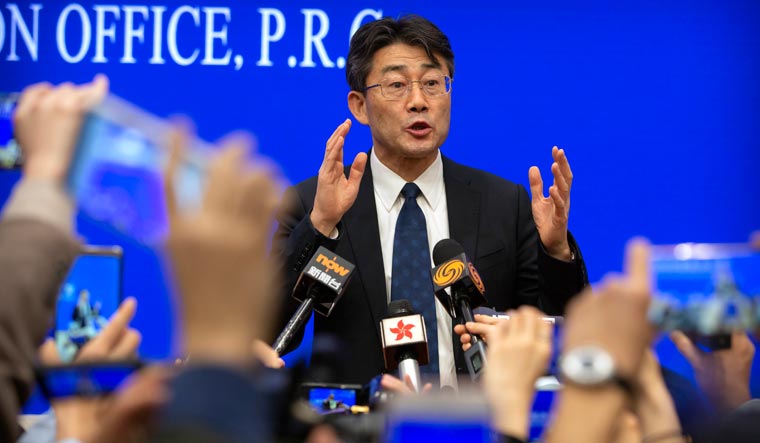 Gao Fu, the head of the Chinese Center for Disease Control and Prevention (CDC) | AP

China on Sunday announced that 1,975 confirmed cases of pneumonia caused by the coronavirus had been reported in the country by Saturday. With 324 people in critical condition, there have been 56 deaths due to the virus so far, which originated from Wuhan.

The country’s National Health Commission minister Ma Xiaowei announced the number at a press briefing, saying that while the understanding of the coronavirus was limited, its ability to spread was getting stronger.

He added that the coronavirus can infect people even during its incubation period—a factor that was not present in the case of the Severe Acute Respiratory Syndrome (SARS) outbreak in 2002-03.

However, Gao Fu, the head of China’s Centre for Disease Control and Prevention,  said that the disease is "not as powerful as SARS.”

Similarly, the lead doctor treating two patients from Wuhan in Paris, Dr Yazdan Yazdanpaneh, said that the disease seems less severe than SARS, as reported by the Candian news outlet Global News. Dr Yazdanpaneh highlighted how the fatality rate of the new coronavirus was less than that of SARS.

In addition, former FDA commissioner Scott Gottlieb told CNBC on Friday that the coronavirus appears less severe than SARS, though it was more contagious.

A simulation of a similar type of outbreak, conducted in October 2019 by a researcher with John Hopkins University, had found that up to 65 million people could be killed by it over the course of 18 months. The researcher, Eric Toner, had staged a simulation of a fictional virus called CAPS, which, in their model, spread across the world in the span of six months.

The city of Wuhan, the source of the outbreak and home to the most cases for now, is fighting hard to contain its spread. On January 23, authorities began work on constructing a specialised 1,000-bed hospital, with plans to finish building it within just a week, using prefabricated buildings.

Such is the pace of work to contain the virus, that reports have emerged of hospital staff wearing adult diapers as they struggle to treat the growing numbers of patients turning up with symptoms of the coronavirus. According to a report by the Washington Post, hospital staff in Wuhan have taken to wearing the diapers so they do not accidentally tear their hazmat suits while removing them to go to the bathroom. A shortage of such suits has raised fears that the one they have is the only one they will get.

The coronavirus has now been reported in ten countries, including China. These are: Australia, China, France, Japan, Malaysia, Singapore, Nepal, South Korea, Taiwan, Thailand, Vietnam, and the United States.