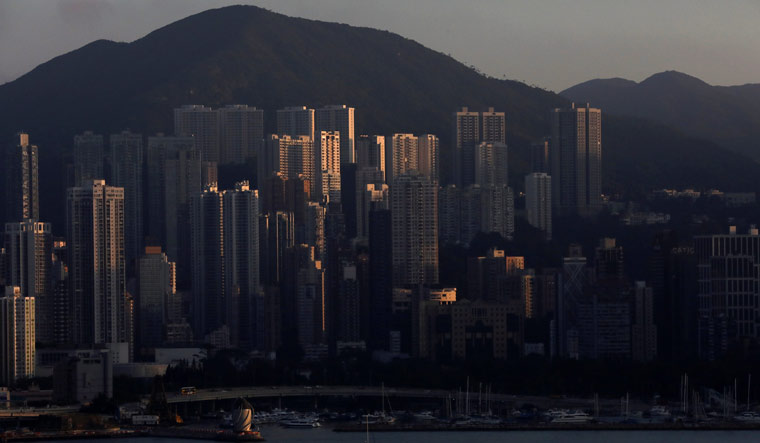 Traffic flowed through the Cross Harbour Tunnel for the first time in over two weeks on Wednesday.

The tunnel is one of the city’s three main links to the Kowloon peninsula and is among the busiest roads in the world. The regular flow of traffic along the tunnel, combined with a lull in protests that followed the weekend’s municipal elections, adds to an uneasy calm over a city that has seen continuous strife for the last six months.

The CHT was closed after a spate in violence saw protesters take over the nearby Polytechnic University and block the tunnel with debris. A siege ensued that lasted over a week as over one thousand protesters struggled to live off whatever food and rations they had left, even as the police waited outside the campus to detain anyone who stepped out. Many tried to escape via the sewers, with some even rappelling off the campus walls.

When the university staff checked the campus on Wednesday, they found no protesters remaining. Of the nearly 1,100 who were detained by police, only 40 were students according to the university’s chairman Kam Tai-fai. The Hong Kong police are set to search the premises on Thursday.

Of these, only the last has been formally implemented. 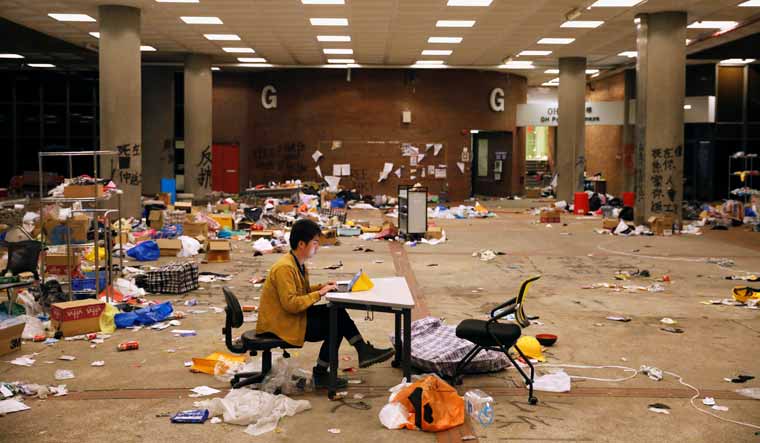 A journalist works on his laptop amid items left behind by protestors in Hong Kong Polytechnic University (PolyU) in Hong Kong, China, November 26, 2019 | Reuters

In addition to the demands comes the need to reconcile the fact of the recent district council elections, which saw pro-democracy candidates beat their opposition by a landslide; winning 90 per cent of the votes. The elections saw an unprecedented voter turnout for the city with its results seen as a rebuke to Hong Kong Chief Executive Carrie Lam’s administration.

Beijing responded to the poll results on Wednesday with an editorial in the government’s official China Daily calling them “skewed” and a “setback for Hong Kong’s democratic development.”

Lam—who has repeatedly fended off demands that she step down (despite offering to at one point)—said that she would model the city’s response to the protests on the UK’s response to the 2011 Tottenham riots, by setting up an independent review committee to look into the underlying cause of the social unrest.

While Lam has long hoped that the Independent Police Complaints Council (IPCC) would satisfy the protester’s demands, critics say it lacks the power to address the many complaints of police brutality that Hong Kongers say took place over the last six months.

Once Asia’s most-admired police force, the Hong Kong Police Force are now hated in the city, with human rights outfits like Amnesty International claiming that it used excessive and brutal force in dealing with the protests. The city's security minister, John Lee Ka-chu, said the force had received over 1,200 complaints so far for their handling of the protests.

The protests, too, have grown more violent as they stretched on, with November marking the most violent week the—as protesters hurled petrol bombs, were shot at close range, and even immolated a young man.

Speaking to THE WEEK, Victoria Hui, Associate Professor at the Department of Political Science at the University of Notre Dame, feels the stand-off will continue.

On being asked whether the Chinese government can grant the Hong Kong people the freedoms they have been demanding, Hui feels they are only asking for what they were already promised.

“HK people are guaranteed freedoms under the “one country, two systems” model. They are not asking for something that doesn’t exist, but rights and freedoms that they have grown up with but are vanishing,” she said.

She feels the best way forward for Beijing would be to respect Hong Kong’s autonomy and “follow the promises made in the Sino-British Joint Declaration and the Basic Law.”

Throughout the protests, China’s official line has been that it would respect the principle of “One Nation, Two Systems”, which is supposed to last until 2047. As part of this agreement, signed with the British, Hong Kongers are guaranteed democratic rights under the 'Basic Law', as well as other freedoms not otherwise seen in mainland China. But, many feel these freedoms have been gradually eroded by Beijing over the years.

Explaining its importance, Hui says “The idea was that HK was going to die in 50 years, but that the rest of China would catch up with HK. Now, with China [getting] more authoritarian, HK people find it even more important to stop the erosion of what they have always had.”

As Beijing considers its next move (and the protesters plan theirs), Hong Kong is left with a recession, declining exports, halved tourist arrivals and the threat of losing its status as a global trade hub.

A September poll by the American Chamber of Commerce in Hong Kong found that 20 per cent of respondents were considering “whether to move capital or relocate business functions out of Hong Kong”, while 8 per cent felt that the turmoil had affected their decision to invest further in the city in the future. With over 650,000 foreign residents, Hong Kong has long had a reputation as a global capital—a position that is now at risk due to the unrest and economic uncertainty.

The US recently passed the Hong Kong Human Rights and Democracy Act in both houses of parliament, which could result in the city losing its special trading status; a move that has enraged Beijing.

But, as US President Donald Trump negotiates a delicate trade deal with China that he says is in its "final throes", it remains uncertain as to whether he would sign the measure.

With their demands unmet and their anger unabated, Hong Kong's protesters are unlikely to give up their struggle any time soon.