Julian Assange's father says, 'He is not very well' 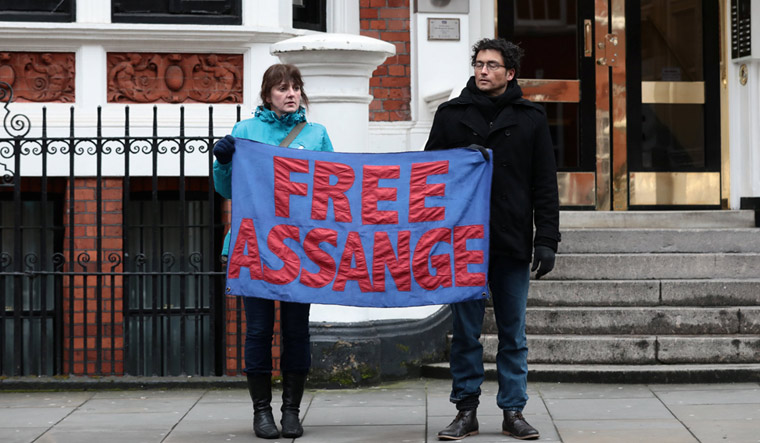 John Shipton, father of WikiLeaks founder Julian Assange said that Assange is being treated in the British prison, but his lawyers insist that the doctors must be of Assange’s choosing. Shipton also said two days ago that he had visited his son and needed to "face the bitter truth that his son may die in jail after nine years of persecution for daring to reveal US war crimes".

Shipton, who said he would like to contact the Russian authorities to receive additional assistance for the release of his son said, “He is not very well. After many years of being persecuted, his health is beginning to suffer badly ... We believe that he can recover if circumstances change very quickly,"

Assange used WikiLeaks to publish classified military and diplomatic files in 2010 about US bombing campaigns in Afghanistan and Iraq that proved highly embarrassing to the US government. Since then, he has been entangled in a web of a judicial proceeding and is currently fighting a US bid to extradite him from Britain on charges filed under the Espionage Act that could land him a sentence of up to 175 years in a US prison.

The 48-year-old whistleblower, who is currently being held at a top-security British prison since April, is now suffering very badly. According to a health expert, Assange's health has deteriorated as a result of his prolonged exposure to stress and psychological trauma, as he has been systematically persecuted.

Nils Melzer, an independent UN rights expert in May condemned the "deliberate and concerted abuse" inflicted on Assange for years by the governments of the US, the UK and Sweden.

Baywatch star Pamela Anderson, who has been Assange's biggest high-profile supporters, has come to say that he has suffered tremendous psychological trauma. She has, in the past even written letters to Australian PM Scott Morrison to stop his extradition. She has also written to Australian Foreign Affairs Minister Marise Payne, US President Donald Trump and first lady Melania Trump, appealing regarding Assange.

Anderson who has already visited Assange in jail is planning another visit this month. "Julian must be allowed to heal in a natural environment that he has been deprived of for so long. The natural beauty of his native country Australia, surrounded by his loving family, is what he urgently needs," the actor added.

Assange, to avoid extradition to Sweden, had been holed up in the embassy of Ecuador in London since 2012, where he was wanted for questioning over accusations of sexual assault, which he has denied. He was dragged out of there in April by British police. Assange awaits hearings on his extradition to the US.