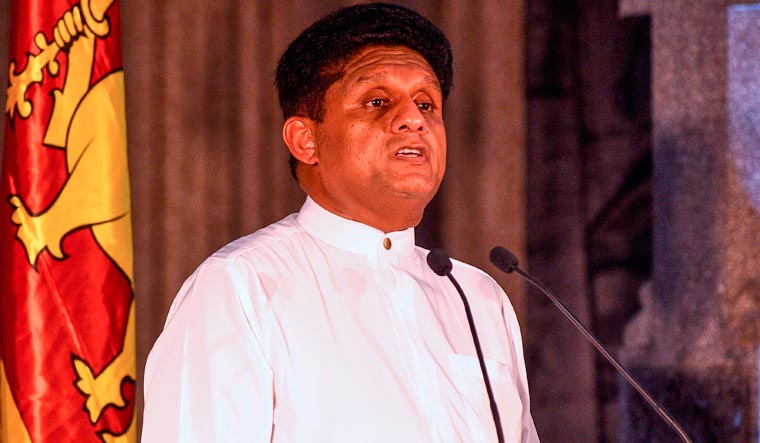 Sajith Premadasa, the presidential contender from Sri Lanka's ruling party, on Thursday proposed the reinstatement of the Senate to ensure devolution of powers to the provinces, a long-pending demand of the minority Tamil community in the country.

Premadasa's manifesto for the November 16 presidential election  features a photograph of him shaking hands with Prime Minister Narendra Modi during his last visit to Colombo.

The manifesto of the the United National Party says "to project our role as the hub of the Indian Ocean, we will pay special attention to building and reinforcing strong links with our neighbours, paying particular attention to nations on the Indian Ocean Rim regions."

Although the proposal does not refer specifically for sharing of power with the Tamil minority, the manifesto advocates "maximum devolution of power within an undivided and indivisible Sri Lanka.

Sri Lanka had a Senate which was abolished in 1971 before the formulation of the 1972 Constitution whereby Sri Lanka left the British sovereign.

The Tamil Tiger rebels fought a three-decade-long civil war to create a separate state for ethnic minority Tamils. The war ended in 2009, with the death of the rebel leader Velupillai Prabhakaran.

"Devolution of power will ensure that we create unity among all Sri Lankans, not only in law and in practice but also in our hearts," the manifesto said.

The manifesto came as over 650,000 voters started postal voting. Persons eligible for postal voting are those involved in official duties on the election day.

As many as 35 candidates are in the fray for the presidential polls in which over 15 million people are eligible to vote to elect the next president for a five-year term. The main contest is between Premadasa, 52, and the main Opposition challenger Gotabhaya Rajapaksa, 70.

According to the media reports, Premadasa said he would relook at all international agreements signed by the past and present  governments.

Premadasa said that he is not bound by any agreement signed before November 16, adding that any decision on the past commitments will be based on the best interest of Sri Lanka.