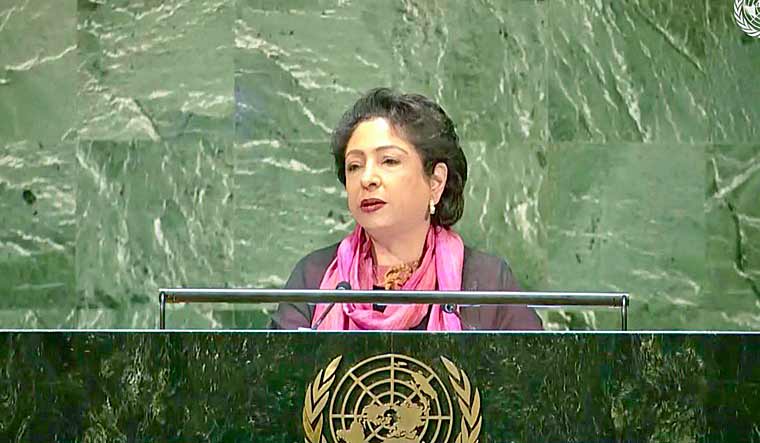 Describing Pakistan as the "hub of terrorism", India has strongly hit back at the country for raking up the Kashmir issue at the Security Council, saying Islamabad misused the UN forum to spread "baseless and deceitful" narratives about it.

Pakistan's envoy to the UN Maleeha Lodhi raised the Kashmir issue during a General Assembly session on Report of the Security Council for 2018 on Friday, and referred to India's August 5 decision to abrogate Article 370 of the Constitution which ended the special status of Jammu and Kashmir.

She said the Security Council must press India to lift the curfew, end the communication blackout and release the detainees.

"There has been yet another attempt by one delegation to misuse this forum to spread baseless and deceitful narratives about my country. Such attempts have not succeeded earlier and will not succeed now," First Secretary in the Permanent Mission of India to the UN Sandeep Kumar Bayyapu said Thursday.

"The truth is that the delegation represents a geographical space that is now widely known as the hub of terrorism that has jeopardised innocent lives in our region and beyond. We do not wish to dignify such baseless diatribes with a response," he said.

On the report of the Security Council, Bayyapu asserted that many of the flaws in the functioning of the Council were structural and its composition is demonstrably out of touch with the ground realities.

"The Council neither reflects nor represents the aspirations and views of the larger membership. Like most others, we remain convinced that the only remedy is a comprehensive reform of the Security Council, involving expansion in its permanent and non-permanent categories," he said.

Bayyapu said that since performance assessment has become one of the focus areas at the United Nations, the Security Council too needs to prove its credibility and improve its performance.

The annual report continues to be a statistical compilation of events, a bland summary and listing of meetings and outcome documents even though the membership of the General Assembly has repeatedly requested the Council that the annual report be more analytical and incisive rather than a mere narration of the meetings of the 15-nation organ of the UN, he said.

"The debate on the annual report has become a ritual and a formality in a long list of formalities. There is a need to reinvigorate this interaction between the most representative organ of the United Nations and its most empowered brethren," he said.

He stressed that the annual report of the Security Council must inform, highlight and analyse the measures that it has decided upon or taken to maintain international peace and security during the reporting period.

Bayyapu also voiced concern that the report was not only lacking in substance but is submitted late in the year, almost towards the last quarter of the next year due to which it does not generate the attention needed for a proper discussion.

"This needs to be rectified. There should be definite timelines for completing the report, circulating to wider GA members and holding the debate earlier not towards the close of the session," he said.

The 74th session of the General Assembly will begin next week and the annual high-level session will begin soon thereafter.

Bayyapu expressed disappointment that the annual report of the Security Council is short of analysis on the UN peacekeeping operations, the flagship tool for the maintenance of international peace and security.

"There is little information on how peacekeeping operations are run, on the problems they face, on why certain mandates are set or changed, or on when and why they are strengthened, scaled down or ended," he said.

He stressed that a better partnership between the Security Council and the Troop Contributing Countries (TCCs) is needed given that most peacekeepers are contributed by non-Council members, who put the lives of their troops at risk to serve the cause of international peace.