The South Korea-Japan spat could derail US plans

S Korea said it would not renew GSOMIA, an information-sharing pact with Japan 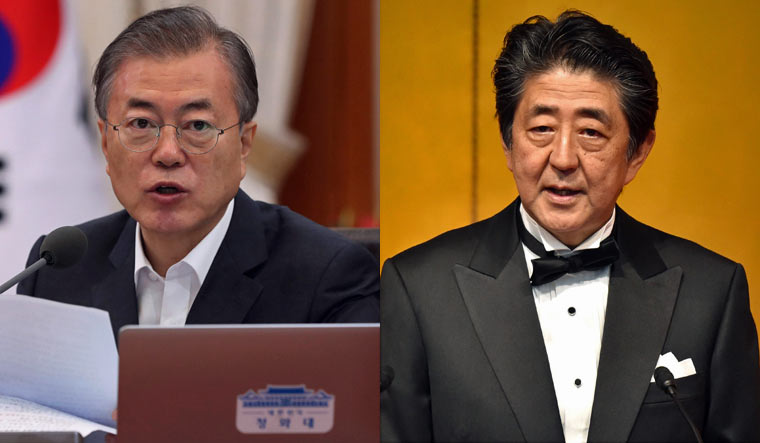 Japan and South Korea, the two leading lights of the US-led geopolitical alliance in north Asia, seem to head towards a bruising break as past trauma and present political concerns tear apart already fraught bilateral ties. On August 28, South Korea said it would not renew the General Security Military Information Agreement (GSOMIA)—a military information-sharing pact, which facilitates the two countries to share intelligence on matters of mutual security concerns along with the United States, ignoring requests from the US. The agreement expires on November 22.

The action was in response to Japan's decision to remove South Korea from its 'white-list', a list of countries entitled to receive preferential treatment in trade and also to impose tight control over the export of semiconductor materials to South Korea. At the bottom of the dispute lies history, which is dominated by the brutal manner in which imperial Japan colonised the Korean peninsula.

Korea was under Japanese occupation from 1910 till Japan's defeat in World War II. During its 35 years of colonisation, Japan forced hundreds of thousands of Korean men to work as slave labourers in Japanese companies, while the women were drafted as sex slaves in the imperial army camps. Even decades after the war got over, South Koreans loathed the Japanese more than the North Koreans or even the Russians. For nearly two decades after World War II, South Korea chose not to have diplomatic ties with Japan. The policy changed during the prime minister-ship of Park Chung-hee, who eyed Japanese capital for developing the struggling Korean economy. Park restarted diplomatic ties in 1965. The treaty of 1965 also addressed the issue of forced labour and “comfort women” and earmarked $800 million ($6.5 billion adjusted for inflation) in economic aid. The treaty deemed that the issue of compensation was settled, which had resulted in massive protests in South Korea, and the situation was brought under control by declaring martial law.

South Korea, soon became a member of the US-led military security alliance along with Japan and was on the path of a speedy economic recovery. Historical grievances got subsequently subsumed by economic and geopolitical concerns, resulting in economic and security integration with Japan. Even the issue of slave workers and comfort women were swept under the carpet. The collapse of the Soviet Union removed a major security threat for South Korea, although the threat from the North was still dire. But when liberal politician Roh Mu-hyun became prime minister in 2003, his administration released vast amounts of documents, listing gruesome details about forced labour and sex slaves. It gave the victims the legal standing to reopen cases and file claims for compensation against Japanese companies.

The Roh government also set up a Joint Private-Government Committee on Measures Pursuant to the Publication of Documents on South Korea-Japan Talks in 2005. The committee found that while some cases of forced labour were settled under the 1965 treaty, the matter of sex slaves, the Korean victims of Hiroshima and Nagasaki and those victims who were sent to fight the Soviet Union in Sakhalin were not addressed. The Constitutional Court of South Korea censured the government for not taking adequate measures to help the victims. When the conservatives were back in power in Seoul, scales tilted back in Tokyo's favour. The Park Geun-hye government, which was alarmed by the nuclear and missile development spearheaded by Kim Jong-un in the North, chose to move closer to Japan. After a lower court ruled in favour of Korean victims who demanded compensation from the Japanese government, the Park government appealed to the Supreme Court and put pressure on the court to delay a decision. Park agreed with Japan in 2015 on sex slaves, which both countries called the “final and irrevocable resolution” on the issue.

But, the anti-Japan sentiment was back in vogue once Park was impeached and the liberals under Moon Jae-in returned to power. Late last year, the South Korean Supreme Court held that individual claims against Japanese companies like Nippon Steel and Mitsubishi Heavy Industries were still valid and ordered them to pay compensation. The court observed that in the absence of action from Japan, victims had the right to initiate legal action to seize and liquidate the assets of offending companies in South Korea. According to rough estimates, the judgement made more than two lakh victims eligible to take action against nearly 300 Japanese companies, which could cost the companies at least $20 billion. It also set a precedent for victims from countries like China and the Philippines.

While Japan opposed the judgement and asked South Korea to honour its commitments under the 1965 treaty, Prime Minister Moon said he would respect the court’s order. Supporters of the victims say Japan's decision to hide behind the treaty was unfair as Japan itself had been a proponent of individual claims when it came to its citizens. For instance, while concluding peace treaties with the US and the Soviet Union after World War II, it did not foreclose the possibility of settling individual claims of the victims of Hiroshima/Nagasaki and Siberian detention centres. Moreover, Japanese companies had paid compensation for Chinese forced labour.

With no resolution in sight for the crisis, Japan initiated retaliatory measures. It imposed restrictions on the sale of chemicals used to make digital displays and semiconductors, saying that it was worried about improper handling of such products, which had military uses. The move has severely hit Korean behemoths like Samsung, hurting global supply chains. Japan has near-monopoly on the production of some of these chemicals—an example is a photoresist, a polymer sensitive to light and a critical component of the electronic industry—commanding 90 per cent of the global production. In the absence of supply from Japan, the Korean semiconductor industry will grind to a halt.

On August 2, Japan removed South Korea from its white-list, a list of countries to which it can export dual-use technologies without stringent inspections or certification. It included several products such as precision tools and advanced carbon fibres vital to South Korea and may not be available from elsewhere. After it got hit where it hurt the most, South Korea retaliated by removing Japan from its white-list, but it quickly realised that Japan, on account of its technological prowess, had a major advantage. While Korea was unable to source Japanese products from elsewhere, Japan could easily purchase products denied by Korea from countries such as Taiwan. It forced Korea to take the confrontation up to the next level by pulling out of the GSOMIA, a military intelligence agreement that allows Japan and South Korea to share intelligence on matters of mutual security concerns, especially North Korea.

The break between Moon and Japanese Prime Minister Shinzo Abe has gone too far and has led to “weaponisation of trade relations”. A nationalist politician, Abe, Japan's longest-serving postwar prime minister, runs on a conservative agenda. In the recent parliamentary elections, he failed to win a two-thirds super-majority, which is required for constitutional reforms. Among other things, Abe has been campaigning for quite some time about changing the self-defence clause attached to the Japanese military. For Abe, adopting a strident nationalist position against South Korea is one of the ways to rally further support in the parliament as well as among the general public. Abe and Moon fundamentally disagree on dealing with North Korea as well. Abe sees the Kim regime as evil and is loathe to any reconciliation with the North. And, he felt left out when Trump led the diplomatic efforts to talk to Kim, which was enthusiastically encouraged by Moon. While the unprecedented summit between the two Koreas and between Trump and Kim did not lead to any major outcomes, it raised the diplomatic profile of Kim and Moon, even as Abe was left in the lurch. His negotiating track with Kim failed to make any headway as issues important for the Japanese, including the return of Japanese hostages kidnapped by the North and a moratorium on weapons testing, did not work out well.

One of the reasons why the rift between Japan and South Korea has deteriorated so much is the fact that both countries are on a course correction mode. In the postwar global order, both countries had their priorities somewhat aligned. Japan needed acceptance across the world and to ensure the world that it had given up its aggressive world view. South Korea was focused on economic growth and it needed Japanese technology and capital for the purposes. And both countries were reliant on the American security umbrella. In the changed circumstances, Japan is charting an independent foreign policy course and it feels that it has gone out of the way to accommodate South Korean concerns and complaints regarding its inglorious imperial past. Korea, on the other hand, is now a developed country and no longer relies on Japan's support, politically or economically. And, people in both countries are also growing more nationalistic.

The absence of a stabilising American hand has also added to the concern. Unlike American presidents of the past, Trump runs a foreign policy without any regard for concerns of other countries and has made no particular effort to mediate between two of America's staunchest allies in Asia. As a result, Japan and Korea are drifting apart dangerously. The mutual feeling of animosity is growing in both countries, the Koreans are boycotting Japanese products and both countries are even considering issuing travel advisories targeting each other.

It is unlikely that Japan and South Korea will be able to rein in their differences and bring other control their deteriorating ties any time soon. It seems the US will have to step in and bring Abe and Moon to the negotiating table before things get out of hand completely.