Malnutrition began to increase in 2015 post decades of decline 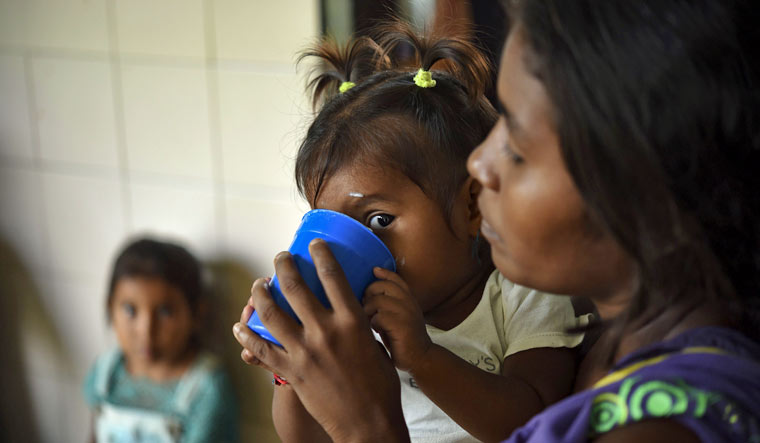 [File] Yukpa indigenous children, some of them suffering from malnutrition, are fed with supplements provided by CARITAS organization, at Los Angeles del Tukuko mission, near Machiques, Zulia state, Venezuela | AFP

As per a UN report, more than 821 million people were not getting enough to eat as of 2018. This is the third year in a row that the number has risen.

Malnutrition began to increase in 2015 post decades of decline. The causes have been reported as climate change and war. Reversing the trend is one of the 2030 targets of the UN’s Sustainable Development Goals which aim to improve the planet and its people.

“We will not achieve zero hunger by 2030,” said David Beasley, head of the World Food Programme, one of the UN agencies contributing to the report.

Getting to a world where no one is suffering from hunger by then remains an “immense challenge,” the report said. It also noted that the number of people without enough to eat had risen from 811 million in 2017.

“That’s a bad trend. Without food security we will never have peace and stability,” said Beasley, deploring that the media carry more talk about Brexit and Donald Trump than children dying of hunger. The unusual increase in the number of people affected by hunger poses a serious threat to UN's sustainable development plans.

Beasley warned that extremist groups were using hunger and control over food supplies as a weapon to divide communities or recruit new members.

“To safeguard food security and nutrition, it is critical to already have in place economic and social policies to counteract the effects of adverse economic cycles when they arrive, while avoiding cuts in essential services, such as healthcare and education, at all costs,” the report read.

A “structural transformation” was needed to include the poorest people in the world, the authors said.

This would require “integrating food security and nutrition concerns into poverty reduction efforts” while tackling gender inequality and the exclusion of certain social groups, they said.

The number of people facing hunger in Asia was the highest at 513.9 million followed by Africa with 256.1million

The UN, at the same time, noted that obesity and excess weight are both on the rise in all regions, with school-age children and adults being particularly affected.