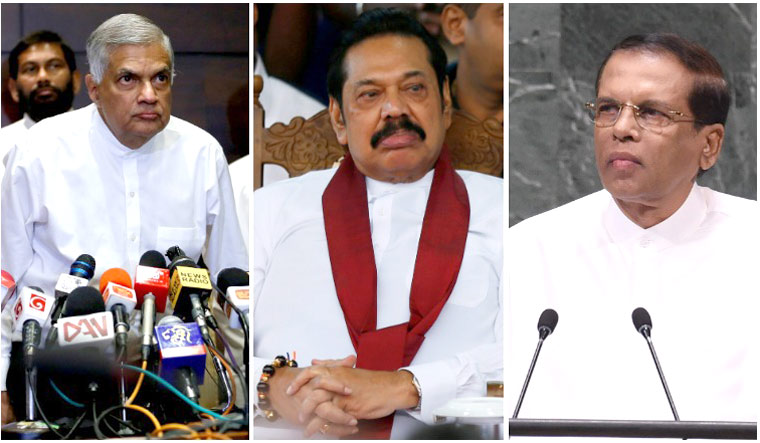 In an attempt to resolve the political grid lock in Sri Lanka, the legislators and parliamentarians from the Tamil National Alliance (TNA) on Tuesday called on Colombo-based diplomats of various embassies in the island nation. The meeting among several diplomats and 14 MPs from the TNA lasted for an hour, where the legislators briefed the diplomats on the current political developments.

“Such a political crisis without a government or a prime minister could embolden the anti-social elements in the country to take law into their own hands. It impairs the efforts for a political solution through a constitutional reform,” said Rajavarothiam Sampanthan, leader of the opposition, after the meeting with the diplomats.

The meeting, called by a few MPs, drew a huge response with Colombo-based diplomats of the US, the UK, the European Union, Australia and India taking part in it. “It is like on to a road of Greece (-like) situation. We explained this to the diplomats,” Sampanthan explained. The TNA is believed to have briefed the diplomats on various reports that were scheduled to be tabled in the parliament. The latest report on constitutional reform was scheduled to be tabled on November 7. But it did not see the light of the day as President Maithiripala Sirisena pulled the plug on October 26, by replacing the prime minister of the country. “The government’s assurance on returning the remaining military-occupied land belonging to civilians in war-affected areas, the release of political prisoners, ongoing work of the office on missing persons and efforts to set up the office for reparations have still not been fulfilled,” added Sampanthan.

In the meantime, the new cabinet is all set to meet at the President secretariat, headed by the purported Prime Minister Mahinda Rajapaksa, at a time, when the TNA and other parties have moved a motion in the parliament to cut off budgetary allocations to the Prime Minister Secretariat. “This is just a token. The motion will be taken up for voting on November 29,” said M.A. Sumanthiran. While the political parties are trying hard to resolve the coup, Sirisena, sources said, is not likely to yield to any pressure.

Read: Twist in the isle

On the other hand, in what could be called a massive blow to the Sri Lankan economy, Moody’s on Tuesday had downgraded Sri Lanka’s credit rating to B2 Stable, despite pleas from the Central Bank of Sri Lanka. “This is the result of the political crisis. This is the first biggest downfall to the economy,” said Dr Harsha DeSilva, a UNP MP.

While the political crisis has entered into the third week with no likely solution in the immediate future, the transfer of a CID official created a flutter in Sri Lanka. Later the police department withdrew the transfer as it turned into a controversy. Sirisena, on Monday had transferred Chief Inspector Nishantha Silva from the Criminal Investigation Department (CID). Silva was investigating several high-profile cases, including ones that allegedly involve Mahinda Rajapaksa and his family members and the military, was transferred on Monday, only to be taken back to work from the same position on Tuesday.

The officer, according to sources, had made headway in the cases and was close to making key arrests in some of them. He was also investigating the killing of senior journalist Lasantha Wickremetunghe. He was also handling the abduction case of dissident cartoonist Prageeth Eknaligoda, and the abduction and murder of 11 young men allegedly by a naval officer. The cases were registered between 2008 and 2010, during Rajapaksa's regime. These are looked at as the important cases that will pin down the Rajapaksas.

However, as the transfer created a huge dissident among political observers and like-minded people in the country, Silva’s transfer order was soon revoked.