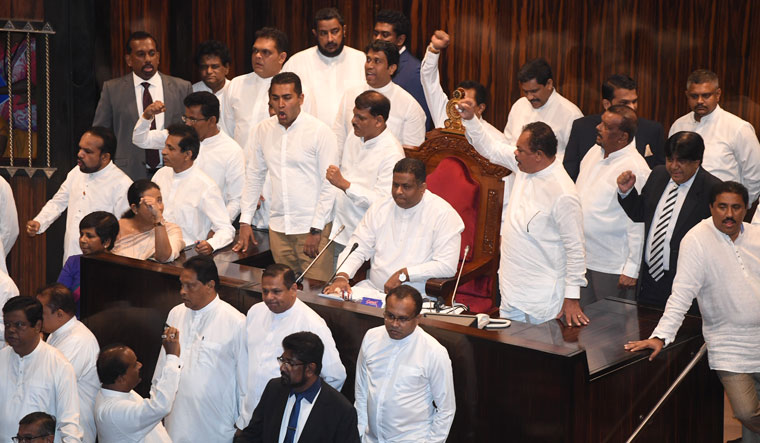 Sri Lanka's parliament on Friday witnessed fresh scenes of chaos. Chilli powder was thrown at MPs, chairs were broken and thrown at police officers, constitution books were torn into pieces and thrown at MPs and tables were turned upside down. Amid all the chaos, a no confidence motion was brought in against purported prime minister Mahinda Rajapaksa for the second time in three days.

Legislators backing the SLPP leader and disputed prime minister Rajapaksa were tried hard to prevent the no trust vote against Rajapaksa from happening. The MPs, however, once again failed to prevent the parliament from passing the no confidence motion, dismissing Rajapaksa's government for the second time this week. In fact, it was the latest violent incident in the political crisis in the island nation that brought Sri Lanka’s strong man down once again.

But what came as a surprise for the Rajapaksa faction was that their attempts to disrupt the parliament did not yield the results they expected. The house was disrupted for 45 minutes, with the legislators raising slogans, demanding the arrest of legislators who got a knife to the parliament on Thursday.

The house, which was to be reconvened at 1.30pm, did not see any official action till 22.15pm. The foreign diplomats and visitors in the gallery, who had come to watch the parliament proceedings, looked embarrassed as one of the MPs, standing in the well of the house, protested against them. “What is the need for the western countries to get involved in our country’s internal affairs,” he shouted.

As the chaos and commotion did not seem to stop, for the first time in the history of Sri Lankan parliament, a huge battalion of police was brought in to the house to take control of the situation. As Speaker Karu Jayasuriya walked in, legislators belonging to SLPP and others, supporting Rajapaksa, staged protest. The police got him a new chair as his chair was occupied by the protesting MPs.

Agitated over the police getting him a new chair, the MPs broke the chair of the speaker into pieces.

Copies of the constitution were thrown at the speaker and the policemen protecting him. Chilli powder and shoes were hurled at the JVP MPs who moved the no confidence motion against Rajapaksa.

Rajapaksa, who was watching his men standing in the mace and protesting, left in silently as the no confidence motion against him was once again passed by the speaker. This time, however, the motion did not have any mention of the misconduct on the part of President Maithripala Sirisena. The change, according to some of the legislators,was an indication of the president recognising the motion this time.

“The first clause against the president, which was present in the first motion, was removed only because the president wanted it. Now we feel the president will agree to terminate Rajapaksa’s leadership,” said one of the legislators.

“It is shameful. This was the most undemocratic day the parliament witnessed. He and his group behaved like animals,” said Vijitha Herath, the Janatha Vimukthi Peramuna legislator who was seated on the first row. It was his party which had moved the no confidence motion against the prime minister.

Vijitha was seen bleeding from his forehead and was offered first aid in the parliament itself even as some of the legislators threw chilli powder on him.