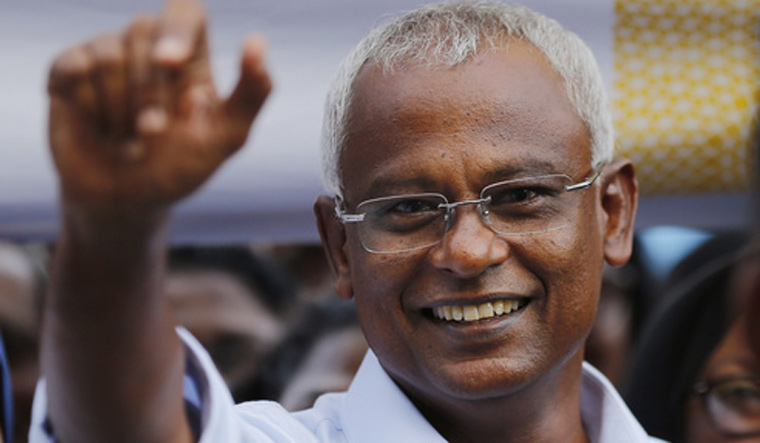 It's official. Ibrahim 'Ibu' Mohamed Solih will be the new president of Maldives. The election results were finally declared on Saturday, ending any fears that the opposition may have had about outgoing president Abdulla Yameen interfering in the results.

In a tweet, Ibu congratulated the people of Maldives, saying, “Today we are victorious.'' In the week till the results were declared, there was a real fear that Yameen might have had “second thoughts''.

However, with the military promising to uphold the results and the international community stepping in to help in the transition period, it seems that the election result will stand.

The win in Maldives has offered India a ray of hope in a week dominated by foreign affairs disasters for New Delhi. The relationship between the two countries had been at the lowest ebb as Yameen had courted China openly. India was in the embarrassing position of having to take back a helicopter it had gifted Male. What started as a cold war, ended up as a serious diplomatic snub for India.

For Maldives, the challenge begins now. Winning the election will have been the easy part. Mohamed Solih is the joint presidential candidate for the opposition alliance—which includes the Maldivian Democratic Party (MDP), the Jumhoree Party and the Adhaalath Party. Solih will now need to keep this diverse group together.

This will be the real test of democracy in Maldives. And for India, banking on this new set-up, the challenge will be to ensure that it remains engaged.

“If this experiment fails, it paves the way for another strongman coming to power. India’s role will be an earnest broker between these different contending factions. And whether we can play this role effectively, in keeping the expectations of the people. This has never been easy for India because we have become part of the domestic political discourse in our neighbourhood. This will be tricky,’’ says Pant.

India’s current relationship with its neighbourhood proves that this balance will be a steep learning curve. For Nepal, which had been calmed down, it took two visits by Prime Minister Narendra Modi, and three by External Affairs Minister Sushma Swaraj, to bring the bilateral equation back to warmer. In the past month, the relationship has soured again. Even in the controlled experiment of democracy in Bhutan, India has emerged as a factor, and not in a positive way. Sri Lanka is in debt to China.

As is Maldives, with the Chinese debt at 150 per cent of the GDP.

The economy will be a real issue for Maldives. It will literally buy China influence in the country. And India, so far, is not likely to offer an alternative. Friendship may be a given with Solih, but India will have do hard work to ensure that the relationship remains happy. China is a reality that will not go away.

Despite the new Maldivian government’s promise to review contracts, China has, like in Sri Lanka, made inroads into the economy. “Even a very pro-Indian government will not turn down Chinese investment. They will not want to jeopardise their relationship with a rising economic power,’’ says Pant.

There is the Chinese FTA, passed in five minutes, as Hamid Abdul Ghafoor—international spokesperson for the Maldivian Democratic Party—puts it. And the shiny Chinese bridge, which caused much heartburn in India, is a project that ensured that Maldives will remain in debt for a long time.

Even at the outset, there is an expectation from India to do more. Can India step up to the plate?