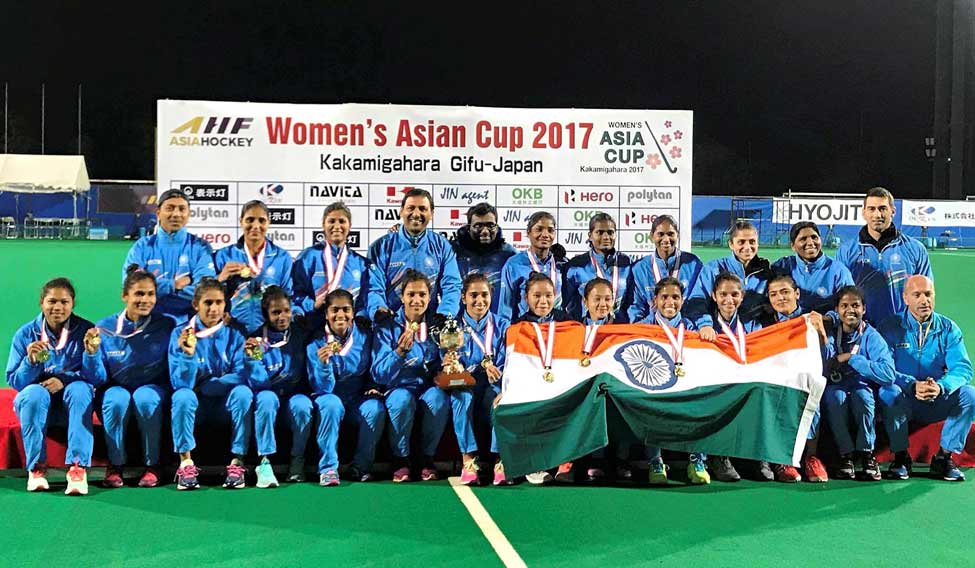 Hockey India on Monday announced a cash award of Rs one lakh each to the victorious 18-member women's team and chief coach Harendra Singh for guiding the squad to lift the Asia Cup and qualify for next year's World Cup in England.

The HI also announced Rs 50,000 each for the support staff who were part of the team, who beat China 5-4 in a nail-biting final on Sunday.

"This is truly a commendable achievement by the Indian women's team bringing back the Asia Cup after 13 years. They have shown great spirit and determination to win this tournament and have rightfully qualified for the World Cup next year as Continental Champions," HI Secretary General Md. Mushtaque Ahmad said in a statement.

"Hockey India congratulates captain (Ritu) Rani and the entire team, including the support staff and coaching staff for this victory. We are extremely proud of this win and wish them the very best for future tournaments," he added.

The final match went into a penalty shootout where Rani scored in sudden death and goalkeeper Savita made a brilliant save after the two teams were at a 4-4 deadlock after five penalty shootout attempts.

India showcased incredible form throughout the tournament, winning all their Pool stage matches against Singapore, China, Malaysia before beating Kazakhstan and defending champions Japan in the knock-outs.

The team scored a total of 28 goals and conceded only five goals in the entire tournament, proving their domination right from the first match where they beat Singapore 10-0.

Your form could not be submitted.
This browser settings will not support to add bookmarks programmatically. Please press Ctrl+D or change settings to bookmark this page.
Topics : #Hockey