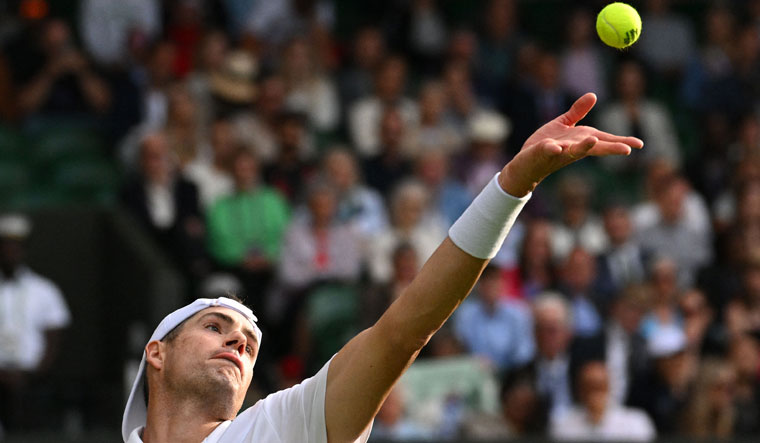 John Isner in action at the Wimbledon Championships | AFP

Novak Djokovic continued his strong run at the Wimbledon with a clinical decimation of compatriot Miomir Kecmanovic.

Chasing a fourth successive Wimbledon title, Djokovic reached the last 16 in the tournament for the 14th time with a 6-0 6-3 6-4 victory on Friday. The top seed will now play against Dutch wildcard Tim van Rijthoven.

Needing five aces to beat Ivo Karlovic's record 13,728, Isner hit three past Italian youngster Jannik Sinner in the first game of their third-round match, and three more in the second.

In women's singles, Belgian Elise Mertens beat an error-prone former Wimbledon champion Angelique Kerber of Germany 6-4 7-5 to enter the fourth round. The 26-year-old Belgian will next meet third seed Ons Jabeur of Tunisia for a place in the quarterfinals.

Third-seeded Jabeur advanced to the fourth round with a 6-2, 6-3 victory over Diane Parry of France.

Jabeur reached the quarterfinals a year ago at the All England Club.

Also, Heather Watson reached the fourth round for the first time with a 7-6 (6), 6-2 win over Kaja Juvan of Slovenia. The 30-year-old Briton is making her 12th singles appearance at the All England Club.

Watson will next face Jule Niemeier of Germany.

Jelena Ostapenko advanced to the fourth round after winning 12 of the last 13 games against Irina-Camelia Begu.

The 12th-seeded Ostapenko trailed 6-3, 1-0 when she turned things around. She won nine straight games to take a 3-0 lead in the deciding set before Begu was able to hold serve again.

Ostapenko then had to save a break point in the next game before taking a 4-1 lead.

Ostapenko reached the semifinals at the All England Club in 2018 and last week reached the final at the grass-court warmup tournament in Eastbourne, England.

Qualifier Jack Sock became the eighth American man to reach the third round at Wimbledon with a 6-4, 6-4, 3-6, 7-6 (1) victory over compatriot Maxime Cressy.

Those eight account for a quarter of the 32 players in the third round, the most for the United States at the grass-court Grand Slam tournament since 1995. It's also the most at any major since the 1996 US Open.