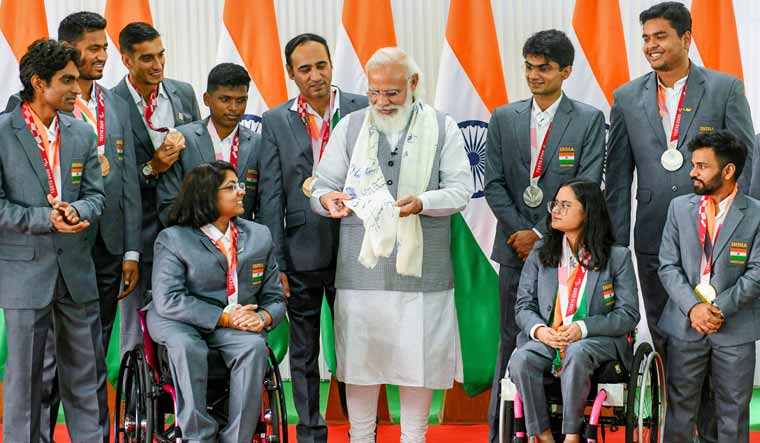 Moving swiftly from one table to another, Prime Minister Narendra Modi recognised, exhorted, lauded and patted the athletes for their incredible performance in the Tokyo Paralympics, telling them that he felt motivated and inspired watching them compete.

Recognising their stellar campaign in Tokyo, which yielded an unprecedented 19 medals, including five golds, Modi said India's celebrated Paralympic athletes have a "lot more to offer" to the country and urged them to play a role outside the sports arena to bring about a change.

"I get motivation, inspiration from you all," he said during the interaction on Thursday, the video of which was made public on Sunday.

Modi was presented with an autographed stole and their personal gear by the athletes.

“Aapne haari hui maansikta ko haraa diya, bohot badi baat hai (You have defeated a defeatist mindset with your achievements, it's a big thing)," he added.

He pledged his support to the players and said the whole country shares their dreams of sporting excellence.

"You have a lot to offer to the country... the future is bright and I am always there to support you, your dream is our dream and to realise that, I will do all it takes," he added.

On Thursday, the prime minister hosted the Indian contingent for Tokyo 2020 Games at his residence in a breakfast meet.

Well-versed with their back-stories and the Paralympic campaign, Modi asked gold-winning shuttler Krishna Nagar his thoughts behind dedicating his medal to COVID-19 warriors.

"I found it very touching, but what were you thinking when you did that?" asked Modi.

"I saw health workers doing their duty without thinking about themselves; that's what inspired me to make that gesture," responded Nagar.

Athletes got candid during the interaction, with silver-winning paddler Bhavinaben Patel revealing that she overcame a viral infection and bout of fever during the Games.

"I didn't have a good first match because of that. It was a difficult day but I thought of your words during the send-off and I was not among those who met you that day. So I decided that I would everything to meet you. I also thought that this might be my only chance," she said.

"Never think negatively; you are a giant-killer," Modi said.

During the interaction, Modi congratulated them for their record-breaking performance at the Games.

The Paralympics was held from August 24 to September 5 in Tokyo where India had sent its biggest contingent. A total of 54 Indian athletes competed across nine sports events.

The PM said the achievements of the para athletes will help develop a sporting culture in the country.

"I think there needs to be a workshop on coaching disabled athletes; a book can also be written," Modi said lauding the indomitable spirit and willpower of the athletes.

Present during the session was 19-year-old shooter Avani Lekhara, who won a gold and bronze, India's greatest-ever paralympian Devendra Jhajharia, and shooters Singhraj Adhana and Manish Narwal, among others alongside sports minister Anurag Thakur and his predecessor Kiren Rijiju.

"Like you had told us during the send-off, give your best and don't take any pressure, I only did that during the Games. Medals happened by sticking to that," said Lekhara, the first Indian woman to win a gold and two medals at the Games.

Like he did with the Olympic-returned stars, the PM also advised the para athletes to not let success get to their head and defeat trouble their mind.

"Your indomitable spirit and willpower are praiseworthy in light of the insurmountable odds that the para-athletes have overcome in their lives," said Modi during his interaction.

The para-athletes thanked the prime minister for inviting them and said that they feel honoured to share a table with him, terming it a big achievement for them.

Speaking during the session, Jhajharia, who won his first gold medal at the 2004 Athens Games, said his mother had to sell her jewellery to fund his trip to the Greek capital, highlighting the change that has happened since then.

What has come as a pleasant surprise for the athletes is that the PM also knew some of their backstories of struggles.