Year of COVID-19: Through the eyes of top Indian sportspersons 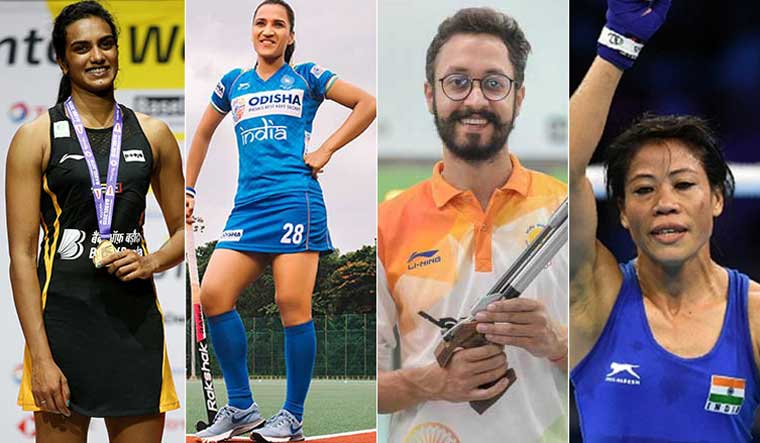 It has been a year like no other. For elite sportspersons, four years of blood and sweat, competition, hard work, training, pain, wins and losses were all about making it to the Tokyo Olympics 2020 and eyeing that podium finish. But all the well-laid plans and efforts came to nought when COVID-19 struck. The lockdown became gruesome for some who had never been restricted to indoors for so long. Most athletes' lives have been about training camps, travelling for competition and performing before crowds. Suddenly, it became about solitary practice, or even playing with teammates in a bio-bubble. No competition or travelling, has taken quite some getting used to. THE WEEK spoke to some of India's top sportspersons on the year gone by and how it has affected them. Excerpts:

Q/ HOW HAS COVID-19 CHANGED YOUR SPORT?

A/ Definitely, COVID-19 has changed a lot of things. Every time I would be busy playing tournaments and having a packed schedule, but for the first time I have got such a long break and I didn't play any tournaments. I was at home spending time with family. In sports, too, COVID-19 has changed many things. Earlier, spectators would come and support us on the court but now even they are going to miss watching live badminton action.

A/ Well, I suppose the pandemic hasn't yet really changed the sport much because we haven't had a chance to participate in competitive matches. But, I've seen some FIH Hockey Pro League matches, which took place in Europe, and I couldn't really spot any differences, apart from the crowd not being there to cheer the players on. We all remain optimistic and hope to see the fans back in the stadiums and the sport resume soon.

A/ I think the sport has remained the same, but the way we approach certain things has changed. We are more cautious of what we do, and what we use on the field, for instance, our equipment. Especially, as a goalkeeper, I need to make sure my equipment is sanitised properly, and that I am careful with it. Previously, I would keep it anywhere I want, especially when we used to practise, but now it is about following all the protocols and making sure we are all safe.

A/ It has affected the entire sports fraternity, including shooting. We were unable to go to training at the range because they were closed during lockdown. In general, I don’t take any weekly off from my training. I usually train 365 days a year but due to corona, I was forced to take a long holiday. Only the 10m air pistol and air rifle shooters were able to start their training at home after lockdown ended. And still, after that, ranges were closed.

A/ It has shrunk my boxing ring to my campus lawn at home and has become a one man's game for now.

Q/ HOW HAS IT AFFECTED YOU MENTALLY?

A/ I wouldn't say it affected mentally but definitely, it felt sad that I had so much of a break and I couldn't play tournaments. But, it was the first time I got so much time to spend at home which sportspeople don't usually get, so it's a different feeling spending a lot of time with family. During these times, I kept motivating myself and kept training at home. I took this break in a positive way so that I can learn more during this long break and also took it as an opportunity to improvise a lot.

A/ At first, it was a bit tough because ever since I've been representing India, I've never had to go through something like this where you aren't playing the sport for such a long period of time. But the pandemic definitely posed some challenges, and I am really happy that we stuck together as a unit. I would also like to credit our support staff, chief coach, Hockey India and SAI for the support that they provided to us, and for the easy resumption of sports activities where we were given a set of SOPs to work with. I think I can speak on behalf of the team when I say that we were all happy to have resumed some kind of physical activity, and also keep our minds fresh.

A/ I think staying with my teammates in the national camp for most part really helped because we could all relate to what we were feeling—the emotions of not being able to play, not being able to compete with other players, and for some part, not even being able to watch any live sports. So, that was tough to take, but we made sure we shared a lot with each other, and I think our mental strength also improved through this. We came closer as a team, and I am happy that Hockey India and SAI took care of us, and made sure that we were all feeling safe and healthy at all times.

A/ We were about to enter Tokyo before corona came! Olympics was delayed for a year. The whole Indian shooting team was fully prepared for the Olympic Games and suddenly this happened. So, we all were mentally exhausted during lockdown mainly because we were not able to do our normal training nor physical workouts at the gym. I personally focused more on my mental training like meditation to overcome this mental stress.

A/ Though it has changed the entire system and the future seems a bit unclear, I am still at ease and only focusing on my training because I am in that same situation in which everyone is. I am mentally strong and determined to win an Olympic medal and my preparations are on.

Q/ HOW HAS IT AFFECTED YOUR PREPARATIONS?

A/ Preparations are going well. Earlier, when I wasn't able to train on court, I used to train at home. Once I resumed training on courts, it took me a couple of weeks to get going but at this point of time everything is going well and I am 100 per cent at the moment.

A/ I don't really think it has affected our preparations because we are doing exactly the same things we would've been doing had the sport not stopped. But yes, when it comes to following the SOPs and the protocols, there have been some adjustments we've had to make. We've been careful with each and every session of our sports activities, but our focus has remained intact. We have also gotten more time to prepare for the Olympics, and we're definitely trying to make the most of it.

A/ Well, for me, as a goalkeeper, it is a good thing that I've got more time to prepare for my opponents, but at the same time I need to be playing at the highest level to remain at my best throughout. I feel this break certainly made players rusty, but since we've been able to resume sports activities while following SOPs, we've managed to get back to our best. Towards the end of our last national camp, we are at a similar level to February this year when we were playing the FIH Hockey Pro League, so I think all in all, everything is back on track when it comes to our preparations.

A/ As I said earlier that we were unable to do our training, locked in our homes and some shooters also didn't have weapons with them during lockdown. They haven’t even done dry training. In this case, I was lucky because I had my pistol with me and I was able to do dry training and holding at home with my weapon. Taking this Olympic postponement in a positive way, I think that this one year gap will make all of us even more stronger than we were before lockdown.

A/ The initial plans had taken a hit for sure. But it's not me alone as I said before. One has to accept the situation and keep the focus. I train at home without partners, which is the only thing that is not normal but once things get better, I will be back to it soon. But, I am making the best use of this situation and am confident of a comeback soon. Till then, let's all be safe and take care of ourselves.

Q/ WHAT DO YOU MISS THE MOST COMPARED TO THE PRE-COVID ERA?

A/ I really miss playing tournaments. But now, with tournaments starting from January, I am really looking forward to playing the Thailand Open and performing well.

A/ I definitely miss the feeling of playing competitive matches against the best teams in the world, and also to have the support of our fans behind us. I think when you're playing matches almost throughout the year, you get to experience a lot of emotions, a lot of ups and downs, and you learn a lot from them. So, that has certainly been amiss since the pandemic struck.

A/ I think I miss having that outlet you have when we didn't have any restrictions because of COVID-19. When you're a top-level athlete, you tend to feel a lot of emotions during your career, and I've always tried to share those emotions with people around me. When we could go out, we would have a coffee and spend some time off the field as well, but that has really changed now. Everyone remains really cautious, which is also a good thing because we are safe that way. I also miss playing in front of huge crowds, and making those crucial saves for India. So, I hope that we can get back to normalcy in the near future.

A/ Earlier, we used to travel a lot for competitions or training but now, in 2020, everything was cancelled and I am missing all those competitions and travelling.

A/ Being in the ring and fighting in a match. I missed my training with my fellow boxers, too.