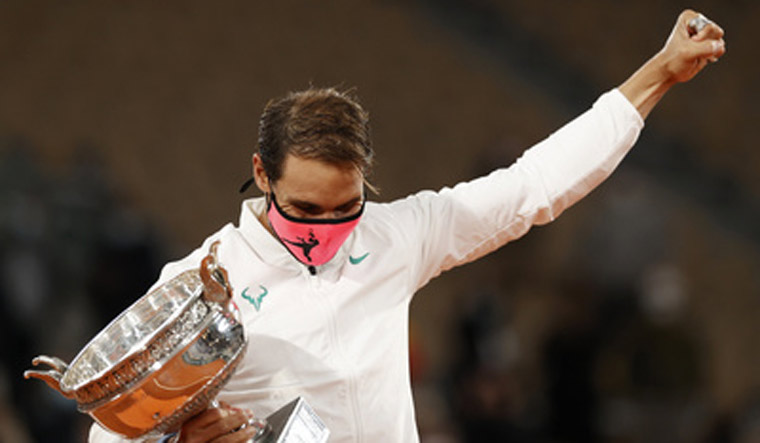 HERE, THERE, EVERYWHERE, that’s how Nadal was as he cemented his place as the King of Clay (as if there was any doubt), lifting his 13th Roland Garros title. The Spaniard beat Djokovic 6-0, 6-2, 7-5 to win his 20th Grand Slam. He is now level with Roger Federer on the leaderboard for most Grand Slam wins. Despite a spirited effort from Djokovic, it wasn’t enough to break through Nadal who put on a show worthy of a Grand Slam final.

Despite an abbreviated tennis season this year due to the coronavirus pandemic, Nadal was as match-fit as he ever was. Although there was an unusually high number of unforced errors on his part, Djokovic was relentless in attack, but Nadal had all the answers. Djokovic was composed throughout the match, despite being dismantled by Nadal from the start of the game. The intensity and level from Nadal with few unforced errors was outstanding, fitting a 100th win. It was a gargantuan battle between two titans and Nadal had to put up arguably the greatest ever clay court performance to win the match.

The first set wasn’t all about Nadal, although he won it 6-0. Despite being handed a bagel in the opening set, Djokovic did give Nadal quite a fight. The set lasted over 45 minutes, with Djokovic and Nadal exchanging some excellent rallies. Both men pushed each other to the brink but it was Nadal who won the crucial points. Both men showed why they are number one and number two in the world, but it was the ‘King of Clay’ who came out on top. It was Djokovic’s first serve that let him down. The Serb only got 42 per cent of his first serves in, and won only 27 per cent of those. Nadal, on the other hand, was able to get 76 per cent of his first serves in, winning 63 per cent of them. Djokovic hit more winners (11) than Nadal (10), but made way too many unforced errors (13) compared to Nadal (2). Those unforced errors came at crucial moments of the set, handing Nadal a 6-0 win.

The second set began the same way as the first. Djokovic was broken in the first game before finally winning in his second service game. It took a lot of work, saving three break points in the process. Djokovic got his scoreboard ticking 55 minutes after his first serve. Despite some breath-taking attacking play from the world number one, it wasn’t enough to get through Nadal. His defence on the baseline was too good for Djokovic. Some good defensive shots saw Nadal turn defence into attack, thus unsettling Djokovic. The second set also saw Djokovic’s share of unforced errors creeping up. The Serb hit 17 unforced errors to Nadal’s 4. Of the 59 points played, Nadal won 35. The Spaniard was ruthless in attack and wasted no opportunity to win the point.

Djokovic started the third set strong, winning his service game to 15. Djokovic was relentless in the third set with the French crowd behind him, but Nadal had all the answers. In the sixth game, it looked like Djokovic might just sneak a breakthrough at 30-40, but an excellent net play by Nadal took it to deuce. But Djokovic wasn’t going to go down without a fight and broke Nadal for the first time to take the set back on serve. He went on to hold his serve, smothering Nadal with two consecutive points. Both men had two huge service holds to follow but it was Nadal who broke in the 11th game to serve for the championship at 6-5. Nadal closed out the match with an ace to win his 13th Roland Garros title.

His 100th Roland Garros win couldn’t have come out at a better time. In a match of titans, both walked a fine line but unfortunately on the day, it was Djokovic who went over. But to Nadal’s credit, it was he who put on a scintillating display to send Djokovic off his guard.

Despite what the scoreline suggested, the match was far from a cakewalk for Nadal. What was bizarre was that so many of the points were tight and were well contested and it did feel like Djokovic was just a point or two away from finding his feet. But Nadal was just too good in the end. He was composed throughout the match and was surgical in his baseline game.