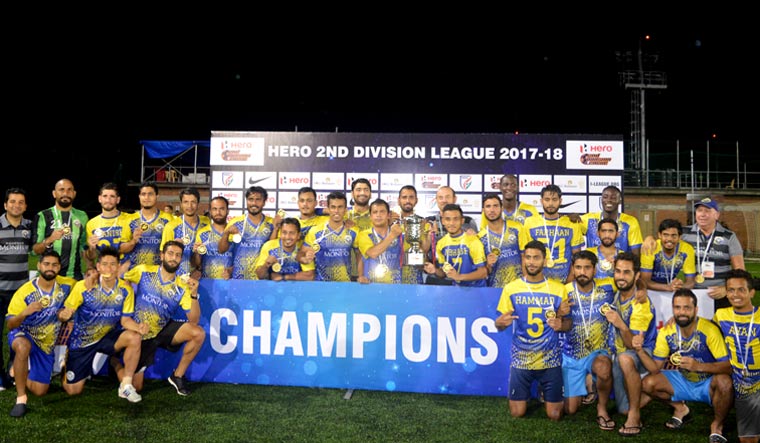 That was the year when the valley was paralysed due to unrest after the alleged encounter of militant Burhan Wani.

Cut to May 30, 2018, both the local and national papers announced the club's coming out party: “Kashmir gets football wings”.

On Wednesday, Real Kashmir Football Club became the first team from the valley to qualify for the I-League after topping the second division league. They will now play with the big boys of Indian football.

In a span of two years since their birth, the Real Kashmir Football Club—formed for a recreation purpose by two friends Sandeep Chattoo, a Kashmiri pandit and a local hotelier and Shamim Meraj, a Kashmiri Muslim—has gone on to become one of the brightest stories of sporting success from the valley in India.

This is the heartwarming story of a club whose seeds were actually sown in the aftermath of the devastating floods that submerged the valley in 2014. Meraj, who is also the editor of his family-owned local newspaper Kashmir Monitor, saw youngsters idling away their time in various nooks and crannies of Srinagar as most of the playgrounds were submerged. “I was out with my friends in the city for a stroll. We decided to do something that could engage them. I requested a couple of my friends to send footballs for them. That's when the idea of forming a small club struck me,” Meraj told THE WEEK.

And so, they formed the Real Kashmir Football Club in April 2016. Meraj received a letter from J&K Football Association that the club would represent the state in the Durand Cup at a time when almost all known clubs from the state were unwilling to participate in the tournament due to the ongoing unrest.

“Interestingly, RKFC had not played a single match in the local League,” Meraj admits. “I would not have accepted that letter had I known earlier what it entails! We had no idea what goes into playing at that level. We were not prepared financially or football wise,” said Meraj.

And so they went—a ragtag team which consisted of local players, with majority from the J&K bank. That was the year when RKFC got “ hammered”, in Meraj's own words. They played against the likes of Aizawl FC, Neroca FC, Dempo SC, Army and Air Force teams and predictably ended up last. They scored four goals in five matches and conceded 14.

The lesson on how to prepare for a season was quickly learnt. “Last year (2017) was a proper season for us; we planned in advance. We held our camp in January,” said Meraj. At home, the club trains at the Tourist Reception Centre ground which is an open field with no fencing.

The founder of the club is not over the moon by this sudden attention his club is garnering. “This is just the beginning. It was a big day no doubt, but that was yesterday. We look forward to playing tomorrow. Entering I-League, which is the biggest tournament, is huge but we have problems. We do not have a stadium to train; the stadium which exists does not even have toilets. We are a small club. There's a lot that needs to be done for us to compete with the big clubs. Squad needs to be finalised, see what we can afford. We don't have a budget. We have our feet on the ground,” he said.

The team boasts of two foreign coaches: David Robertson, chief coach and former Scotland international and Glasgow Ranger's player, and an assistant coach. There's an interesting backstory to Robertson coaching the RKFC. “I got his contact through an agent.” Robertson arrived as he had never visited India. It was snowing when he arrived and when he saw the facilities, he wanted to leave. “Robertson, however, stayed on for two years,” said Meraj, with a laugh. “Sometimes the coach, too, puts his own money into the club!”

The recent success, Meraj hopes, will shake up the state government which he claims has not helped the local team in any way. “In fact, they owe us money which they had promised. Hopefully, now they will give it so that we can clear our dues.”

It is important to note that football has always been a popular sport in the valley. It has a strong history, too. The most famous player to come out of the state was Abdul Majid who captained India in the 1980s in the Nehru Cup. He played for Mohun Bagan at a time when domestic football was dominated by the two Kolkata giants and arch-rivals, Bagan and East Bengal. More recent inspirations are Mehrajuddin Wadoo and Ishfaq Ahmed—both former India Internationals from Kashmir.

The emergence of small clubs on the national football scene is no longer a rarity. Take Minerva FC, Shillong Lajong FC and Aizawl FC, for instance. RKFC are the next chapter of this story.

Those who have watched the RKFC play in tournaments describe them as a competitive team. “The local players are very good. If efforts are put in by the owners and other institutions, they can be a very good team. In fact, it just proves that the gap between the big teams and small teams in terms of performance and talent is not so huge,” said football author and commentator Novy Kapadia, who thinks the Army could engage better with local youth by supporting the cause of football in the valley.

But the challenges small clubs face are huge—from getting better players, better facilities, retaining coaches and having a proper support staff, to be part of the “elite club” requires big bucks. “It's laughable,” said Meraj when asked about the club's annual budget. “What is the budget of Mohun Bagan?” He thought hard and said, “Our budget is probably two per cent of that.”

Financial limitations, however, have not affected the spirit of the club owners. With no assistance from the AIFF or the state government, Meraj depended a lot on “quiet support from his friends and friendly crowd funding”. He is an alumni of the St Stephens College in Delhi, and relies a lot on his network of friends all over India. “When we travel, my friends help me to sort out the team's stay in hotels and other logistics,” he revealed.

Meraj sounded off with a request to the J&K Football Association to open up the local super division league for outsiders. RKFC boasts of players from Sikkim and Punjab. Currently, only people from Jammu and Kashmir are allowed to play in the local league. “It's important for local players to have exposure by playing with players from other states.”