Perseverance rover is searching for signs of ancient microbial life 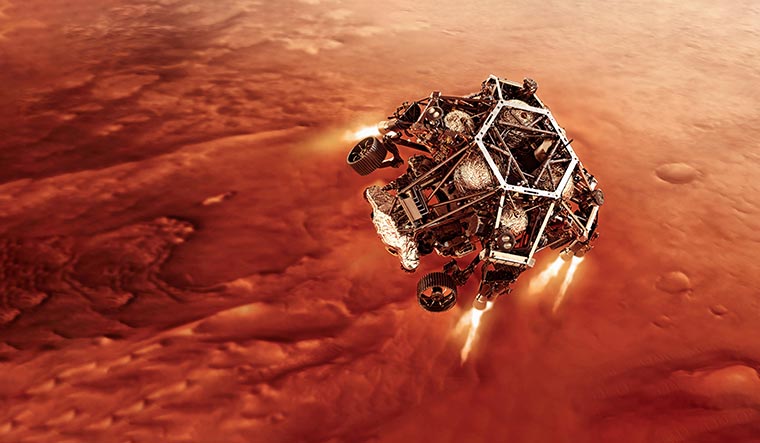 NASA's Perseverance rover that landed on Mars 10 months ago, has made some startling discovery. Scientists have discovered that the bedrock that their six-wheeled explorer has been driving is likely formed from volcanic lava.

Previously the team had thought the layered rocks which Perseverance took photos of were sedimentary.

Scientists are hopeful of accurately dating critical events in the history of Jezero Crater—a dry, wind-eroded depression, where the Perseverance rover landed—and the rest of the Red Planet.

Nasa’s Jet Propulsion Laboratory (JPL) has also concluded that rocks in the Jezero Crater have interacted with water multiple times and that some rocks contain organic molecules.

The preservation of organics inside ancient rocks does mean that there could be signs of life, in past or present. “This is a question that may not be solved until the samples are returned to Earth, but the preservation of organics is very exciting. When these samples are returned to Earth, they will be a source of scientific inquiry and discovery for many years,” said Luther Beegle, SHERLOC principal investigator at NASA’s Jet Propulsion Laboratory in Southern California.

There are both biological and non-biological mechanisms that create organics. So, the presence of organics is not yet a confirmation that life once existed in the Jezero Crater.

A key objective for Perseverance’s mission on Mars is astrobiology, including the search for signs of ancient microbial life.

The rover is collecting samples of Martian rocks using three dozen titanium tubes while exploring a four-square kilometer patch of the Jezero crater floor. Mars Sample Return seeks to bring select tubes back to Earth, where generations of scientists will be able to study them with powerful lab equipment far too large to send to Mars. The mission, seeking to bring samples of Martian rocks, soils and atmosphere to Earth for detailed chemical and physical analysis, is being planned jointly with the European Space Agency.

Scientists are successfully using Ingenuity helicopter to perform a series of test flights in the extremely thin atmosphere of Mars, which is less than 1 percent of the density of Earth's. The helicopter, which flies on its own, without human control, can fly for up to 90 seconds, move to a distance of 300 meters at a time and about 3 to 5 meters from the ground.