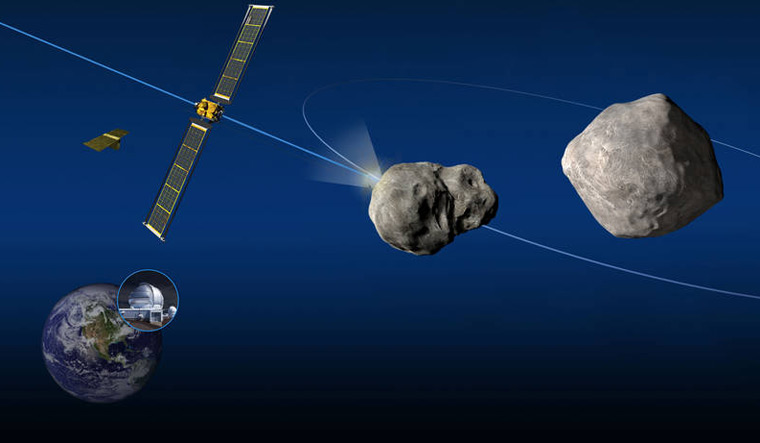 A schematic of the DART mission | NASA

US space agency NASA on Thursday provided details of progress in preparation for what it termed the world's "first planetary defence test mission". The mission involves launching a spacecraft called the Double Asteroid Redirection Test (DART).

DART will head towards a small asteroid called Dimorphos, which is orbiting a larger companion asteroid named Didymos. Dimorphos is a 'moonlet' of Didymos. DART will crash into Dimorphos to slightly change its orbit. While neither asteroid is a threat to the earth, the DART experiment will prove a "spacecraft can autonomously navigate to a target asteroid and kinetically impact it," a NASA statement explained.

Nancy Chabot, a planetary scientist and the DART coordination lead at Johns Hopkins Applied Physics Laboratory in Maryland, explained the relevance of the DART experiment in a press conference on Thursday.

"If there was an asteroid that was a threat to the Earth, you'd want to do this technique many years in advance, decades in advance. You would just give this asteroid a small nudge, which would add up to a big change in its future position, and then the asteroid and the Earth wouldn't be on the collision course," she was quoted as saying by Space.com.

The NASA statement said engineers will begin mating the DART spacecraft atop a SpaceX Falcon 9 rocket from November 10. NASA is eyeing the launch of DART from the Vandenberg Space Force Base in California late on November 23. The launch window will run till February next year.

According to an earlier NASA document on DART, "After separation from the launch vehicle... it will intercept Didymos’ moonlet in late September 2022, when the Didymos system is within 11 million kilometers of Earth, enabling observations by ground-based telescopes and planetary radar to measure the change in momentum imparted to the moonlet."

While Didymos is 780 metres across, Dimorphos is about 160m wide.