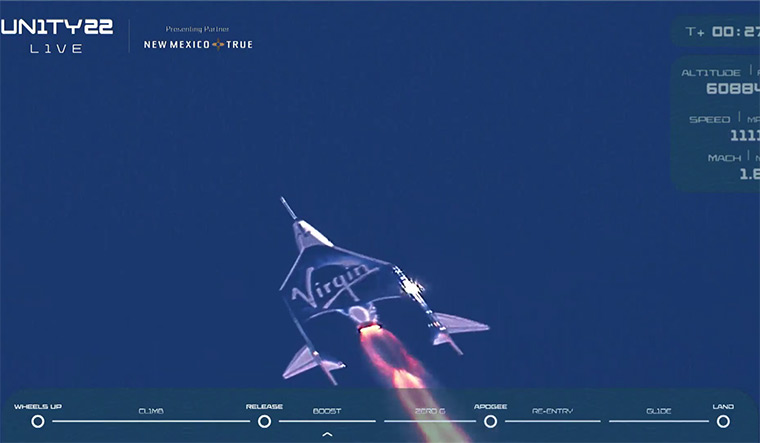 In a brief video released before the launch of Unity22, billionaire entrepreneur Richard Branson, 70, donned his navy blue (and sleekly designed) spacesuit. A dubbed-over voice-over said his mission statement was to “turn the dream of space travel into a reality. For my grandchildren, for your grandchildren, for everyone”.

On July 11, Branson made history for his 17-year-old company, Virgin Galactic, as it achieved its first fully crewed trip to space and back.

For those who are sceptical of the “billionaire space race” and the advent of space tourism (for the wealthy), his words may seem a sort of apology—the first breed of space tourists will have far more capital to spare than the majority of the human population (a Virgin Galactic ticket is expected to cost around $250,000). Space is not for everyone. But the reasons for that are less to do with human inequality and more with the sheer logistics of escaping the earth.

As Unity22 fell from its airborne carrier, it represented the passing of one of the biggest hurdles of launching an object from earth to space—sending something upwards vertically from the ground. With the use of a mothership that is already airborne at 44,000 feet (13,400 meters) up, the hurdle of getting past the first 13 kilometres is already passed. The air-launch saves on fuel, allows for a sleeker ship, and is one of the reasons a trip on a Virgin Galactic flight still costs a couple of decimal points less than an equivalent trip with SpaceX or Blue Origin (though those missions will take one even deeper into space).

The spaceship itself, borne underneath the mothership Eve, released and fired its rocket motor to streak straight to space. Its maximum altitude is roughly 55 miles (70 kilometres), with three to four minutes of weightlessness provided.

The launch event, hosted by Stephen Colbert, took place later than expected due to inclement weather.

The twin-fuselage mothership Eve (named after Branson’s mother) carrying the VSS Unity 22 took off from the launchpad at Truth and Consequences in Sierra County, New Mexico. A 45-minute flight saw Eve slowly climb to an altitude between 40,000 and 50,000 feet.

The Kármán line—at about 80-100 kilometres above sea level—was breached courtesy the rocket engines of the VSS Unity. For a few minutes, the crew and Branson experienced weightlessness, watching the earth from space, before the ship made its descent back to earth. A feed was expected from space but this did not occur. With multiple cameras onboard the ship, these visuals are expected soon.

With 17 windows onboard the VSS Unity, its passengers get possibly the first tailored space experience—earlier space flights focused mostly on scientific missions, rather than on sightseeing. In addition, the cabin is designed to allow passengers to enjoy the experience of weightlessness.

The main goal of this flight—besides the immeasurable value of optics (Branson is the first among the billionaire space tycoons to make it to space)—is to evaluate the cabin and customer experience onboard a fully-crewed Virgin Galactic flight. To this end, the Unity 22 mission—VSS Unity’s 22nd test flight and Virgin Galactic’s fourth crewed space flight—will include four mission specialists alongside Branson and the two pilots.

Beth Moses, Chief Astronaut Instructor at Virgin Galactic, will serve as cabin lead and test director in space, overseeing the safe and efficient execution of the test flight objectives.

Colin Bennett, Lead Operations Engineer at Virgin Galactic, will evaluate cabin equipment, procedures, and experience during both the boost phase and in the weightless environment.

Indian-origin Sirisha Bandla (Astronaut 004), Vice President of Government Affairs and Research Operations at Virgin Galactic, will be evaluating the human-tended research experience, using an experiment from the University of Florida that requires several handheld fixation tubes that will be activated at various points in the flight profile.

The University of Florida tweeted a video of the samples that Bandla will be fixing in space.

Finally (& here is where it gets exciting) the top is added and the KFT & the samples are handed off to @SirishaBandla who both takes these to space & has the important job of fixing the samples during flight using the activation lever@virgingalactic @UFExplore @NASA_Technology pic.twitter.com/PxLJ8XnPOU

Branson himself (Astronaut 001) will evaluate the private astronaut experience and will undergo the same training, preparation and flight as Virgin Galactic’s future astronauts. The Company will use his observations from his flight training and spaceflight experience to enhance the journey for all future astronaut customers.

The rocket plane—which requires two pilots—glided to a runway landing at its Spaceport America base.

Virgin Galactic reached space for the first time in 2018, repeating the feat in 2019 and again this past May, each time with a minimal crew. It received permission from the Federal Aviation Administration last month to start launching customers.

Not the first space tourists

Russia (then the Soviet Union) was the first nation to send a satellite into space. And while space tourism may seem the domain of Western companies like SpaceX or Virgin Galactic today, modern Russia has managed the same by making use of some of its ageing supersonic interceptors.

The Mig-31 and MiG-29 jets have both been used to ferry passengers near the edge of space, via the “Edge of Space Flights”.