Behind the billionaire space race: Private players try to conquer the final frontier 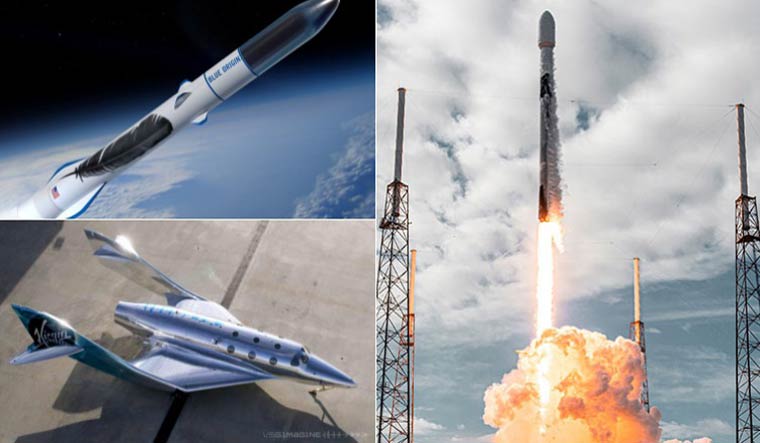 Rakesh Sharma, Kalpana Chawla and next, Sirisha Bandla: Regardless of the players and stakes in the ever-evolving international space race, Indian astronauts have had a role to play.

The three journeys of the Indian and Indian-origin astronauts represent markedly different stages of humanity’s forays into space exploration. Sharma’s ascent took place during the original “Space Race” between the United States and the Soviet Union; Chawla did so in a time of growing internationalising of space exploration—and Bandla will take off amid a new space race, fought between billionaires, in pursuit of trillions.

That space travel is costly should come as no surprise: Everything from the price of research and development to the cost of the formerly single-use rockets puts launches in prohibitive territories—affordable only to the nation-state, which had to have a good reason for each and every launch.

This changed with the advent of Elon Musk and the symbolic launch of his personal Tesla Roadster into space. While a single-launch could still cost up to $150 million a pop, that was still $250 million less than its nearest competitor, the Delta IV Heavy.

Further, Musk promised that his business could grow more cost-effective still, making use of re-usable rockets like the Falcon 9, economies of scale (with more launches, aided by a NASA contracts to supply the International Space Station as well as one to send a rocket taking astronauts to the moon), and perhaps the most powerful factor in space travel: Momentum.

With the momentum of successful launch after launch, as well as the renewed global attention on space travel, Musk has in part achieved what he first set out to do when he travelled to Russia in 2001 in hopes of acquiring a used rocket to send a plant or animal to space—regenerated interest in space travel that waned following the Apollo 11 missions.

However, Musk is not alone and his success has inspired others—including some with even deeper pockets. Enter the billionaire space race.

A billion dollars has long been considered an inconceivable amount of money—far more than what one needs for more terrestrial purposes. No car, yacht or even house (besides Antilia and Buckingham Palace) exists that a billion cannot buy. The amount dwarfs most human constructions. It seems almost natural, then, that it would be billionaires that are the ones making the most interesting moves in space.

From Richard Branson’s bid into space tourism with Virgin Galactic to Jeff Bezos’s bid at being an alternative to SpaceX (NASA can’t rely wholly on a single commercial provider, something members of the US Congress have also stressed), billionaires are each eyeing a different slice of the space pie.

While Bezos may have the most heft as the richest of the group (Musk managed only temporarily to displace him as the world’s richest), wildcard Richard Branson managed to upshot him by announcing his own trip to space ahead that of Bezos—nine days ahead, to be exact.

Bezos hoped to set his own record with the space journey of Wally Funk, who at 82 will become the oldest person to go to space when she accompanies Bezos on his July 20 spaceflight. Branson, with over 600 reservations in the pipeline for his space tourism foray, will be tagging along with Indian-origin Sirisha Bandla and four others.

The fourth billionaire in the game is Russian-Israeli Yuri Milner, whose Breakthrough Starshot eyes another lofty goal—interstellar space travel at one-fifth the speed of light, courtesy hundreds of lasers that can “propel” a solar sail.

Chinese billionaire Li Shifu has also announced a foray into the final frontier—the chairman of Geely (which owns Volvo) has already built a sci-fi looking structure in China’s Xinjiang region. GeeSpace has more earthly goals in mind, seeking to build and control a satellite network that could serve not just China but all the countries that will partner in the ambitious Belt and Road Initiative (BRI). With plans to offer satellite-based internet to those in BRI nations, Shifu could end up being the Chinese mirror of Musk.

There are other billionaires with their eyes on space—but as passengers. Eccentric Japanese billionaire Yusaku Maezawa made headlines when he offered eight seats on board a SpaceX flight to the moon, fully paid for by him.

One thing that stands out in a comparison of the space billionaires, however, is how far ahead one of them appears in the race: Musk. Whether it is in developing platforms that can make the journey there and back again to building a planet-wide satellite internet network (Starlink) to enabling space tourism to planning both moon and Mars missions, SpaceX is increasingly the world’s most dominant player in space.

Hailing from Gunthur, Bandla comes from a family of science graduates. Her role in the Unity 22 flight will be a research-oriented one. As per the mission profile, she will be testing several handheld “fixation tubes that will be activated at various points “.

As Vice-President of "Government Affairs" at Virgin Galactic, Bandla had led Virgin Galactic's efforts on policy, regulation and the business developmetn program for scientific payloads. While the flight will be mostly a symbolic affair, it paves the way for the hard business of space travel. Virgin Galactic hopes

Reflecting the different approach taken by Virgin Galactic, the flight will be air-launched from the carrier aircraft “White Knight Two”—a quadjet cargo aircraft that can offer passengers several seconds of “weightlessness” before their actual space-flights.

The launch—Virgin Galactic’s fourth and its first with a crew of four—will see a spacecraft air-launch from White Knight Two and travel up to 80-90km above the surface of the earth. This will give passengers a few minutes in microgravity in the area above the Karman Line (which NASA recognises as the boundary 80km above sea level—the Federation Aeronautique Internationale however set this at 100km).

The decision by Branson to fly in his company’s own spacecraft—always a risky venture—comes after Bezos himself planned the same in Blue Origin’s new Shepard rocket, scheduled to fly him and his brother to space on July 20.