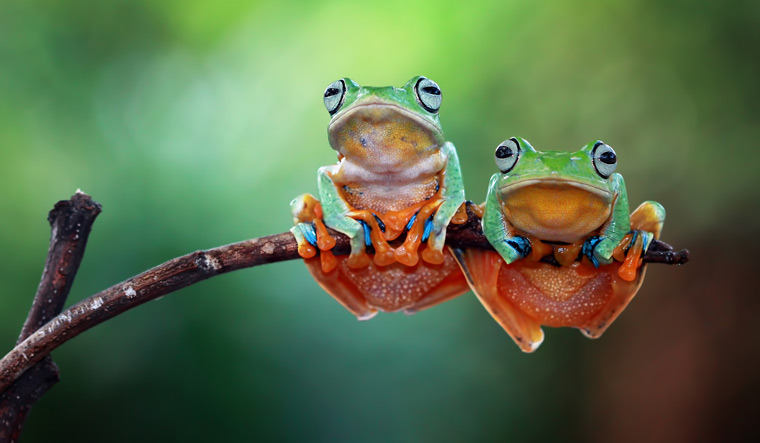 Researchers from India and the US have discovered five new species of shrub frogs from the Western Ghats, one of the globally recognised biodiversity hotspots.

The frogs, belonging to the the Old World tree frog family Rhacophoridae, were discovered by researchers from University of Delhi and Kerala Forest Research Institute and University of Minnesota as part of a long comprehensive study on the Shrub frogs (genus Raorchestes) of the Western Ghats, carried out over a period of nearly 10 years.

Researchers said the new species were identified and found to be distinct based on multiple criteria, such as their external morphology, DNA, calling pattern, behaviour, and other natural history observations.

The findings are published in a scientific article titled 'An integrative approach to infer systematic relationships and define species groups in the shrub frog (genus Raorchestes), with description of five new species from the Western Ghats, India'.

The authors are Sonali Garg, Robin Suyesh, Sandeep Das, Mark A Bee, and Prof S D Biju and it is published in the current issue of the International journal PeerJ.

The study was carried out under the leadership of Delhi University Professor Biju.

While one of the new species called Raorchestes drutaahu (Fast-calling Shrub Frog) was discovered from two localities: Kadalar in Idukki district and Siruvani in Palakkad district of Kerala, another one named Raorchestes kakkayamensis (Kakkayam Shrub Frog) was found only in the vicinity of Kakkayam dam in the southern state.

The species is named after young nature lover Keira Sabin, in appreciation of the long-time support and commitment of the Andrew Sabin Family Foundation towards amphibian research and conservation around the world.

Raorchestes sanjappai (Sanjappa's Shrub Frog), a beautiful green shrub frog, was discovered from the Wayanad region of northern Kerala.The species is named after Dr M Sanjappa, a renowned Indian Botanist and former Director of the Botanical Survey of India.

TheRaorchestes vellikkannan (Silver-eyed Shrub Frog) was discovered in the Siruvani hills and adjoining regions of the Silent Valley National Park.

The name is derived from Malayalam 'velli' (meaning silver) and 'kannu' (meaning eye), referring to its distinct silver eye colour.

According to the researchers, over 80 per cent of the globally known shrub frogs are restricted to the Western Ghats, and most species are known to have narrow geographical ranges.

For the first time, male calls for as many as 48 species of shrub frogs were studied, they said.

According to the study, the shrub frogs of the genus Raorchestes exhibit highly unique and diverse eye colour and patterns.

Biju, who is the head of Department of Environmental studies in Delhi University, said the study was a testament to how little is known about the most threatened group of vertebrates in India.

"Shrub frogs are among the most researched groups of frogs in India, with frequent new discoveries being made over the past two decades.Yet, we are far from fully understanding their existing diversity and uniqueness."

"Our work has once again added new insights on what we thought we knew about this group of frogs, from how to identify different species and their affinities to each other, to where they live and how vulnerable they may be to various anthropogenic threats," he said.

Scientists are now tracing potential evidence for population decline of the five newly discovered species, and any threats that they may be facing within their known ranges, in order to protect them from extinction.

"It is an unfortunate fate that scientists call as the nameless extinction," said Sonali Garg, the lead author of the study.