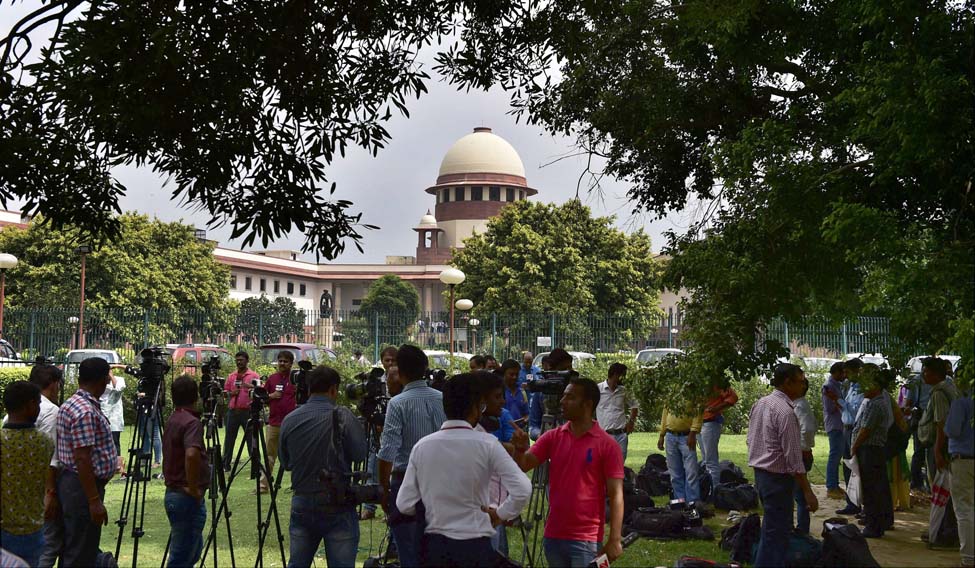 The startling  press conference held by four judges of the Supreme Court of India on Friday (January 12),  wherein they communicated  their anguish over the selective manner in which the Chief Justice of India was exercising his prerogative as the master of the roster has led to an unprecedented crisis for the Indian Republic.

The fact that this tectonic development has occurred in the run up to the Republic Day on January 26 when India showcases its democratic credentials heightens the gravity of the crisis and the constitutional impasse it will  create – unless this show of no-confidence in the CJI  is resolved amicably and swiftly within the four walls of the Supreme Court.

There appears to be a slender silver lining to this tectonic development. On Saturday (January 13) , one of the four Justices Kurian Joseph observed in Kochi: “There is no need for outside intervention to solve the matter because it is a a matter that occurred within an institution. Necessary steps would be taken by the institution itself to sort it out.” He further added that he ‘believes the issue has  been settled.’  In the same spirit, Justice Ranjan Gogoi, another member of the dissenting quartet noted that ‘there is no crisis.’ For the record, Gogoi is expected to take over as the next CJI when the current Chief Justice Dipak Misra retires in October.

The nature of the press conference is unprecedented  but it does not come as a surprise to those who are familiar with the inner workings of the Supreme Court – and the many distortions and transgressions that have been accumulating over the years. The ‘bench-fixing’ alluded to by the four dissenting judges was the tip of the ice-berg and both the enormity and the gravity of the charges made cannot be ignored or diluted.

Justice Chelameswar who, addressed the press on Friday, stated with deep anguish the compulsion that led to their unprecedented step – a dilution of institutional integrity and a corrosion of judicial rectitude.  He said, "We owe a responsibility to the institution and the nation. Our efforts have failed in convincing the CJI to take steps to protect the institution."  He further added : "Even this morning, the four of us went and met the Chief Justice of India and tried to persuade him to accept that certain things are not in order and that he should take remedial measures. Unfortunately, we couldn't convince him. We  four judges  are convinced that unless this institution is preserved and (is allowed to) maintain its equanimity, democracy will not survive in this country or any country.  The hallmark of a good democracy is an independent and impartial judge.”

The fact that one case pertaining to the death of the CBI judge B.H. Loya had come up for brief mention as being part of the internal discord among the judges has led to some intemperate and shrill commentary in the audio-visual medium.  A political dimension was accorded to the dissent of the four judges and  many unwarranted aspersions cast on their integrity. This is deplorable and unwarranted.

The rot within the Supreme Court is not of recent origin and did not begin with the current CJI. If anything, the tipping point may have been the developments of the last few months.  It merits recall that as far back as 2011 – that is six years ago – a former judge of the Supreme Court, Justice Ruma Pal had cautioned her peers about the many inadequacies and institutional transgressions that blighted the profile of India’s highest court – the most revered dispenser of justice for the citizen of the Indian republic.

Delivering the fifth V.M. Tarkunde Memorial Lecture on November 10, 2011 in Delhi, Justice Pal slammed the higher judiciary for what she called the seven sins. She listed them as:  turning a blind eye to the injudicious conduct of a colleague; hypocrisy -  the complete distortion of the norm of judicial independence;  secrecy -  the fact that no aspect of judicial conduct including the appointment of judges to the high and Supreme Court is transparent; plagiarism and prolixity -  meaning that very often SC judges lift whole passages from earlier decisions by their predecessors and do not acknowledge this -  and use long-winded, verbose language; arrogance of the personal nature -  wherein the higher judiciary has claimed crass superiority and independence to mask their own indiscipline and transgression of norms and procedures; professional arrogance -  whereby judges do not do their homework and arrive at decisions of grave import ignoring precedent or judicial principle; and finally nepotism - wherein favours are sought and dispensed by some judges for gratification of varying manner.

This combination of  professional ineptitude and worse – moral turpitude  among  some of the black sheep in the highest echelons of the judiciary is well-known among the custodians of the law but it is an uncomfortable reality that has been swept under the carpet. One had occasion to discuss this matter with the late Justice J.S. Verma, a former CJI (1997 – 98)  in the aftermath of the Nirbhaya gang-rape  review, about the state  of the Indian judiciary.  Pointing to the enormous backlog that clog the system,  Justice Verma  dwelt with considerable sadness about the lowering of the benchmark of judicial rectitude and propriety in India and was less than optimistic about any meaningful redress.

As of mid 2016, more than 2.8 crore  cases were pending across the district courts of  India  and any of them make their way to the higher courts for review and appeal. Thus justice delayed has become the norm in India and the tussle between the executive and the Supreme Court about the appointment of judges has added to the tangle.

The efficacy of democracy and its daily rhythms,  as manifest through efficient and equitable governance, directly affect the well-being of the citizen. The situation in India is far from satisfactory and the law is interpreted and applied in a selective manner. The rich and politically  powerful  have a more indulgent yard-stick applied to them and high profile cases such as that of liquor baron Vijay Malaya testify to this blatant double-standard.

Today the highest temple of justice stands tainted and exposed.  The old adage of  “ if it ain’t  broke – don’t  fix it”  can be varied to read as:  “ it is broke – and we don’t know how to fix it!”

One can only hope that the eminent judges of the Supreme Court can arrive at the appropriate consensus,  to begin the task of cleaning the stables and save the Indian republic from the dark , malodorous cloud that is threatening to engulf it and  bury the lofty vision of January 1950.

Views expressed in this article are solely those of the author and do not necessarily represent the views of the publication.

Your form could not be submitted.
This browser settings will not support to add bookmarks programmatically. Please press Ctrl+D or change settings to bookmark this page.
Topics : #Supreme Court | #judiciary