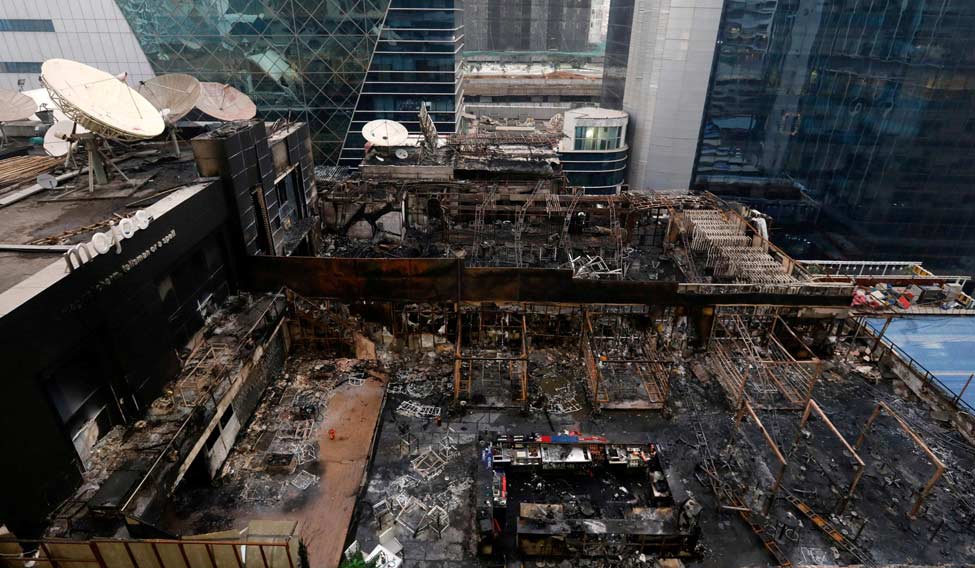 The Mumbai civic administration has cracked down on restaurants and started razing unauthorised constructions, in the wake of a fire at a rooftop pub in central Mumbai's Lower Parel which snuffed out 14 lives.

A BMC official confirmed that they have pulled down "illegal roofs" of two restaurants-'Skyview Caf' and 'Social' in Kamala Mills and encroachments of 'Pranay' and 'Fumes' and 'Sheesha Sky Lounge' at Raghuvanshi Mills in the same locality.

Action was also taken against some restaurants in Andheri, the official said.

"We have already formed several teams and are collecting information about the hotels and restaurants, after getting complaints of unauthorised constructions by them. Several ward officers are also carrying out inspection and razing such illegal structures," BMC spokesperson Ram Dotonde said.

The inferno at '1 Above' rooftop pub in Lower Parel in the early hours of Friday brought back memories of the fire that broke out in City Kinara restaurant in Kurla in October, 2015 in which eight people were killed.

Meanwhile, the city civic body has also directed its officials to form teams to ensure that all the restaurants are fire safety compliant in view of the New Year celebrations.

The team will inspect all the restaurants in their respective wards and ensure that they are fire compliant, the message said.

The premises should have fire escape routes, staircases and ensure open spaces are encroachment free, it added.

The Mumbai civic body had on Friday suspended five officials, including those attached to the G-South ward for dereliction of duty. There are allegations that civic authorities turned a blind eye to construction irregularities and violation of fire safety norms in the compound.

Mumbai mayor Vishwanath Mahadeshwar had said an inquiry had been ordered and strict action would be taken against errant officials.

Meanwhile, the Shiv Sena, which is at the helm of affairs in the BMC, in its mouthpiece 'Saamana' lamented on Saturday the lethargic attitude of the administrations across the world towards issues of fire safety, as it cited the examples of fire incidents at Mecca, London.

The party admitted that the incidents of fire in Mumbai had gone up in the last two years.

"The nexus of civic officers and employees, with the owners of premises that caught fire, resulting in the loss of lives has been debated extensively," it said.

Your form could not be submitted.
This browser settings will not support to add bookmarks programmatically. Please press Ctrl+D or change settings to bookmark this page.
Topics : #Mumbai | #Maharashtra