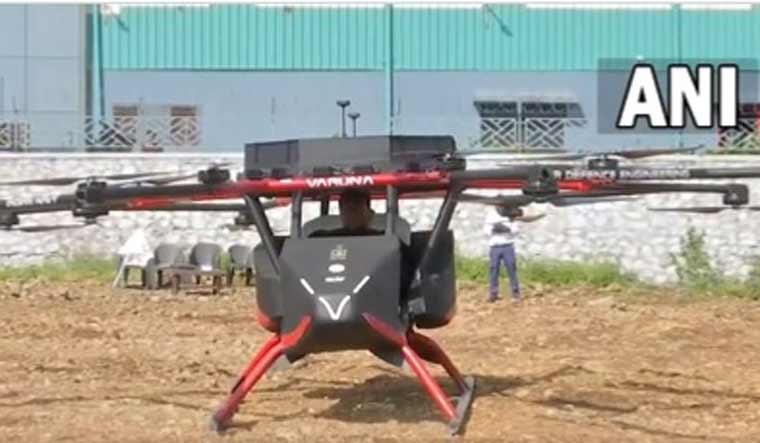 An Artificial Intelligence-based unmanned aerial platform is set to replace the cumbersome and risky ship-to-ship or expensive helicopter transfers between platforms of the Indian Navy while sailing out at sea.

The drone—named ‘Varuna’ after the Hindu rain God—weighs just 190 kg but can carry cargo of up to 130 kg. Fully laden, it will weigh 320 kg.

The Indian Navy has ordered 10 such platforms which are expected in a couple of years. “While the prototype, tailored to the Indian Navy’s requirements, is to be ready in about a year, all 10 ‘Varunas’ will be supplied in two years' time,” Mridul Babbar, co-founder of Sagar Defence Engineering Private Limited, the Pune-based company that makes the ‘Varuna’, told THE WEEK on the phone.

“It means human beings can also be quickly transported from one ship to another in the middle of the seas not to speak of other cargo including equipment.”

The drone has immense significance for transfers from Navy ships to shore stations and vice versa.

Currently, the Indian Navy’s mid-sea transfers involve two warships sailing close to each other at the same coordinated speed while ropes are lowered and linked between the two to enable transportation. Or in other cases, helicopters are used, making the operation relatively risky, expensive and logistically complicated.

Powered by chargeable electric batteries, the ‘Varuna’ can operate in an area of about 20-25 km and has an endurance of about 25-33 minutes.

Enabled for vertical take-off and landing, the drone is controlled by a single operator who issues the commands.

Costing between Rs 6-7 crore apiece now because of initial investments, the price of one such unit is expected to come down drastically to about a few lakhs once the volumes pick up.

Not just for the military, the ‘Varuna’ has huge implications for use in civilian life too. Says Babbar: “In future, it can be used as air taxis or ferry air cargo. It has huge potential to operate as air ambulances with people being ferried to the roof-tops of the nearest hospital.”