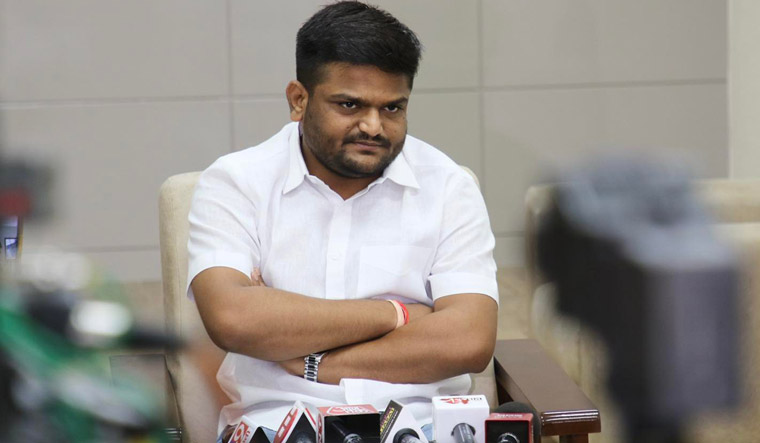 Expressing displeasure over the Gujarat Congress's “style of functioning”, party leader Hardik Patel on Wednesday claimed that he was sidelined in the state unit and the leadership is not willing to utilise his skills.

Interestingly, Hardik, who is the state Congress working president, expressed his grouse a day after he hinted at contesting elections after the Supreme Court stayed his conviction in a 2015 rioting and arson case.

Hardik had spearheaded the Patidar community campaign in Gujarat in 2015, seeking reservations under the OBC category.

Speaking to reporters on Wednesday, Hardik questioned the Congress leadership over the “delay” in inducting popular Patidar leader Naresh Patel into the party fold.

“The kind of talks that are doing rounds regarding the induction of Naresh Patel in Congress is insulting for the entire community. It's been over two months now. Why has no decision been taken yet? Congress high command or local leadership should take a quick decision about Naresh Patel's induction,” he said.

Hardik claimed that the Patidar quota agitation helped Congress win a significant number of seats in the elections to local bodies in 2015 and the 2017 assembly polls when the opposition party had won 77 constituents in the 182-member House.

“But what happened after that? Many in Congress also feel that Hardik was not properly utilised by the party after 2017. It may be because some people in the party would think that I would come in their way after 5 or 10 years if I am given significance today,” claimed Hardik Patel, who became working president of Gujarat Congress in 2020.

Assembly elections in Gujarat are due in December this year.

“Congress benefited because of us (Patel community) in the 2017 polls. Now, as I am seeing on television the party wants to induct Naresh Patel for the 2022 polls. I hope they do not search for a new Patel for the 2027 elections. Why does the party not utilise the people they already have?” asked Hardik.

He asked the party leadership to not “insult” him.

When asked about Hardik's comments about Naresh Patel, Gujarat Congress president Jagdish Thakor said the party is ready to welcome him.

“The Congress is ready to welcome Naresh Patel. The ball is now in Naresh Patel's court. We held discussions with him in the past too and urged him to join the party. But, ultimately, the final decision will be taken by him only,” he told reporters.

Thakor also said a meeting will be held with Hardik to understand his grouse.