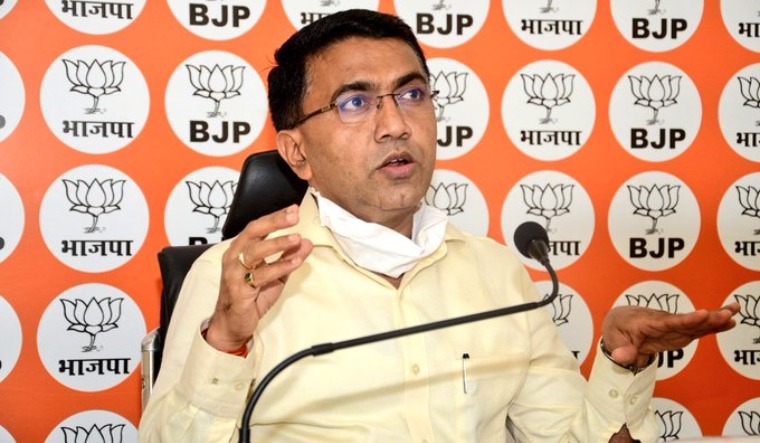 Utpal and Babush both filed their nomination on January 27. Before filing the nominations, both of them sought blessings of Goddess Mahalakshmi, most prominent Hindu deity in Panjim. Supporters who accompanied Utpal easily outnumbered those who accompanied Babush. But Babush looked confident whereas Utpal, being a first-time entrant to electoral race, looked tense.

Feliciano and Antoinette D’souza, a senior citizen couple living in Panji for more than a decade had an interesting take on the fight between Parrikar’s son and Babush. “Utpal is a kid, a novice to the electoral fray. He has sympathy of the people because he is son of Manohar Parrikar. In case of the other candidate (they did not take Monserrate’s name), he has criminal cases against him. Educated and well-meaning people cannot overlook these cases as they are serious charges. What is a guarantee that he will not be convicted after getting elected,” said the couple. Does that mean they favour Utpal? Antoinette clearly favours AAP for the clean record of its candidates, Feliciano was not much forthcoming and did not open his cards.

Moving away from Panjim and into Bardez region, Michael Lobo of the Congress has clearly taken charge of the Congress campaign in that region where seven assembly seats are located. Congress had no hopes from Bardez until Lobo joined the party as he was upset with the BJP because it was not willing to give a ticket to his wife Delilah (nor did the BJP allow her to contest as independent) from Siolim constituency. If Lobo manages to win at least four of the seven seats for the Congress, that will make big difference for the party and Lobo could then stake claim to become deputy chief minister if Congress manages to form the government.

Neighbouring Bardez region are Sattari, Bicholim, Sakhli and Pedne where nine assembly seats are located. The BJP has upper hand in these seats. Ranes--health minister Vishwajeet and wife Dr Deviya--will pocket Valpoi and Poriem. CM Pramod Sawant is comfortable in Sakhli, so is Speaker Rajesh Patnekar in Bicholim. There will be a tough fight in Mandrem where Dayanand Sopte is pitted against BJP rebel and former CM Parsekar.

The only region left in north Goa then is Tiswadi which has five assembly seats including Panjim. The BJP is relying heavily on Babush Monserrate to work his magic in this belt. Babush’s wife and revenue minister Jennifer is a candidate from Taleigao in Tiswadi. Uday Madkaikar, once a close friend of Babush and a staunch Congressman, was hoping to get Congress ticket from Panjim. But Congress instead brough Elvis Gomes (former state convenor of AAP) who belongs to south Goa into Panjim and gave him a ticket just because he was municipal commissioner of Panjim corporation. This angered Madkaikar, so he has decided to stay away from Congress campaign. He, however, wants to settle scores with Babush and hence he and his group have extended full support to Utpal Parrikar. How useful this support turns out to be can be judged only on March 10 when the results will be out.

Advocate Amit Palekar, AAP’s chief minister face for Goa is contesting from Santa Cruz in Tiswadi region. He is pitted against Antonio Fernandes of the BJP. Fernandes is considered as Monserrate’s candidate so BJP expects him to ensure the former’s victory. On the other hand, Palekar has taken up campaigning in all sincerity. He is focusing on door-to-door campaigning in the constituency.

Interestingly, in Tiswadi region, the BJP denied ticket to another son of one its top Goa leaders- union minister Shripad Naik. It was the trio of Parrikar, Parsekar (now BJP rebel from Mandre) and Naik who laid the foundations of the BJP in Goa backed by the then RSS Sangh Chalak for Goa Subhash Velingkar. Naik’s son Siddhesh wanted to contest from Cumbarjua constituency. He had tried hard in 2017 as well but was denied a ticket. This time, too, he has been denied ticket. The ticket of Cumbarjua has gone to Janet Madkaikar, wife of sitting legislator Pandurang Madkaikar who also happens to be a very close friend of Monserrate.

Moving to south Goa, this is where the Congress is expected to do well, especially in eight-nine seats of the Christian-dominated Salcette region. South Goa has 21 seats in all, of these eight-nine seats in the Salcette have been vote bank of sorts for the Congress. Even Parrikar could not breach the bastion of Salcette through his Mission Salcette   Unfortunately for the Congress, Mamata Banerjee’s TMC has been focusing on this region and so is AAP. TMC has some heavyweights contesting in south Goa. Churchill Alemao from Benaulim, Churchill’s daughter Valanka from Navelim. TMC is working hard to spoil the Congress’ party here.

In the south Goa region, the BJP is banking on the traditional strongholds of Maharashtrawadi Gomantak Party (MGP) which has allied this time with TMC. The BJP has given strong candidates in the seats were MGP is contesting. Devendra Fadnavis, BJP’s goa election in charge, has termed TMC as anti-Hindu party. “By joining TMC, MGP, too, has become anti-Hindu party,” said Fadnavis. MGP has been the oldest Hindu party of Goa. However, in recent years it is being run like a family firm by Dhaulikar brothers--Sudin and Deepak. That is one of the reasons why Hindu votes of MGP shifted to BJP in significant numbers in the recent years.

It is in south Goa that the anti-incumbency will hit the BJP hardest, say political analysts. To add to its woes there are issues like rebellion by Savitri Kavlekar, wife of deputy chief minister Chandrakant Kavlekar and vice president of BJP’s women wing. Savitri had been working for the BJP sincerely ever since her husband quit Congress in 2019 and joined BJP government as deputy chief minister. She built networks in Sanguem constituency where she wanted to contest. She had asked for a ticket from Sanguem. Her husband, too, lobbied hard for her but the BJP leadership did not budge. Sanguem ticket was given to Subhash Phaldesai. Chandrakant Kavlekar who is contesting from neighbouring Quepem has been given responsibility of Sanguem too. Now Savitri has rebelled and is contesting as independent. So Kavlekar is in a state of dilemma.

There are still two weeks to go and the situation can change very easily as campaign picks up. The constituencies of Goa are very small, each having 30,000 voters approximately. A shift of even 70-80 votes from a village or a community can make or mar fortunes here and hence candidates are more dependent on personal touch during the campaign. Both Congress and the BJP have identified 20-22 seats each where they are campaigning with all their might, all in the hope to reach the magical figure of 21 in the 40-member state assembly.