To open or not to open: What experts say about school closures during pandemic 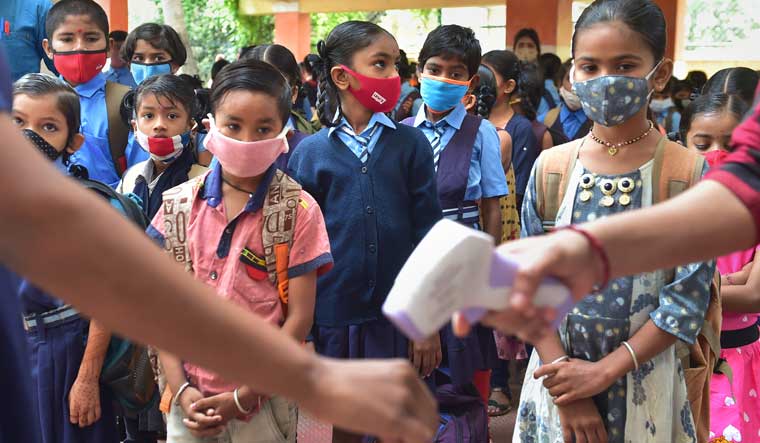 Open. Shut. Open. Shut. Open....A pattern most schools have been forced to follow in the past two years given the unpredictability, infectivity and rising cases of the novel coronavirus and its variants. The first and second waves of the pandemic led schools to completely shut down in-person teaching and take learning online. Post the end of the second wave, there was some relief in that a number of educational institutions went back to normal working while following mandatory Covid protocols. But then again, hardly after a month or two had passed, the Omicron variant raised its ugly head and forced students to go back to online learning.

Now, again as a number of states are reporting a dip in the average daily Covid positive cases, governments are again contemplating reopening of schools. On January 20, Chief Minister Uddhav Thackeray's government in Maharashtra announced that schools in Mumbai and in the rest of the state will reopen from January 24 for classes 1 to 12 while adhering to Covid-19 protocols, especially given that the state has been witnessing a constant decline in cases. In Mumbai daily cases dropped below 10,0000 for the first time in two weeks while the case positivity rate fell from an average of around 22 per cent over the past week to 13.7 per cent this week.

Yet, in several other states that are witnessing a surge in Covid cases, schools continue to remain shut. States such as Delhi, Haryana, and Uttar Pradesh had reopened the schools for some classes at the beginning of the year, but with a spike in cases they had to close down again. Delhi is currently undergoing a seven-day average of over 18,000 cases. Last year in November students of all grades could attend schools in person but last week, the Delhi government ordered the closure of all schools as it implemented the yellow alert of its Graded Response Action Plan amid a spike in Covid-19 cases.

However even now, reopening of the schools is subject to decisions by schools and local authorities. It is not mandatory that parents send their wards to school on a daily basis. Those who wish to send their child to school are to fill in a consent form, upon which it is expected that in case the child were to catch Covid-19, it will be the responsibility of the parent alone. Given that children have been homebound for long, some parents are willing to take the risk.

Schools meanwhile have been adapting to changing modes of teaching ever since the pandemic first began. Yet, now especially in the third wave what most schools are facing is staff shortage as many teachers have tested positive. "Although schools have been shut for long, our teaching did not get affected in terms of imparting of education, although the mode changed. Now, with the high transmission rates of the Omicron, the problem we are facing is staff shortage with teachers either in isolation or in quarantine," says Shalini Jaiswal, principal of St John's Universal School in Mumbai's Goregaon.

When they opened last year in September, parents and children both had shown remarkable interest and the school had high number of students from secondary and senior secondary attending." Yet, she says, this time her school will go ahead with the hybrid teaching model at least for "sometime" which means classes will be held simultaneously online and offline for children who are attending in person and otherwise. "We have an audio-visual system installed in all classrooms which will help students learn well, whether online or offline, but both, at the same time," says Jaiswal. Once a child tests positive, as per protocol, the entire class will get suspended for the next fortnight. Four teachers are presently under quarantine at her school.

Meanwhile psychiatrists say that students will also take time to adjust to a fully offline mode, hence they, too, support a hybrid mode of learning for now. "When schools reopened for the very first time in September last year after a period of more than 1.5 years, it was observed that children were used to the online mode of education and a lot of them had attention issues as they tried to adapt to the physical classroom," says consultant psychiatrist Avinash Desousa.

"Secondary school students showed a remarkable decline in their handwriting and were also seen experiencing anxiety issues with regard to socialising in larger groups which they haven't been used to in the last nearly 24 months. Hence, I suggest that we do a hybrid model of education for some time wherein the positives of both, online and offline are merged together and children can experience a seamless re-entry into regular learning. Note exchanges on school WhatsApp groups, assignment sharing on Google Classrooms etc. must be continued while focus is given on offline mode of teaching and learning."

According to Vellore-based virologist T. Jacob John, "there was need to shut the schools in the first place." Omicron is not going to bother children very much, he says, and so "closing down schools does not solve the problem."

He added: "But it is an emotional response that something had to be done and the easiest thing for the government to do was to shut the schools. Transmission of the virus in schools will happen. But by now, the entire staff at schools must have been vaccinated with both the doses or ideally should be, given that we have had vaccines from the beginning of January 2021. Hence, schools must ensure safety in their premises and reopen as soon as possible."

Experts believe that vaccines are in place in order to save lives and to ensure that society can function normally. Hence, when all adults are vaccinated, children have "nothing to fear," say experts.

“For students, a school is not just about studying, it is a place where they learn life skills and this experience is not possible through online mode of education. As schools reopen, we need to take some time to settle children and focus our attention on those who might have suppression anxiety. It is necessary to listen to their worries and the problems they encounter. Schools must implement bridge courses to cover learning loss and integrated systems to be future ready," says Sumeet Mehta, Cofounder and CEO at LEAD, which has designed a safety handbook for parents and schools.