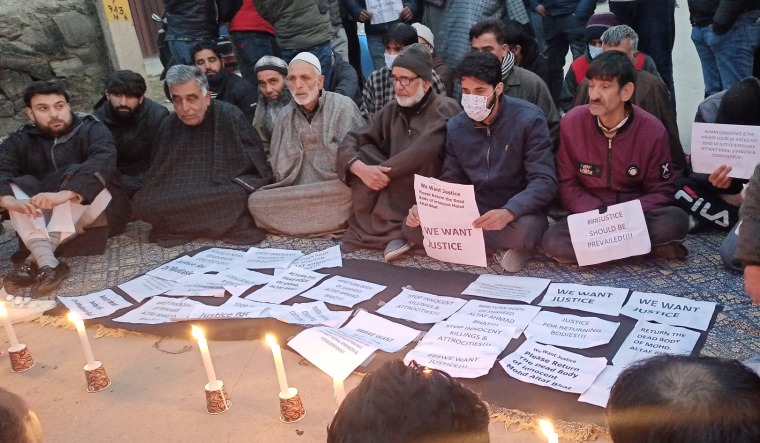 (File) Protesters demanding return of the bodies of people killed in Hyderpora encounter. The bodies of Dr Mudasir Gul and Altaf Bhatc were exhumed at Handwara and returned to their families for reburial | Twitter handle of PDP

Jammu and Kashmir Police, on Thursday, said a youth from Jammu had been staying with a foreign militant for a long time in the room of Dr Mudasir Gul.

Police said investigations into the Hyderpora operation in Srinagar revealed that Altaf Bhat, the owner of the building where the operation was carried out, was killed in the crossfire after he was used as a human shield by a foreign militant, Bilal Bhai, who along with a youth from Jammu, Amir Magray, was staying in the building, in the chamber of Gul. Bilal, Magray and Gul were the three others killed during the operation.

The family of Bhat and Gul had accused the police of killing the duo in cold blood, and rejected the charges that they were involved in militancy.

Addressing a press conference, DIG (Central Kashmir) Sujit Kumar Singh, who was heading the special investigations team (SIT), said the CCTV footage and other evidence revealed that Bilal used Bhat as a human shield. He said the CCTV footage showed that Gul was moving around in Srinagar with Bilal in his vehicle.

He said the footage and other evidence show Magray was accompanying Bilal during the attack on police at Jamalata in Srinagar.

Singh said Magray often travelled to Bandipora and Gurez, and these travel are still being probed.

“Prima facie evidence shows that Dr Mudasir Gul was shot dead by the foreign militant on the directions possibly from across.”

“Two pistols and four magazines were recovered from the encounter site.”

He said Bhat’s family hasn’t answered their questions about who was living on rent in the building, the rent deed and how the rent was paid. “There are no satisfactory details from Altaf’s family.”

The encounter turned controversial after family members of Bhat and Gul contested the police’s version of what happened during the operation. The two families also staged a protest at Srinagar’s Press Enclave to demand the bodies of Bhat and Gul for burial.

Political leaders, including Mehbooba Mufti and Omar Abdullah, had supported the demands of the two families.

The bodies were exhumed at Handwara and returned to their families for reburial at their ancestral graveyards. Maray’s father had also sought his body for reburial but his appeals were not entertained.