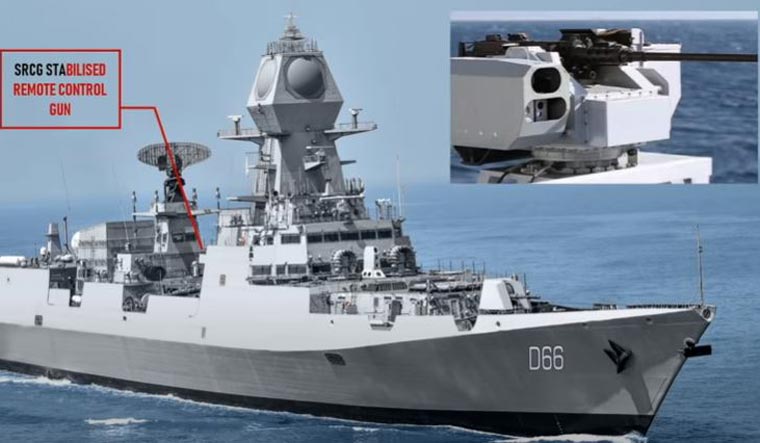 Last month, the Indian Navy commissioned its most advanced destroyer, the INS Visakhapatnam.

One does not need to be a defence buff to be impressed by the scale and sleek lines of the Visakhapatnam and its menacing weapons like the 76mm main gun, anti-submarine rocket launchers and BrahMos missiles.

The INS Visakhapatnam gives the Indian Navy world-class air defence capabilities. This is due to the combination of its MF-STAR phased array radar—which can detect scores of enemy aircraft and missiles hundreds of kilometres away—and MR SAM (Medium Range Surface to Air Missile), which can shoot down airborne targets, including supersonic anti-ship missiles. The MF-STAR is a radar developed in Israel, while the MR SAM was developed jointly by DRDO and Israel Aerospace Industries.

The Visakhapatnam has another Israeli-origin weapon system that has not attracted much publicity. A video on the construction and layout of the Visakhapatnam, shared by the Indian Navy on November 21, showed that the ship had been fitted with an SRCG (Stabilised Remote Control Gun). To a layperson, the SRCG appears like an innocuous contraption—a gun fitted with an oversized CCTV camera!

The Ordnance Factory of Tiruchirappalli had handed over to the Indian Navy and Indian Coast Guard the first batch of 25 SRCG systems in June. The SRCG was built under a transfer-of-technology pact with Israeli company Elbit.

A source told THE WEEK that the first lot of SRCG systems had been distributed to various commands of the Navy and were being retrofitted to ships. The Visakhapatnam is among the first newly inducted ships that comes with the SRCG built in.

What exactly is the SRCG?

The SRCG is what experts refer to as a remote weapon system (RWS). In a maritime context, a remote weapon system is more than just a gun fired by remote control. Its computerised targeting system also factors in the roll and pitch of the ship and makes adjustments to its elevation and traverse settings to minimise errors in accuracy. A manually operated weapon cannot achieve minute adjustments on a moving ship.

Remote weapon systems are primarily designed to have high accuracy rather than fast firing rates. So systems like the SRCG can fire a few hundred rounds of ammunition every minute, unlike the Visakhapatnam’s AK-630 guns. The AK-630 is a larger gun (with a calibre of 30mm) that can spew out up to 5,000 rounds a minute, enabling it to shoot down incoming anti-ship missiles.

The SRCG integrates a 12.7mm gun with a optronic camera and laser range finder. The sensors allow it to detect and track targets in any weather or at night. The SRCG is meant primarily to fire on small, fast-moving boats. Some navies are testing RWS with larger-calibre guns for use in anti-drone roles.

Why the remote revolution happened

Nearly all major navies have been inducting a large number of remote weapon systems in the past two decades. The US Navy in 2003 adopted a variant of the 'Typhoon' RWS, designed by Israel's Rafael, for deployment on its warships. The Typhoon system can use a variety of guns, ranging in calibre from 7.62mm to 12.7mm to 20mm to 25mm and 30mm weapons. 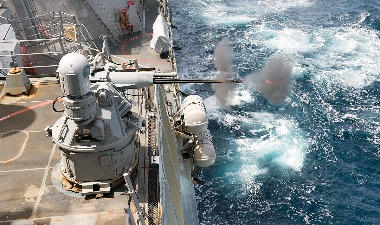 A MK 38 Mod 2 gun on a US Navy ship; the gun is a variant of the Israeli Typhoon RWS | Via Wikimedia Commons

The US Navy’s decision was prompted by an incident in 2000. In October that year, the USS Cole, an advanced destroyer, had pulled into Aden, Yemen, for refuelling. It was equipped with Tomahawk cruise missiles that could hit targets on land over 1,000km away and surface-to-air missiles to shoot down aircraft over 100km away. But the USS Cole was ill-equipped to take on a boat laden with explosives. The suicide bomb attack on the USS Cole by al Qaeda left 17 US Navy sailors dead. The incident also highlighted the threat that small craft posed to large warships, which were equipped primarily to fight other ships and submarines.

The Indian Navy has used RWS previously. The Super Dvora fast attack craft (FAC) India brought from Israel in the late 1990s were equipped with a variant of the Typhoon. The FAC class of ships, which displaced around 50 tonnes, were meant for operations in coastal waters. On the other hand, the SRCG is now being fitted to larger warships.

Sources told THE WEEK the SRCG was replacing the manually fired heavy machine guns on Indian Navy and Coast Guard ships. The SRCG would be primarily used in defending the ship when it was entering or leaving port and also operating in coastal regions (littorals).

The SRCG also has a role in open ocean for dealing with threats such as pirates. Sources said the pirate threat has existed in the past, “but just like they upgraded from swords to guns, pirates have now acquired weapons like heavy machine guns and rocket-propelled grenades”.

The sources noted that manned machine guns or heavy-duty weapons like the 76mm main gun or the fast-firing AK-630 guns were not ideal for firing warning shots to stop pirates or smugglers.

The heavy-duty weapons carry a high risk of causing collateral damage while the manually fired heavy machine guns would have lower accuracy and range. The SRCG, with its computerised aiming, is optimal for firing both warning shots and also hitting high-value targets like individual gunmen or specific parts of a ship/boat, such as its propulsion system, to stop it, without destroying the entire vessel.

The Indian Navy is also worried about the threat posed by terrorist groups. During the Sri Lankan civil war, the LTTE used small boats, called skiffs, as kamikaze weapons loaded with explosives that could ram into navy ships. The skiffs were difficult to pick up on radar. New remote weapon systems like the SRCG are not reliant on radar; their optronic sensors are able to detect even small targets several kilometres away.

As the nature of warfare changes and the Indian Navy's area of responsibility increases, spanning waters from Africa to Southeast Asia, weapons like the SRCG will become as ubiquitous as the BrahMos.