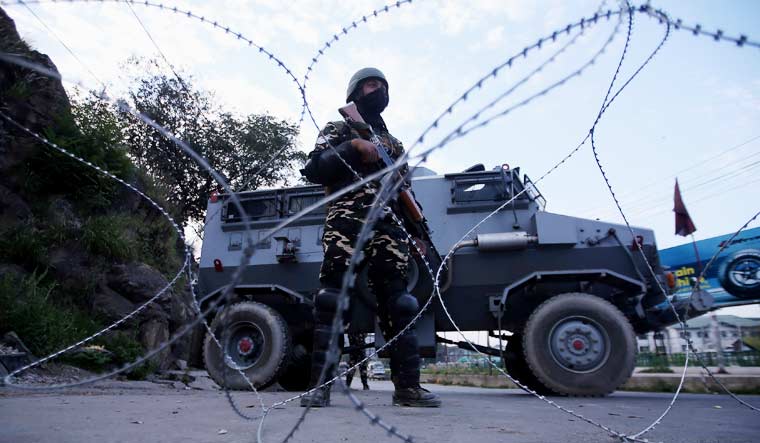 In September last year, the Jammu and Kashmir Police declared Srinagar, the capital of Jammu and Kashmir, as “militant free.” However, a year on, the district has witnessed several encounters and targeted killing of civilians.

Most of the civilian killings, including murders of members of the Hindu and Sikh community, have been blamed by the police on “hybrid militants.”

According to police, a hybrid militant is the member of a militant group, who has no police record and works under the radar. Such individuals are sympathetic to the militant cause and carry out targeted killings, including those of police.

Of late, the police have increasingly began using the term “militant associate” to describe those who provide some kind of help to militants.

However, rights activists like Muhammad Ahsan Untoo, chairman of International Forum For Justice and Human Rights, J&K, said the term ‘hybrid militant' is worrying and the security forces are using it to cover intelligence failures and arrest people at whim. “Action can be taken against anybody by labeling him as hybrid militant,’’he said.

Citing the example of the controversial Hyderpora encounter in which four persons were killed, he said as per eyewitness, two among the four, Altaf Ahmed Bhat, and his tenant Dr Mudasir Gull, were asked to accompany the police to a building during the search operations. They were killed along with the other two. After the encounter, IGP Vijay Kumar, in a press conference, said Gull was running an unauthorised call centre in the building. “One of the rooms was being used as a militant hideout,” he said.

However, the police explanation about what happened at Hyderpora has few takers. Questions are being raised about why Gull wasn't arrested earlier if the police knew he was a militant associate.

The police action against ‘hybrid militants' and 'militant associates’ has gained pace in the wake of targeted killing of civilians.

According to police, the ‘hybrid militants' come handy against soft targets like Umar Ahmed, who was shot on June 23 outside his shop at Habbakadal in Srinagar. A day before, a pistol wielding youth had killed inspector Parvez Ahmed Dar of the J&K Police’s CID wing at Kanipora Nowgam on the outskirts of Srinagar. The act was caught on CCTV. On June 17, a policeman was killed at Saidpora, Eidgah in Srinagar.

In October, the police said in a statement that it had killed a 'hybrid militant' when he was on his way to kill a shopkeeper in Baramulla in north Kashmir.

“During the intervening night of October 27-28, terrorists fired upon an Area Domination Patrol party (ADP) of the police and the Army's 46 Rashtriya Rifles in Cherdari area of Baramulla. The alert joint party retaliated effectively and in a brief shootout, one terrorist got killed,” the police statement said. The slain militant was identified as Javed Ahmad Wani, a resident of Kulgam. “As per the police records, the slain terrorist was part of a group involved in the killing of two non-locals in Wanpoh area of Kulgam along with the terrorist Gulzar who was neutralised on October 20,” the police said.

On November 12, police said they arrested a hybrid militant, Arshid Ahmed, resident of Sehpora, Ganderbal, at a checkpoint near Khann area.