2023 Assembly election in Karnataka will be my last: H.D. Kumaraswamy 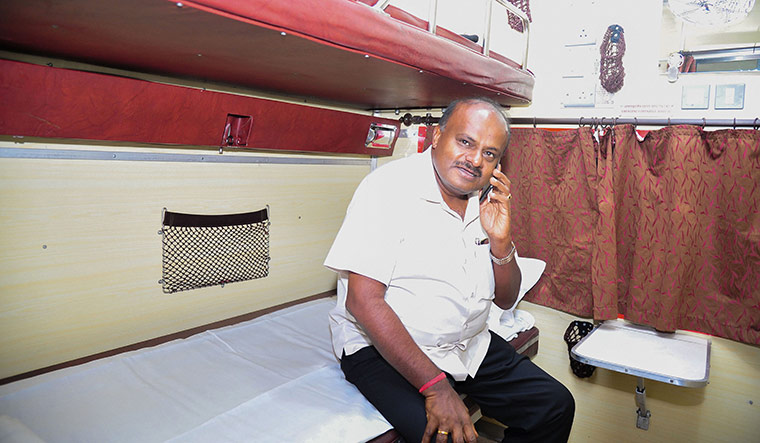 JD(S) leader H D Kumaraswamy on Tuesday said that the 2023 assembly elections in Karnataka will be his last, and sought an opportunity from the people to independently run a government for five years, so as to implement programmes for the larger public good.

Speaking to party workers and the public, he sought their blessings and support in bringing JD(S) to power independently, for implementing ''Pancharatna'', the five fold programme envisaged by him that include quality education, health, housing, farmer welfare and employment.

"I''m marching ahead with a challenge...I request you with folded hands to give us (JDS) an opportunity to run an independent government in this state for five years. I seek your blessings," the former Chief Minister added.

Pointing at farm loan waiver announced by him as Chief Minister of the Congress-JD(S) coalition government and a beneficiary farmer from Hangal inviting him for his housewarming ceremony, Kumaraswamy said... "but our farmers forget Kumaranna (as he is popularly called) while voting, this is the situation we are in."

"Give one opportunity to the party you have nurtured, bless us to form a government on our own strength, believing in me....If I don''t live up to my words on implementing Pancharatna, I will never come to you again, seeking votes for my party. Test us, you have seen both BJP and Congress," he added.

Kumaraswamy had headed a coalition government with both national parties in the past, for 20-months with BJP from February 2006 and with Congress for 14-months after the May 2018 assembly polls.

Earlier in the day, speaking to reporters, the JD(S) leader claimed that the recent Income Tax raids specifically on a person who is said to be former CM B S Yediyurappa''s Personal Assistant and Water Resources department related contractors, was an attempt by the BJP to "control" Yediyurappa, following his alleged late night meeting with Congress leader Siddaramaiah.

"Anyone with the slightest understanding of politics can understand that the recent IT raids were for what reasons....IT raids were with a political motive...it is to control or checkmate Yediyurappa...as both (Siddaramaiah and Yediyurappa) had a late night meeting about political developments, and the BJP that has government both at Centre and state got to know about it from their sources, and probably have tightened things," he said.